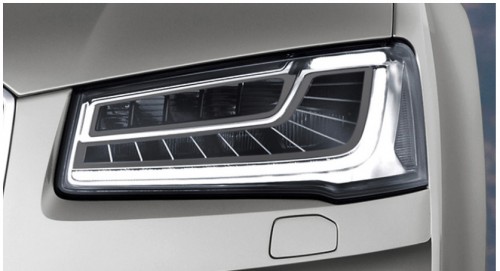 The new A8 from Audi has been put together by Ulrich Hackenberg the technical chief and Mark Lichte the design chief from Audi. Both want to put together a luxury saloon that will stand out against the competition in ability and presence.

There were six different proposals for the vehicle which were all looked at in the final and they were bu different designers. Two were by Fabrizio Giugiaro, and one each by Wolfgang Egger, Stefan Sielaff, Mark Lichte and Philipp Roemers. It was the Mark Lichte design that was chosen in the end although Sielaff’s design was very much admired as well. The new Audi A8 has the codename D5 and Lichte had a lot of input in it.

The final version of the car has not yet been seen but quite a bit of information has been leaked out. People who attend product strategy meetings have managed to get some information saying that there has been a combination of German solidity, Italian sportiness and British elegance put in to the design. It is expected that the car will be more progressive as well will a tapered back, coupe like greenhouse, single frame grille and architectural proportions.

The current car looks rather bloated and with jewel headlamps which are the only feature that stand out so not like a luxury sedan that can stand out. The D5 will not be that radical, using the PL65 platform rather than the Porsche designed MSB components. The PL65 and D5 exist together and this is actually a problem that has been caused by management error as well as a lack of control of finances and persistence from Ulrich Hackenberg. It did look like the MSB would be the platform chosen until he appeared on the scene and changed things; costing the company 3 billion Euros in the process.

However, after going it alone the Ingolstadt team eventually agreed amongst themselves and got approval for their idea after the Geneva motor show in 2014. It would have made sense for them to work together with Porsche but it was too late and would have proved too expenisve to make the necessary changes.

In order to spread this massive cost, the PL65 will also be used on other models. It will be used on the VW Phaeton Mk2 and also for a A9 Coupe which had been put on the back burners and is now back and will be a sporty four door car and an alternative for those who are not keen on the Q8 crossover which could be too ostentatious for some.

The car will break new ground in some ways. It will be more modular in construction, have new content and a focus on driving dynamics as well as new MMI. There will be three levels of autonomous driving as well as an advanced infotainment system. There will be new air conditioning systems, next generation drive select and on-demand torque vectoring. It will have a big TFT display on the multi-media control system as well as voice and gesture controls and more intuitive ergonomics.