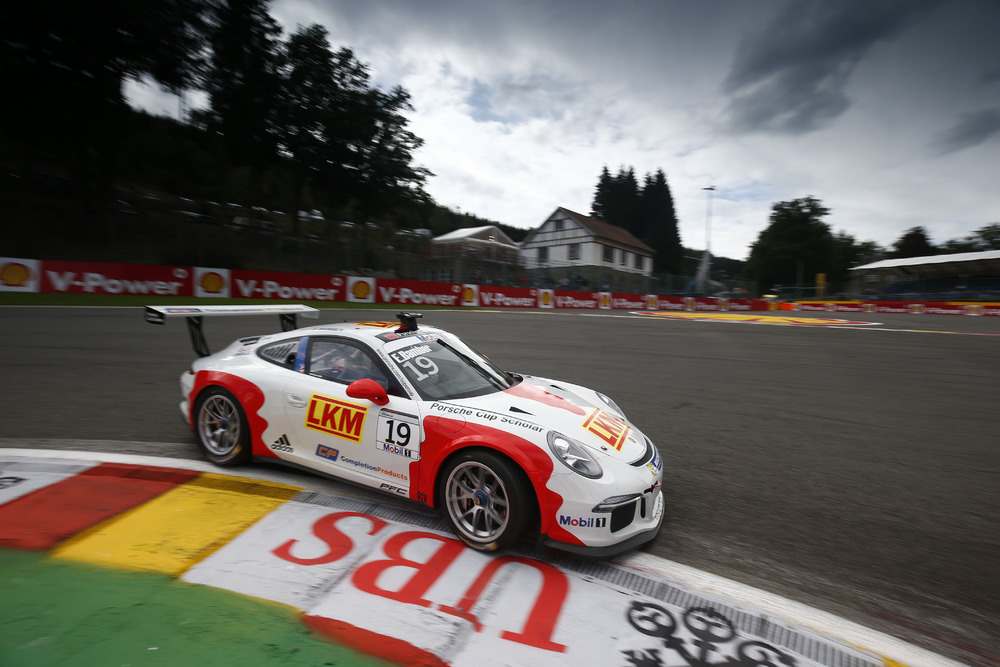 On the legendary race track of Spa, Earl Bamber (NZ/Fach Auto Tech) posted pole position in qualifying for the Porsche Mobil 1 Supercup. For race seven on Sunday, the New Zealander shares the first grid row with Nicki Thiim (DK/Walter Lechner Racing Team). “Spa is simply a crazy circuit! Although I’m sitting second in the championship, this is my first pole position in the Supercup this season. To be honest, I can hardly wait for tomorrow’s race,” said a satisfied Bamber, who receives special funding from Porsche as the winner of the Porsche International Cup Scholarship. Côme Ledogar (Pro GT by Alméras) from France set the third quickest time on the 6.973 kilometre Ardennes race track on Saturday.

The 30-minute qualifying session turned into a real challenge for the 27-strong field contesting the Porsche brand trophy series. Heavy rain had fallen in Spa during the morning leaving the track damp in several places. The pilots cautiously felt their way to the limit in their 460 hp Porsche 911 GT3 Cup with the session concluding in a furious pursuit for the fastest time. In rapid succession, the leaderboard changed with Bamber turning the quickest lap on the hilly Belgian circuit in 2:23.673 minutes, two minutes before the end of the session. Thiim was thrilled with his second spot: “It’s really good to take off from the first grid row. I’m happy with my time.” The French guest entrant Ledogar put in an impressive performance setting third. “Because of some wet patches, it wasn’t at all easy out on the track, but basically it’s fabulous to drive on this challenging circuit,” stated the 23 year old.

Not five minutes after the qualifying session, the 27 pilots were back in their team tents when a heavy downpour put half the paddock underwater. Porsche Junior Sven Müller (D/Team Project 1) didn’t let the changing weather conditions throw him off stride and in fact enjoyed the drive. “Eau Rouge is just awesome. If I’d been just a touch off, I’d have gone out. I’m very pleased with fourth on this difficult circuit.” Porsche Junior Klaus Bachler (A/Konrad Motorsport) posted fifth directly behind Müller. “I achieved a good starting position for the race and I’m feeling really optimistic because I won here last year,” concluded Bachler. The 23-year-old guest driver Maxime Jousse (F/Sébastien Loeb Racing) qualified his Porsche on sixth.

A top time eluded championship leader Kuba Giermaziak (PL/VERVA Lechner Racing Team) with the Pole taking up the race on eleventh. Porsche junior Connor de Phillippi (USA/FÖRCH Racing by Lukas Motorsport) heads into round seven from the thirteenth grid spot: “I had a problem finding my limit but at least it’s good that we can overtake here.” Just how close the competition is here is underlined by the fact that the fastest 15 qualifiers are all within a second. Not at all pleased with his performance was Porsche junior Alex Riberas (E/Mc Gregor powered by Attempto Racing): “Position 21 is nothing to write home about. I experienced problems with the car and now I have to take a close look at the data to see why.”