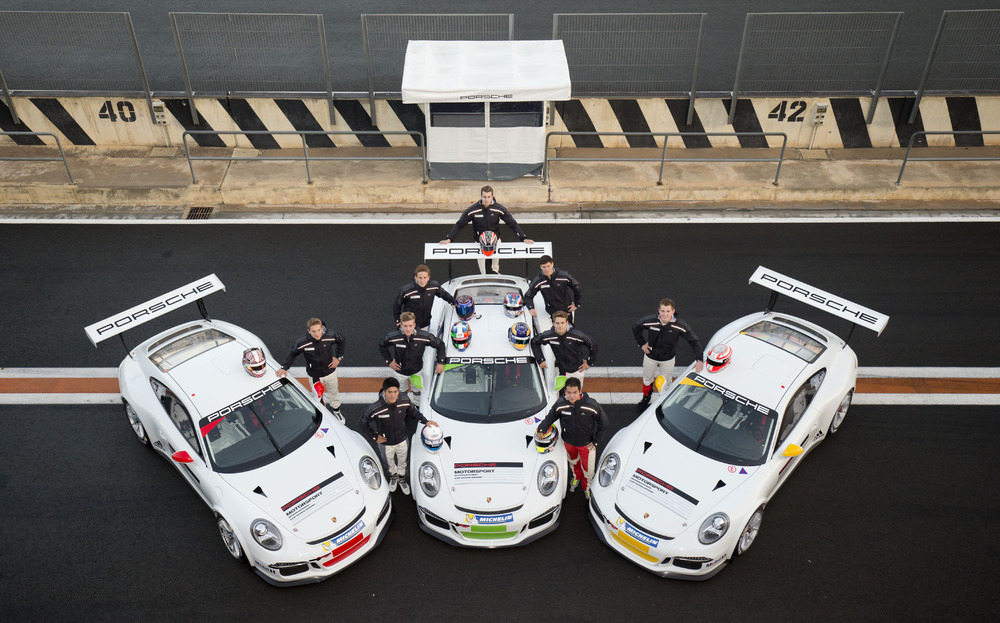 Nine drivers from eight countries have just one objective in mind: to become the scholarship driver in the Porsche Mobil 1 Supercup for the 2015 season. In the Spanish city of Valencia, candidates nominated by their national Porsche one-make series took part in a two-day selection process. On the “Circuit Ricardo Tormo”, pilots not only had to turn in good lap times, but were also evaluated on their character as a driver. The winner of the so-called Porsche International Cup Scholarship receives funding of 200,000 Euros. Moreover, Porsche provides a professional coach at all rounds as support to the Formula 1 and gives advice in the fields of fitness, psychological training and media relations.

The nine young talented race drivers pulled out all stops in the 460 hp Porsche 911 GT3 Cup to give the specialists there an idea of their speed. “We’ve witnessed some impressive performances here amongst the drivers and for us this confirms that there are many talented youngsters out there in our Porsche brand trophy series worldwide,” summarises the Porsche Mobil 1 Supercup manager Jonas Krauss after the two days in Valencia. “Now we need to take a look at the individual parameters over the coming weeks and determine who the best candidate is. But one thing is certain, it was already an honour for all the participants to be part of it.” In 2015, the winner will take over the scholarship from the current scholarship driver Earl Bamber. With the final round of the Porsche Mobil 1 Supercup still to run in Austin, America (31 October to 2 November), the New Zealander currently leads the overall standings.

These trials for talented youngsters enjoy a long tradition at Porsche Motorsport. Many pilots who receive funding from Porsche have managed the step up the ladder into international GT and prototype racing. The Porsche International Cup Scholarship gives drivers the chance to advance from the worldwide Porsche Carrera Cup series into the international Porsche Mobil 1 Supercup and continue on to top-level motor racing, for instance as a works driver. Consequently, the Supercup serves as a springboard for a career in professional motor racing.