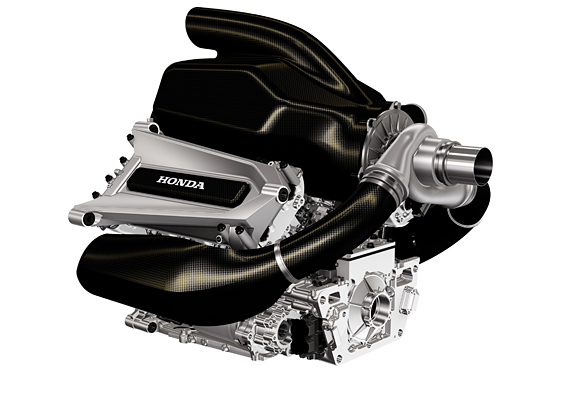 Honda has apparently hit back at rumours its 2015 F1 programme is facing delays. Italy’s Autosprint reported on Tuesday that, despite making an audacious bid to lure Fernando Alonso to McLaren for 2015, the Japanese manufacturer is three months behind in the development of its all-new turbo V6 ‘power unit’. Apparently hitting back at that speculation on Wednesday ahead of the Japanese grand prix at Honda-owned Suzuka, the carmaker revealed the first image of its 2015 engine (pict above).

At the same time, Honda’s F1 chief Yasuhisa Arai said the 2015 engine project is now entering the “prime phase” in Japan, and will now undergo “full-fledged bench tests” connected to the turbo and energy recovery systems. “In the meantime, our racing operation base in Milton Keynes, United Kingdom, has become fully operational,” he announced.

Not only that, Speed Week is reporting on Wednesday that Mercedes – McLaren’s current engine supplier – has given McLaren permission to debut the Honda V6 at the post-Abu Dhabi grand prix test next month. That is despite Honda’s Arai having said just weeks ago that the engine will in fact not make its debut until the first winter test of 2015 next February at Jerez.

“There is obviously a lot of work behind the scenes with our new partner for next year,” McLaren team boss Eric Boullier said recently in Singapore. “We have not exactly defined when and where we will test first, to be clear about some discussions and rumours. There is a lot of work going through and, to be honest, as per the original schedule, everything is fine so far.”