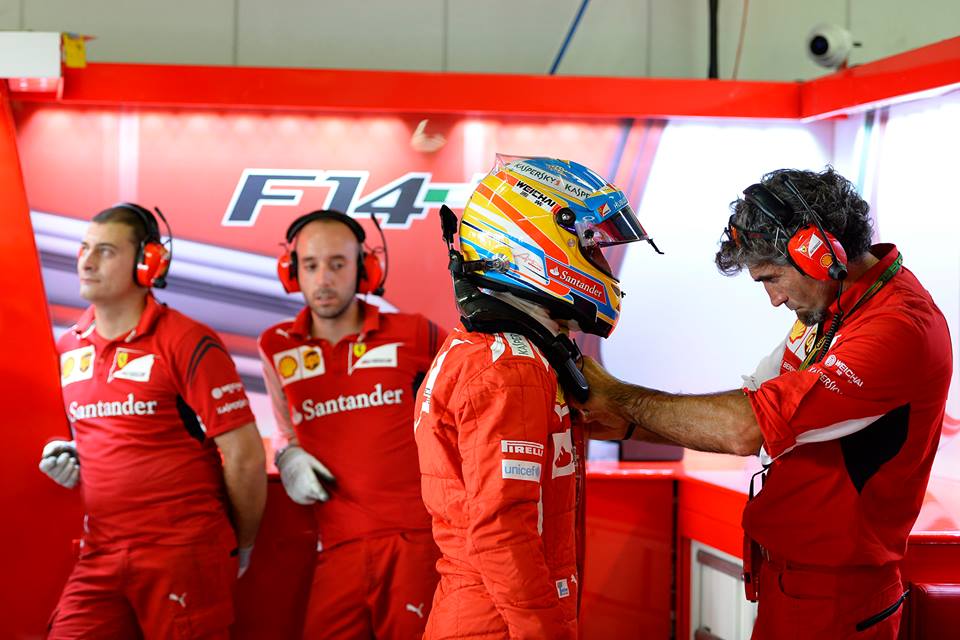 Fernando Alonso and Ferrari are on the cusp of announcing the Spaniard’s split, despite his contract for the 2015 and 2016 seasons. The Spanish publication Cope said the parties have now agreed to terminate the deal, amid speculation of an enormous EUR 50 million per year standing offer from McLaren.

“At this moment, in Japan, Alonso is discussing his future at Ferrari,” Luca di Montezemolo, still Ferrari’s president until Sergio Marchionne takes over later this month, said at the Paris Motor Show. “I am sure we will find the best solution for him and for Ferrari, whatever that may be,” Montezemolo added.

Authoritative media sources say the situation has progressed to the point that Alonso and his closest colleagues at the fabled Italian team are now beginning to say their goodbyes. “I must thank Alonso,” Montezemolo continued, “because whether he stays or doesn’t stay, he has done a lot for Ferrari. We have a contract and in the next few days we are going to take a final decision with a lot of respect for one another. If he says he will stay, we will be happy. If we decide together to end our collaboration, it will be in the best manner possible.

Also speaking in Paris, Sergio Marchionne also suggested that Ferrari’s marriage to Alonso is nearing an end. “Ferrari is more important than any partner,” he said. “Our priorities are well defined: the company, the brand and above all the people”.

Fernando Alonso and Ferrari are heading for a split at the end of the 2014 Formula 1 season, with McLaren now the Spaniard’s main target for next year. After relations between Alonso and Ferrari reached a critical point amid a major restructuring at Maranello, sources suggest that both team and driver now accept their future is apart. Alonso has grown impatient to secure the third F1 world title he so craves and wants to leave, while Ferrari is realistic that it will take at least two years to get back into championship contention. That conflict of a driver’s short-term ambitions and the team’s long-term realism has put them on different paths.

While a formal deal to end Alonso’s current contract, which runs until the end of 2016, is not yet ready to be announced, it is expected that the situation should be fully resolved within the next few weeks. Only a dramatic last-minute change of heart from either party will prevent their five-year relationship coming to an end.

Speaking at Suzuka on Thursday, Alonso made clear he would do what was best for Ferrari – which knows its focus must be on improving its infrastructure and car rather than worrying about driver politics. But he was adamant that he could not afford to throw away the best form of his career and not deliver results on track.

“I want to win and I’m ready to maximise the performance of this moment of my career that has been the best moment and I feel good,” he said. “I feel fit, I feel confident. “I’ve adapted the driving style to the new regulations every year, and I feel that I’m in the best moment of my career. Hopefully I can take the benefit of this in the next coming years and add some titles in the pocket and retire with more than two.”

It is understood that Alonso does not yet have a firm plan in place for 2015, but talks have opened up again with McLaren about a switch there. Alonso himself admitted that his mind was “already set probably” although he refused to expand more on what his options were.

Sources with good knowledge of the situation insist that while his discussions with McLaren are at an advanced stage, there is not yet a deal in place. McLaren has been open in the past about its desire to secure Alonso’s services, and if successful it will face the choice of dropping either Kevin Magnussen or Jenson Button for next year. Ferrari already has Kimi Raikkonen under contract for 2015, and has a number of options for who it slots in alongside the Finn. While it is believed to have longer term ambitions to sign Sebastian Vettel, the fact the German is under contract at Red Bull for next year means the Maranello outfit may need an alternative in the shorter term. Its protege Jules Bianchi is an option, but Nico Hulkenberg and Romain Grosjean have also emerged as more experienced contenders.