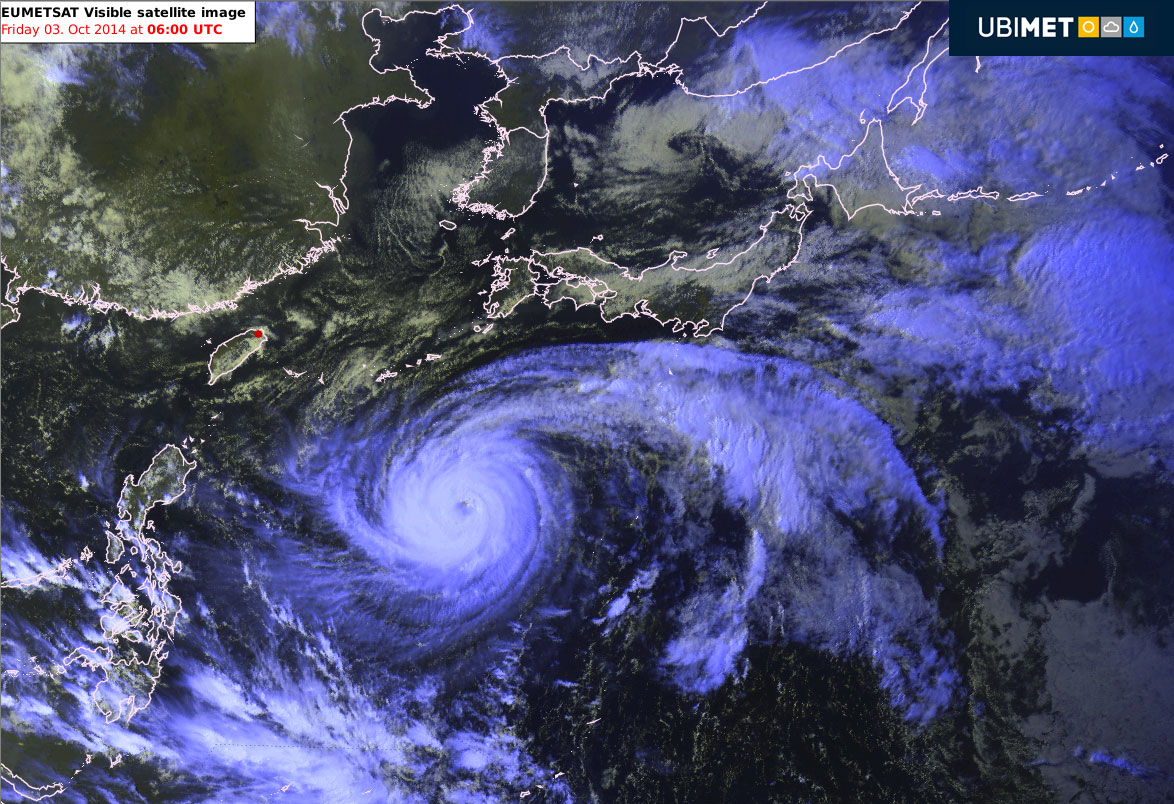 The imminent threat to Japan from Typhoon PHANFONE is gradually unravelling. The current forecasts from Formula 1 Weather Service UBIMET indicates the arrival of rainbands, these at times heavy, for Sunday and, with the centre of the Typhoon will pass close by on Monday morning with widespread transport disruption, structural damage and possible injuries.

For Sunday there are no significant changes to previous UBIMET-forecasts. The rain will largely be persistent – possibly with an occasional drier interlude – but also it will become heavy at times, this more likely after midday. Thus, at the scheduled time by 15:00 local time (8:00 CEST), a wet race seems to be a likely scenario. The expert on-site meteorologists Steffen Dietz and Andy Swan expect the passage of the typhoon centre between the early and the afternoon hours of Monday. “Probably PHANFONE will pass to the southeast of Suzuka. There are also model solutions that can draw the eye directly on the race circuit. In both cases severe structural damage is expected on Monday, with possible widespread severe damage from the second case.”

But typhoon creates challenges for the Premiere in Sochi too. The huge mass of equipment that Formula 1 operates must be dismantled and packed up immediately after the race – Sunday evening into Monday (local time) and after that transported from Japan to Russia. The Grand Prix of Russia takes place on the following Sunday, October 12th. Keeping to this tight schedule will be wholly dependent on how the typhoon behaves and will surely be a tough challenge.

Saturday: A better day is in store with much clearer air behind the cold front, this giving plenty of sunshine and dry weather throughout the day. It will still be warm with a maximum of 26 degrees and a moderate, occasionally fresh, northwesterly wind. During the late afternoon cloud will begin to increase from the south.

Sunday: Forecasts did not change much for the period of the race. Taifun PHANFONE will likely turn to the northeast before reaching southern Japan. Rainshower bands will still affect Suzuka Circuit throughout the race and cloudy weather with partly heavy and persisting rain is therefore expected. Temperatures will reach around 20 degrees. The wind blows from southerly to southeasterly directions but will likely inhibit more severe wind gusts.

Monday: There is still some uncertainty concerning the exact track of the storm as soon as it will interact with an extratropical feature approaching from the west. Most likely scenario, which is also supported by the JTWC, is a more southerly course instead of the center moving across Suzuka. In this case, heavy and enduring rain as well as hurricane-force winds will still affect the transport of the equipment but a damaging wind event would be less likely.