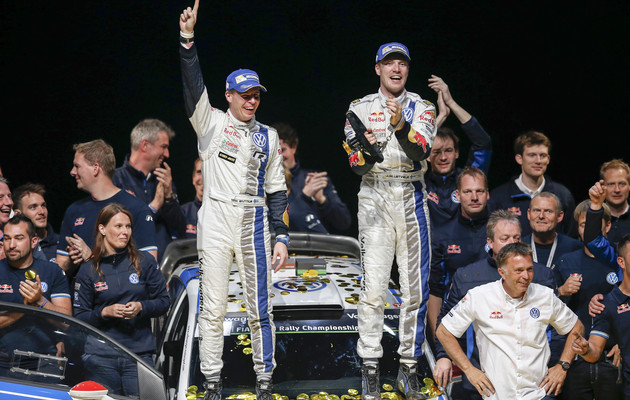 Jari-Matti Latvala and Miikka Anttila claimed their first-ever victory on asphalt today at Rallye de France Alsace, the Finns dominating the entire event in the Polo R WRC. Volkswagen stable-mates Andreas Mikkelsen and Ola Floene finished 44.8 seconds adrift in second position and the Citroën DS3 WRC crew of Kris Meeke and Paul Nagle completed the French podium.
In the FIA World Rally Championship for Drivers, Ogier continues to head the leaderboard but after a devastating home rally the Frenchman could only climb to 13th overall, however did manage to salvage three points in the Power Stage. As such, he and Latvala will take their fight for the world title to Spain in three weeks’ time. While the Manufacturers’ title has already been secured by Volkswagen Motorsport, the Citroën Total Abu Dhabi World Rally Team, M-Sport World Rally Team and Hyundai Motorsport continue their push for second position.

The final day of competition was the shortest and covered two loops of two stages and 63.38 competitive kilometres, but with no opportunity for service. With a 28 second advantage this morning Latvala was able to control the field and the Finn rounded off the perfect weekend with one additional point for claiming third position in the Power Stage. His win represents his fourth of the season, 12th overall in the WRC and he becomes the first Finn to win on Tarmac for the first time since Tommi Mäkinen claimed victory in the 1999 Sanremo Rally. Mikkelsen picked up his fifth podium of the season, and his career, and Kris Meeke contained any desire to push over the closing stages to take another podium and solid points for himself and Citroën.
After a fine run to fourth position, and a fastest stage time in SS12, Robert Kubica went off the road in the final stage, promoting Dani Sordo back up the leaderboard. Mikko Hirvonen was a close fifth, the Finn just 12 seconds adrift, and Elfyn Evans climbed from an overnight eighth to sixth ahead of Mads Østberg, another stage winner, who finished only 1.7 seconds further behind. Thierry Neuville and Bryan Bouffier were closely matched in eighth and ninth and Martin Prokop rounded off the top 10.
In the FIA WRC 2 Championship, Frenchman Quentin Gilbert and his Belgian co-driver Renaud Jamoul took the honours and in the Junior WRC Championship Alastair Fisher and Gordon Noble won in the Citroën DS3 R3T. The FIA Junior WRC Championship title was also claimed in France by Stephane Lefebvre and Thomas Dubois.
The penultimate round of the 2014 FIA World Rally Championship takes the contenders to the mixed surface RallyRACC Catalunya-Costa Daurada, Rally de España, where the fight for the world title will resume.
fia.com