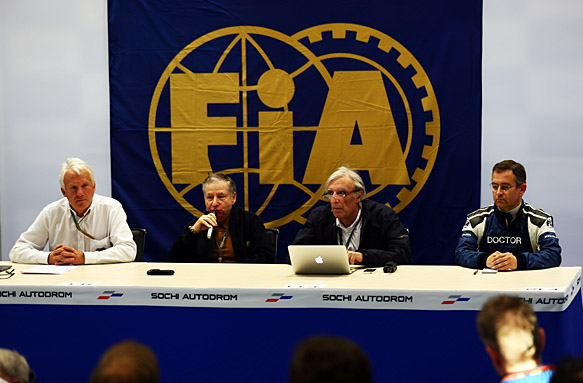 The FIA has revealed more details about the circumstances that led up to Jules Bianchi’s horrific Formula 1 accident at the Japanese Grand Prix. During a media briefing at the Russian GP on Friday, F1 race director Charlie Whiting ran through CCTV footage of the minutes before Bianchi crashed into a recovery vehicle. The video footage, taken from cameras overlooking Turn 7, showed the cars coming through the long left-hander in the closing stages of the Japanese Grand Prix.

With rain falling, the racing line appears to have less water on it – with worse conditions on the outside of the bend where cars are not running. The incident begins when Adrian Sutil runs wide onto the outside line of water and spins off.

Whiting said: “There is a dryish line. As the rain has intensified, a little bit of water creeps on to the drier line, and as cars go a little bit wide there, you see that Adrian got onto that and lost control. He touches that slightly wetter bit of track, and he is behind Jules at this point. When he hits that slightly wetter bit of track, he loses control and spins.”

A lap later, with double waved yellow flags being displayed, Bianchi hits the same bit of water. But unlike Sutil, Bianchi does not spin around. Instead, he attempts to correct the slide but over-corrects and spears straight off the track. Whiting added: “You can see Jules doing something similar. He hits the same bit of water, but there is a slight difference – he does not spin like Adrian did. He corrects and goes off at a slightly different trajectory.”

Bianchi’s car slides straight off the track and skips across a gravel trap before colliding with the recovery vehicle that is retrieving Sutil’s car. Whiting said that it was not yet possible to judge exactly what speed Bianchi hit the truck at. “It is a little too early because you don’t get any proper data from the car when it is going across gravel. GPS data is all you can rely on and you cannot rely on that very much. It is not a good idea at this stage until we have proper investigations, really analyse the footage and GPS data to see what the impact speed was. It would be too early to throw a figure out there and come back later and say it wasn’t quite right.”

The trajectory of Bianchi’s accident means that even if he had not hit the truck, it would still have been a sizeable accident with the barriers. “Looking at the first estimates of the speed of the car, I would say it would have been – with three row tyre barrier and guard rail –very similar to Heikki Kovalainen’s accident in Barcelona [in 2008],” said Whiting. “But that is a very rough estimate.”

Whiting said that initial analysis had ruled out mechanical failure for causing the crash.

The FIA will meet with Formula 1 teams at Sochi on Saturday to discuss implementing a yellow flag speed limit in the wake of the Jules Bianchi accident. With the initial report on the Bianchi’s Japanese Grand Prix crash having been given to FIA president Jean Todt, one of the key lessons to come out is that the speed of cars in caution zones needs to be better controlled.

Bianchi speared off the track after running wide on a wet part of the circuit when double waved yellow flags were being displayed to warn him that marshals were attending to Adrian Sutil’s crashed Sauber. F1 race director Charlie Whiting believes that grand prix racing needs to find a system where the speed of cars when double yellows are out is controlled by the FIA, rather than relying on drivers to do what they think is best. He has called team managers to a meeting at the Russian GP to discuss ways of introducing this for 2015.

“There are some things to learn and we want to engage with all teams and drivers to make sure we come up with good, sound and well thought through ideas,” said Whiting during a media briefing to discuss the Bianchi crash. One of the most important things for us to learn here is that it is probably better to take the decision to slow down away from drivers. It is better to try to put in place a system where it is much clearer to everybody how much we think cars should slow down in similar circumstances. That is what we are working on, starting tomorrow morning, with a meeting with all the teams to discuss exactly that. We want a way of trying to impose a speed limit – it probably won’t be a speed limit as such, but there will be a way of controlling speed with complete certainty and complete clarity.”

Whiting ruled out the idea of a strict speed limit, like the World Endurance Championship uses with its ‘Code 60’ concept, but said that use of a delta time that is currently used for safety car periods would be one way of achieving it.

“The difficulty of having a speed limit over a certain sector is that it will probably have to be different for certain sectors. One thing that would worry me slightly is the fact you can see how engineers and drivers push limits for pit lane speed limit, they would want to be braking at the last possible minute and as hard as possible to get down to the speed limit at the precise place – that is the nature of F1. The delta would be the same for everybody. They know what to do, they have same reference map so all have to slow down at the same time.”

While introducing a yellow flag speed limit is a longer term project, Whiting said that the FIA would be more cautious about how it deals with situations where recovery vehicles are on track from now on. When asked if changes would be made to tractors this weekend, he said: “There is nothing we can do to the tractors as such. All I can say is we will use them with extreme caution“.

Whiting also said that the FIA would investigate ways of mandating a skirt around recovery vehicles to prevent the possibility of F1 cars going underneath them – as Bianchi did.

“We had nearly an hour with the drivers earlier and one of the things that emerged from that and has been discussed, and can be rediscussed, would be some form of skirt. It is similar to the thing you see on trucks on the road to stop cars going under the side or under the back. That is something we would need to consider and are going to consider”.