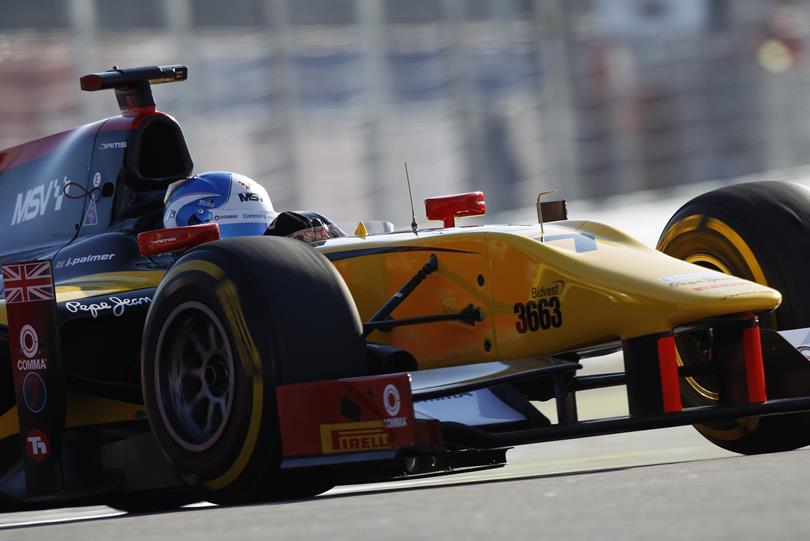 When the lights went out, Takuya Izawa made a blazing start from third to steal the lead from poleman and teammate Stoffel Vandoorne, but the Belgian re-claimed it going around the outside of Turn 2. Behind the pair, front row starter Arthur Pic was busy fending off Palmer and Evans with the Brit finding a way past the Frenchman and then Izawa to take P2. Evans also overtook Pic for fourth.
Vandoorne built a comfortable enough gap to Palmer – both men on the same tyre strategy having started on the softer compound. On lap 7, Stefano Coletti stopped on track and the safety car was deployed. ART told the race leader to box that lap, but the call came a bit too late and Vandoorne missed the pit entry. Palmer and Evans had more time to prepare and came back to the pits for prime tyres along with most of the drivers who were on the same strategy. Vandoorne knew from the moment that the win had most likely slipped away. He chose to stay out on soft tyres for as long as possible to try and build an advantage before boxing.
That’s also when the battle for the crown took a turn for the worse for Nasr: the Brazilian who had started from P12 had managed to move up to seventh, but he was handed a drive through for exceeding track limits when overtaking a car at turn 2 on lap 1. Furious, he served his penalty during the safety car period and thus had to do it all over again once the action resumed. With Nasr out of contention, Palmer had one hand on the crown.

At the re-start, Palmer in seventh stayed out of trouble before slicing his way up to third behind Vandoorne and Artem Markelov, both of which still had to pit. Further down, Evans was in fighting spirits: the Kiwi caught up with Palmer, passing Tio Ellinas and Stéphane Richelmi on the way and being helped by a slower Markelov ahead of Palmer. When the race leaders pitted, Palmer was handed the win, but Evans would not let him have it easy, both men swapping fastest laptimes, but true to his season’s form the Briton drove flawlessly to the chequered flag becoming the tenth GP2 Champion.
Behind the leading pair, Marciello battled with Pic for third place. Vandoorne salvaged his race result by taking fifth place ahead of André Negrao, Sergio Canamasas and Julian Leal who will start from reverse pole tomorrow. Marco Sorense and Nathanaël Berthon completed the top ten.