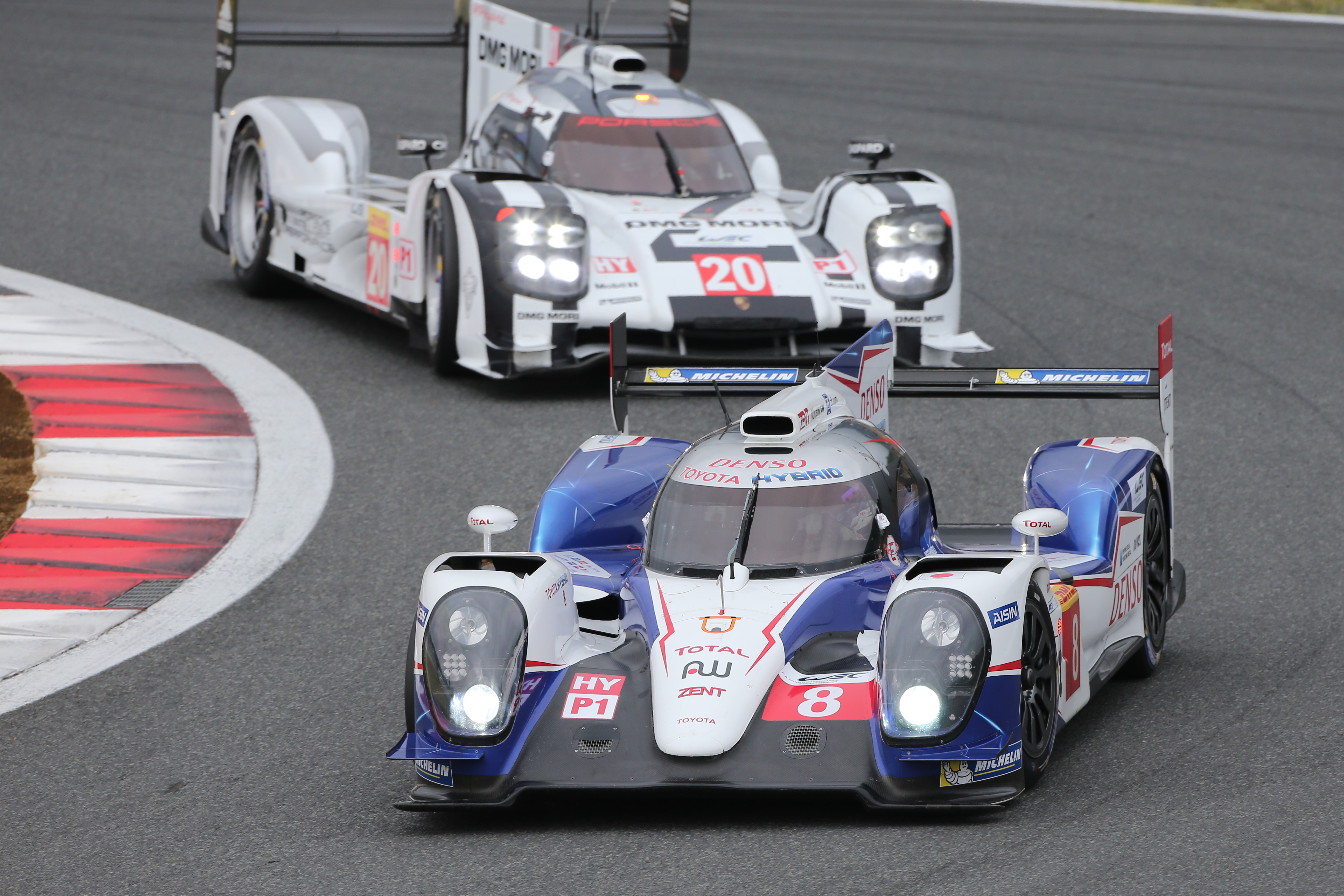 TOYOTA Racing maintained its unbeaten record on home ground with a dominant one-two victory in the Six Hours of Fuji, the fifth round of the FIA World Endurance Championship. The team scored a third consecutive win in the event thanks to the #8 TS040 HYBRID of Anthony Davidson and Sébastien Buemi, who extend their lead in the drivers’ World Championship. A perfect day for the team saw the #7, winner in Fuji for the past two seasons, finish close behind in second, with Alex Wurz, Stéphane Sarrazin and Kazuki Nakajima at the wheel. Both cars finished one lap ahead of the opposition as TOYOTA regained the lead of the manufacturers’ World Championship. Its third win of the season puts the team eight points clear of Audi.

In the drivers’ standings, Anthony and Sébastien lead by 26 points over team-mate Nicolas Lapierre, who missed the Fuji race for personal reasons, with the third-placed crew of Audi #2 now trailing by 29 points.

Unlike last year, when heavy rain ruined the race, today’s event started in dry but cool weather, with air temperature just 14°C. But the action on track soon got hotter. Starting from pole, Sébastien in the #8 initially slipped to third in the first corners before hitting back and, helped by the 1,000PS four-wheel-drive TOYOTA HYBRID System – Racing, retaking the lead within the opening lap. Kazuki was also involved in the battle and ultimately gained a position to move into third. Following an early pit stop for Porsche #20, the #7 took second and the two TS040 HYBRIDs ran together at the front, stretching their lead. At the first pit stops, just before the hour mark, Stéphane took over the #7 while Anthony got in the #8, with both using their new tyres to pull clear of the chasing pack.
After a clean double stint, during which they had to fight through plenty of traffic, the pair was separated by just three seconds and had pulled out a gap of almost a lap on third place. Sébastien returned to the cockpit of the #8 just before half distance while Alex took the wheel of the #7 to continue the TS040 HYBRID dominance.

With a one-lap advantage, the team and drivers adopted a cautious approach to tyre strategy and traffic with the target of ensuring maximum points from the weekend. Anthony and Kazuki returned for further stints, with Stéphane taking over the #7 in the last hour as Anthony remained in the cockpit to take the chequered flag and a very popular one-two in front of 51,000 Japanese fans over the weekend.
Racing resumes for WEC next month with a hectic climax to the year, starting on 2 November with the Six Hours of Shanghai prior to the season-closing races in Bahrain and Sao Paulo.
Yoshiaki Kinoshita, Team President: “I am very proud of the team and drivers for this one-two finish in our home race. We have had some great days here at Fuji but this was even better than our previous victories. Many people have asked me if we feel extra pressure this weekend, as Fuji is our home race; actually we only feel extra support.  So I would like to say a big thank you to all the fans, Fuji Speedway and our colleagues from TOYOTA who gave us such great encouragement all weekend. Our car was the most competitive this weekend and this is what we are pushing to achieve for the final three races of the season.”

TS040 HYBRID #7 (Alex Wurz, Stéphane Sarrazin, Kazuki Nakajima)
Race: 2nd, 236 laps, 6 pit stops. Fastest lap: 1min 27.887secs
Alex Wurz: “It’s amazing to bring home a one-two in dominant form; we didn’t expect that. The track was very tricky but we did our homework well in terms of tyre choice and set-up. This gave us the chance today to get this result. A one-two like this makes everyone happy; the fans, our colleagues at TOYOTA and especially the team. Now we go to China full of confidence.”
Stéphane Sarrazin: “This is a brilliant result for TOYOTA and the whole team; it’s just amazing. The team did a great job and a one-two is the best possible result. Both cars were pushing each other and it was very close. I am really happy to be back on the podium. Our target coming here to Fuji was to take the lead in the manufacturers’ World Championship and we have achieved that. After frustration in Le Mans and Austin this is a big result for us. Now for the next one.”
Kazuki Nakajima: “Congratulations to the #8 crew. They did a very good job and together we have achieved a great result for the team which is fantastic for the manufacturers’ World Championship. It’s nice to show what we can do in front of our home supporters. My race went well, although it was actually my first race start in WEC and this was quite tricky, especially with the different fuel strategies. I got through the pack and our pace was strong. It’s been a very good day.”

TS040 HYBRID #8 (Anthony Davidson, Sébastien Buemi)
Race: 1st, 236 laps, 6 pit stops. Fastest lap: 1min 27.815secs
Anthony Davidson: “It was an absolutely perfect race and a perfect weekend for everyone at TOYOTA Racing. That was a great job by all the team; we had the strongest car, the right strategy and great pit stops. First and second in our home race; it doesn’t get better than that. For the team to win here three times in a row now is pretty special. It extends our lead in the drivers’ World Championship and regains the lead in the manufacturers’, so you couldn’t ask for any more as a team. So big thanks to all and especially to the guys from TOYOTA Motor Corporation who have given us such great support this week.”
Sébastien Buemi: “To leave Fuji with a one-two and the lead of both World Championships is a very special feeling. At the start it was clearly a bit difficult to warm up the tyres so I was in the middle of a big fight; the first lap was quite crazy. After that we took control. It was a great job from Anthony and the whole team. Honestly, we didn’t expect to be so far ahead but it is the result of a lot of hard work. We’ll enjoy this moment but quickly focus on the remaining races. Today’s result is a good sign for the rest of the season.”