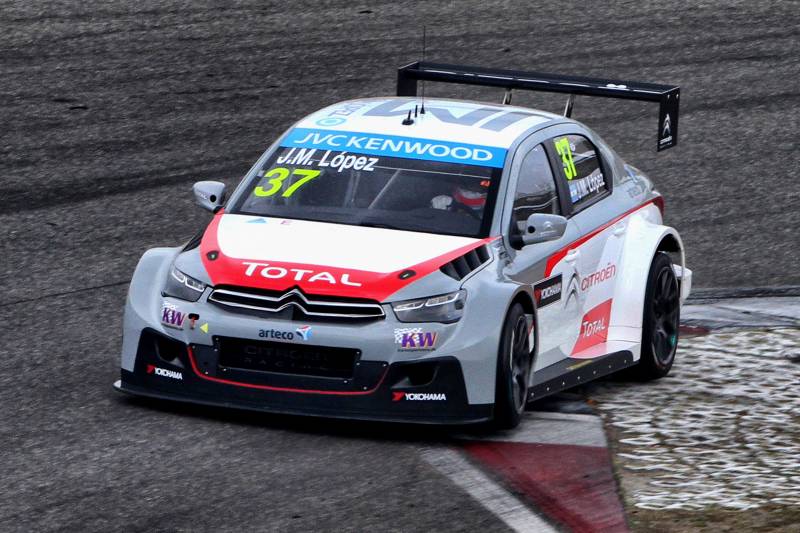 After taking four of the front five positions in qualifying, Citroën Total had already made a very strong impression at the Shanghai International Circuit. Race one got underway in front of packed stands, the fans all cheering on local hero Ma Qing Hua, who started on the front row. When the lights went out, José María López leapt into the lead ahead of his Chinese team-mate and Yvan Muller. Fifth on the grid, Sébastien Loeb mistimed his started and ended the first lap down in seventh place. Ma Qing Hua, who has looked sharp, badgered Pechito López on his home track, putting him under pressure. Despite locking up his brakes a few times, the leader remained in front but was unable to open up any sort of lead.

Meanwhile, Sébastien Loeb began to make a spectacular comeback. First Tiago Monteiro, then Gabriele Tarquini and finally Norbert Michelisz were all unable to withstand the pressure applied by the former rally driver. Just before the halfway stage, Citroën were therefore on course to record a one-two-three-four!

The four Citroën C-Elysées regrouped just before the chequered flag, capturing a historic moment for the Brand. José María López, Ma Qing Hua, Yvan Muller and Sébastien Loeb thus secured the title of Manufacturers’ World Champion for their team. The time for celebrations was limited, however, as the race two started just a few minutes later. Thanks to the inverted grid, Sébastien Loeb was the best placed Citroën driver, starting from the third row. In the first few corners, Yvan Muller closed on his team-mate. Loeb then tried to overtake Hugo Valente, but Muller took advantage to get past!

As he attempted to regain the place lost, Sébastien Loeb accidentally hit Yvan, who was forced to retire with a broken rear wheel. As usual, José María López moved quickly and smoothly through the field, managing to climb up to P3! He crossed the finishing line in third place, scoring precious points for the Drivers’ World Championship. Sébastien Loeb finished fourth but was handed a 30-second penalty after he was adjudged to have caused the collision with Muller, meaning he dropped out the top 10. Ma Qing Hua finished fifth, after a good fight with Norbert Michelisz and Tom Coronel.

Yves Matton, Citroën Racing Team Principal: “The season isn’t quite over yet, but I think we can safely say it has been a great year. A year that began, in fact, eighteen months ago, when we started working on this project. Whether it was in the technical centre in Versailles or on the ground, the entire team spent a lot energy making sure we were ready for the start of the championship. With a well-deigned car and a set of fantastic drivers, we have obtained some truly exceptional results. I would especially like to thank Yvan Muller, for his involvement with us. It was very emotional to record a 1-2-3-4 in China, and to see Ma Qing Hua finish on the podium.”

José María López: “This was a very important weekend for me and I must say I was more nervous than usual. It’s fantastic to secure the Manufacturers’ title with Citroën Racing. I want to congratulate and thank them all. I believe more than ever that motor racing is a team sport, even if the drivers tend to get most of the glory. It wasn’t easy to win this seventh race, because Ma Qing Hua was always behind me, pushing. That just goes to show that his win in Moscow wasn‘t down to luck!”

Ma Qing Hua: “First of all, I’d like to say thank you and well done to Citroën Total. Like this weekend, the team has had a very successful season. The guys have done everything they could to make up for my lack of track time and it’s motivating to feel so supported. Finishing second in race 1, so close to the winner, was a good result. I think that it’s worth even more than my win in Moscow.”

Yvan Muller: “Personally speaking, it hasn’t been my best weekend. Nor has it been my best season! But I’m pleased with the team result. We began working together fifteen months ago and it’s a great achievement to win the title. I’m pleased for the mechanics, the engineers and everybody involved.”

Sébastien Loeb: “The first race was exciting. I mistimed my start, but I managed to fight with the others and get past them to climb back up to fourth place. I think we’ll all remember this one-two-three-four finish as a great moment! In the second race, I was little bit too optimistic on braking and I accidentally ran into Yvan. I’m really sorry for him and it’s fair enough that I was given a penalty for that. But the big story of the day is the title for the team!”