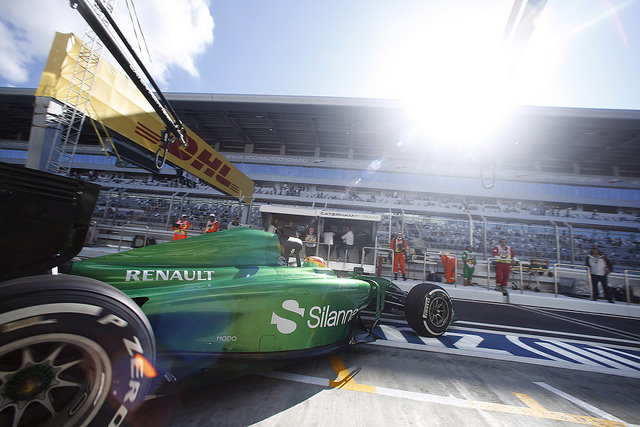 Caterham’s financial troubles appear to be deepening, as it emerges the struggling F1 team may have no cars to race at the forthcoming US grand prix. Reuters reports that the green cars are scheduled to leave Caterham’s Leafield factory bound for Austin this weekend. But the man appointed to oversee the administration of Caterham Sports Limited, reportedly a separate company to the F1 team but also based at Leafield, is warning he will not be releasing the cars amid a legal dispute.

It is the latest instalment in Caterham’s financial troubles following the sale of the struggling team by founder Tony Fernandes to a mysterious consortium represented by advisor Colin Kolles, of HRT and Spyker fame. “My legal advice is that I own the cars and won’t be allowing the cars out of the factory until I reach an acceptable agreement,” said Finbarr O’Connell, working for the administrators on behalf of unpaid creditors including Exim Bank of Malaysia.

The team, said to now be in talks with the administrator, insists the troubled Caterham-branded company is not associated with the team, while sources say Caterham’s F1 future is therefore not endangered. But O’Connell hinted that the next step could be the team’s expulsion from the Leafield factory, which is already being guarded by private security on behalf of the administrator. “We are allowing 1MRT (the team) to use our facility while we negotiate a settlement,” he said. “They need to reach an agreement with us.”

Since the date of the Agreement, the Seller has refused to comply with its legal obligations to transfer their shares to the Buyer. The Buyer has been left in the invidious position of funding the team without having legal title to the team it had bought.  This is in total contradiction to the Seller’s press release of 3 October 2014 which stated that Mr Fernandes and his Caterham Group had no longer any connection with the Caterham F1 Team.

After three months of operating the Caterham F1 Team in good faith, the Buyer is now forced to explore all its options including the withdrawal of its management team. Lawyers have been instructed by the Buyer to bring all necessary claims against all parties, including Mr Fernandes who, as an owner, will run the F1 operation.