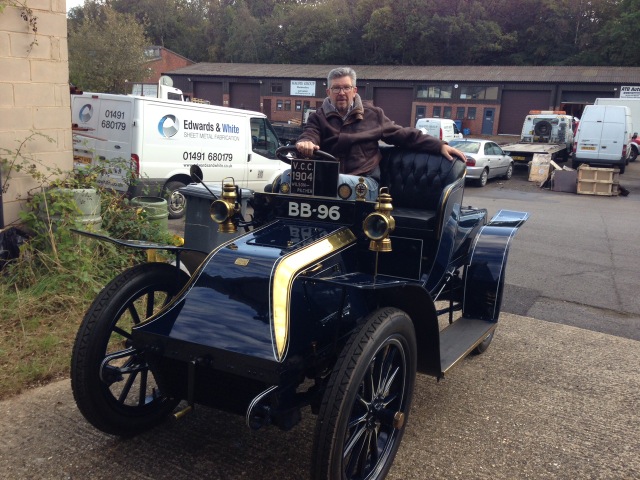 Motor racing star Ross Brawn OBE, has swapped the high-octane world of Formula 1 for a rather more leisurely form of transport. Brawn, architect of countless F1 and sportscar world titles for Michael Schumacher, Jenson Button, Ferrari, Benetton, Jaguar and his own Brawn GB team, is taking part in his first London to Brighton Veteran Car Run. He will be driving his own veteran car and it will, he says, be “…a real challenge.”

Brawn, who is taking a sabbatical from Formula 1 after leaving the Mercedes Grand Prix team earlier this year, owns the only known surviving British-built Wilson Pilcher. Manufactured in 1904, it was created by engineer Walter Gordon Wilson who went on to invent the army tank: for years the Wilson Pitcher car was displayed at the British Tank Museum. Until Brawn entered the story, the car is believed to have spent its entire life owned by the Wilson family. “I know the family and knew about the car. But quite by chance I saw it in an auction catalogue last year and made some enquiries… and I was told that it might leave the country as an American collector was interested. So I went into battle,” said Brawn.

After the sale the car was entrusted to veteran car expert Nigel Parrott to be recommissioned for its forthcoming trip to Brighton.

“It was a very advanced car for its day,” admitted Brawn. “It has a 2.7-litre horizontally opposed four-cylinder engine which is suspended in a cradle in the chassis. It also has a sophisticated semi-automatic gearbox which, I believe, was a forerunner of the famous Wilson Pre-Selector ‘box. But compared to a modern car the suspension is crude and the braking takes anticipation, shall we say. With absolutely no previous experience of a veteran, I have been taking driving lessons from Nigel so there’s no denying the London to Brighton will be a challenge. But challenging yourself is what life’s all about.”

Brawn won’t be phased by the weather, however, even if it’s pouring down. “I love fishing and there’s a saying that there’s no such thing as bad weather just bad clothes. My wife and I will be well wrapped up against the elements.”

The Wilson Pilcher joins a number of other cars in Brawn’s private collection and after the Run will rub shoulders with a few Jaguars, including a very early E-type, and some significant Ferraris including the 250 SWB used by Stirling Moss to win the 1962 Tourist Trophy. Brawn also owns the Brawn GP that took Button to his title in 2009. But while the Wilson Pilcher won’t be the fastest car in the collection it will be one of the rarest and, arguably, one of the most important, too.

The Bonhams London to Brighton Veteran Car Run celebrates the original Emancipation Run, held on 14 November 1896, and which marked the Locomotives on the Highway Act. This landmark Act raised the speed limit for ‘light locomotives’ from 4 to 14mph and abolished the need for a man walking ahead of the cars waving a red flag. The Run is the highlight of a long weekend of motoring nostalgia in the capital, much it of it free to view. Other events include the popular free Regent Street Motor Show (Saturday, 1 November) and the annual Bonhams Veteran Car auction (Friday 31 October).