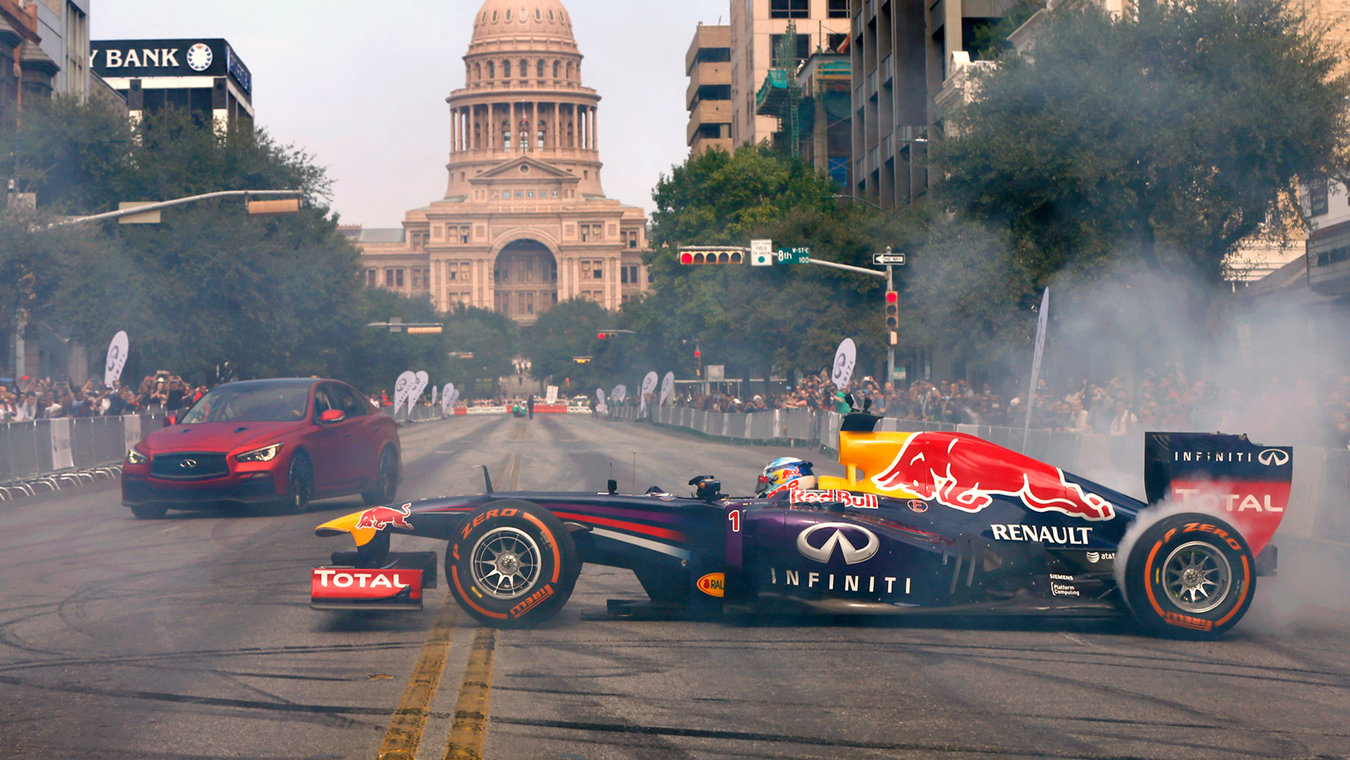 Infiniti kicked off the United States Grand Prix weekend with a Downtown spectacular in the centre of Austin. The Texan capital reverberated with the roar of the 750hp RS27 V8 as the Infiniti Red Bull Racing Live Demo team unleashed the double

championship-winning RB7 on the city streets, while our drivers took some lucky guests out on the hottest of hot laps in the prototype 560hp Infiniti Q50 Eau Rouge.

The programme started with an Infiniti press conference before the drivers headed to Congress Avenue to be welcomed by the Mayor of Austin at (high) noon. DJ Erok handled the decks while Seb fired up first, taking NBC F1 presenter Will Buxton for a run in the Q50ER. Meanwhile Dan buckled into the RB7 and our friends from Renault had the car do its party piece, playing that famous tune: ‘Star Spangled Banner for Exhaust Manifold.’ After his first run, complete with the customary donuts and burnouts (and extra donuts, this being America), Dan got up on the stage for an interview, compared by David Coulthard and Texas-based sports broadcaster Robbie Floyd.

After another set of runs around the impromptu street circuit in the Q50ER and RB7, the pair swapped seats to repeat the process. With media hot laps completed, the drivers took out competition winners and a selection of lucky spectators from the huge crowd. They gave the Q50ER the sort of shakedown that you don’t usually see on a public street.

“It’s always exciting to interact with fans and see their excitement for Formula One, especially in the United States where the sport is still growing,” said a grinning Daniel, as his last set of victims guests staggered happily away from the car.

The event ended at 2pm with Seb signing off from the RB7 with the biggest donuts of a big-donut day. After that the drivers jumped into Infiniti Q60 Convertibles, went for one last burn around the streets, and then (figuratively) headed off into the sunset. The real action begins at the Circuit of the Americas on Friday – but this was a lovely way to kick the weekend into gear.

“We’ve had a fun day on the streets of Austin – it’s a really cool location,” concluded Daniel. “I think it’s good to get the city involved early in the week. It’s our third year here now and you can see how Austin has really started to embrace F1. People are understanding our sport more, we’re seeing lots more fans in team kit and that’s really nice. There’s been lots of people here today, the atmosphere’s been really good – and now I can’t wait to get out on track.”