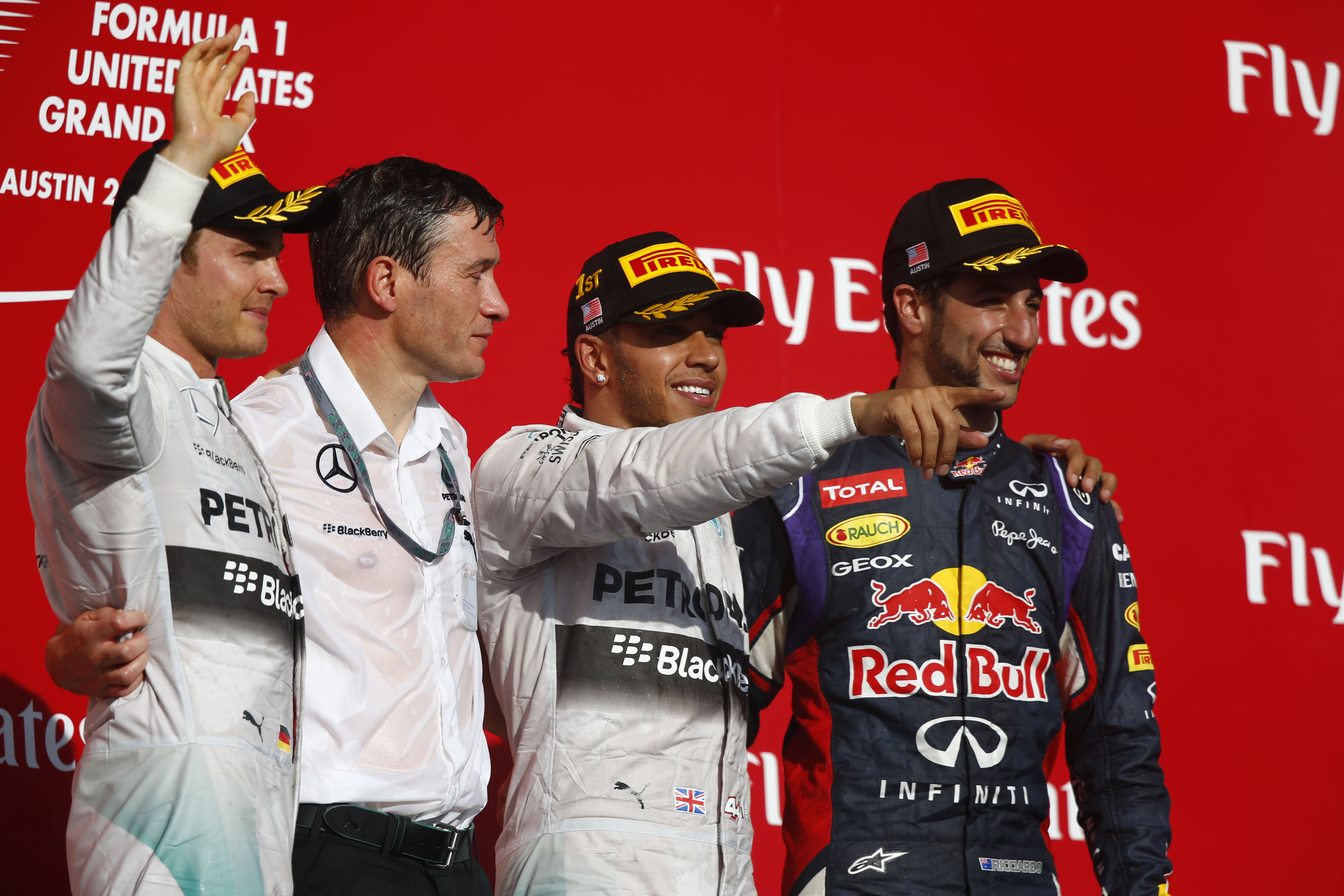 Mercedes driver Lewis Hamilton used a two-stop strategy to seal victory from second place on the grid at the United States Grand Prix and ensure that only he or his team mate Nico Rosberg will win the 2014 drivers’ title. Hamilton’s 32nd victory means that he is now fifth on the list of all-time winners, equalling Fernando Alonso, and has the highest number of Formula One wins of any British driver.

Hamilton started on the soft tyre and then completed two stints on the medium tyre to win the race by four seconds: a strategy that was echoed by his team mate. All the drivers apart from Nico Hulkenberg (Force India), Daniil Kvyat (Toro Rosso) and Sebastian Vettel (Red Bull) started on the soft tyre, with Vettel in particular hoping that a diverse strategy would help him make progress following a pit lane start.

Both Williams drivers used a different two-stop strategy to the cars in front of them, completing two opening stints on the soft tyre to maximise their speed early in the race and a final stint on the medium. Red Bull’s Daniel Ricciardo also made the most of the opportunities available by stopping earlier than his direct rivals (a manoeuvre known as ‘the undercut’) and pushing hard during his in and out laps to claim his eighth podium in Formula One. The Ferrari of Alonso had a different school of thought: the only top-10 finisher going for a soft-medium-soft strategy.

A safety car on the opening lap prompted a number of drivers to come into the pits, changing their strategies, including both McLarens. The most interesting tactic was from Vettel, who did only one lap on the soft tyres under the safety car – potentially allowing him to run all the way to the end of the 56-lap race without stopping again. In the end he stopped four times in total, eventually ending up in a points scoring seventh place.

Pirelli’s motorsport director Paul Hembery said: “We’ve seen some very close racing all the way from the front to the back of the grid, putting on a great show for the crowd here in the United States. That’s been helped by the tyre choice, which has been exactly right in terms of degradation and grip, allowing a wide range of strategies and plenty of entertainment from the start all the way to the very end. Tyre performance obviously changed compared to yesterday because of the warmer temperatures, which led to some quick calls on the pit wall. Lewis Hamilton was able to use his tyres perfectly to gain an advantage when it mattered most over a very strong team mate. Congratulations to Mercedes for winning the drivers’ championship – now we just have to wait and see with which driver!”

We predicted three stops as theoretically the fastest strategy for the 53-lap race, but we also said that two stops were the most likely option, because of traffic. The fastest theoretical strategy was: start on soft, change to soft on lap 12, soft again on lap 25 and then medium on lap 38. The fastest two-stop strategy was expected to be start on soft, change to medium on lap 14 and then medium again on lap 35. Hamilton pitted for mediums on lap 16 and lap 33: very close to our second prediction (although the length of the first stint was affected by the safety car).