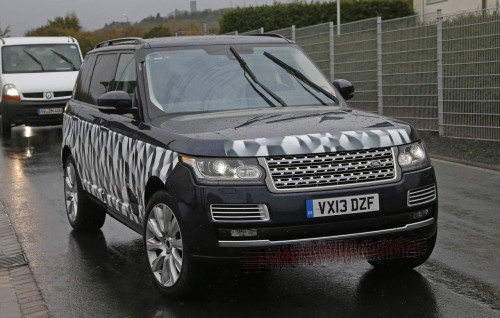 Land Rover has been the top of its market for a long time now in Luxury SUV’s and no one has been able to easily compete with it. They have kept producing new versions so that other manufacturers are not able to get a decent stake in that part of the market. Even other luxury British companies such as Bentley and Jaguar are unable to knock it off and it seems that it may even be trying to help  its sister company; Jaguar, by producing a crossover although it will not be helping out Bentley by the look of it.

A new vehicle in disguise has been spotted in testing at the Nurburgring. It looks like it has the same long wheelbase as last years Range Rover had but there are four tail pipes coming out from under the bumper. This implies that it will be a powerful model than the original long-wheelbase car. The fact that it has these and has been seen testing implies that there is certainly something on the cards for Range Rover.

It is thought that it could be an SVR version of the Range Rover L which is likely to have the same V8 engine as the F-Type R, XFR-S and XJR as well as the Range Rover Sport SVR. It is expected that the 5.0 litre engine will be capable of around 550-horsepower although it would be possible to get it up to 575 for a Roadster version.

It is expected that this engine will be paired up with upgraded brakes, a sportier look and enhanced aerodynamics as well. This would therefore compete well with the Bentley SUV which has a 200 mph top end speed.