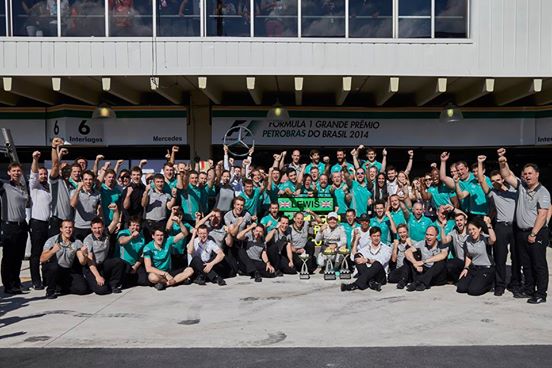 Nico Rosberg took victory at the Brazilian Grand Prix after a race-long battle with team-mate Lewis Hamilton, who completed a record-breaking one-two finish for the Silver Arrows at Interlagos.

Nico Rosberg
That was a fantastic weekend and I felt very comfortable over the whole three days. I had to learn from Austin, which was a big disappointment, and I think I achieved that. I was able to control the pace a bit better and didn’t let Lewis come too close. He drove really well and was always right there pushing me. When he spun I had a bit of time to relax and was able to save some life in the tyres for the end of the stint. That worked out perfectly and it was a great day with another one-two for the team. I was also happy for Felipe to be on the podium with us at his home race. The Brazilian people have been so great to us throughout this the whole weekend so it was also a good day for them. Now we have a great finale to look forward to in Abu Dhabi. I’m still believing 100 per cent that I can make it but, of course, I will need some help from Felipe or Valtteri or Lewis himself.

Lewis Hamilton
Naturally, you’ll always be disappointed when you make a mistake and I did that today. But honestly, I felt great out there. The car was strong, my

pace was good, I didn’t give up, kept pushing and made up the time so that’s what’s most important to me. Generally, when I’m told to push it means the team is bringing me in that lap so that’s what I did. In the end, they left me out for another lap which caught me by surprise. By the time I came round to do the second lap my rear tyres were gone from where I’d been pushing so hard. Even so, it was my mistake locking up the rears and ultimately that cost me the win. Nico drove a great race – defending well and not making any mistakes. But it’s clear I had the pace. It’s not a big deal, though. That’s motor racing. Obviously, I lost some points which is disappointing. But it’s a great team result with a record-breaking one-two finish and I really enjoyed the race. The car is just fantastic – the best I’ve ever driven – so a big thank you to the team for all their hard work. I’ll be pushing just as hard in Abu Dhabi and hopefully we’ll get to have another great race like we saw today.

Toto Wolff
I’m so proud of the team and what we have achieved today. What you see at the track on a race weekend is just the tip of the iceberg and there are so many hard workin

g, intelligent, good people who contributed to the success of the car and of this season. If I could, I would want to mention the names of everybody. Although you see a couple of public faces, the results are only possible because the team is strong and sticks together. Numbers like 11 one-two finishes, 15 wins and 30 podiums in a season make me incredibly proud of my colleagues and humble at what we have achieved together. Today’s race was a pure battle between Nico and Lewis, with no quarter asked or given. The deciding moment probably came when Lewis spun on lap 28. That gave Nico some breathing room and, although Lewis seemed to have the better speed today, Nico was able to absorb the pressure from then all the way to the flag. It was a fantastic performance from both of them and sets up the prospect of a thrilling finale in Abu Dhabi. No matter which way that race goes, either driver would be a very worthy World Champion at the end of a fantastic season.