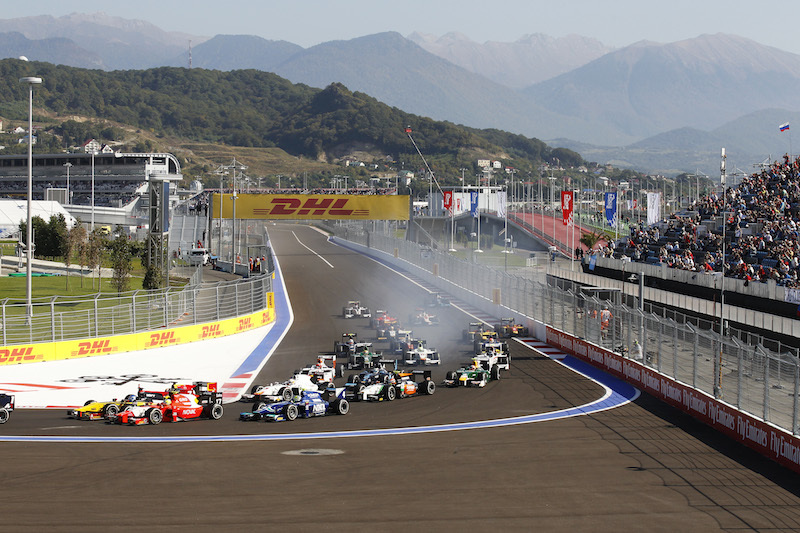 Abu Dhabi forms a spectacular backdrop to the finale of both the GP2 and GP3 Series, equipped by Pirelli, as a stepping-stone to Formula One. While the GP2 Series was wrapped up by DAMS driver Jolyon Palmer in Russia, the GP3 Series is yet to reach its conclusion, with Carlin’s Alex Lynn leading the championship.

At the smooth Abu Dhabi circuit, characterised by warm weather, fast straights and 90-degree corners, the GP2 drivers will have the medium and supersoft tyres at their disposal, with a significant performance gap expected between the two compounds. The GP3 drivers will use the soft compound only. Unlike Formula One, where the race starts in the late afternoon and ends in the evening, GP2 and GP3 will race at various times during the weekend. The GP2 race on Saturday takes place in the evening, while Sunday’s race is in the heat of the day. Both GP3 races take place during the day.

With practice scheduled for the morning, teams in both series will have to cope with a wide variety of track and ambient temperatures. As a result, conditions in practice and qualifying will not necessarily be representative of what drivers are likely to find in the race – making the strategy very hard to calculate.

Pirelli’s racing manager Mario Isola: “The varying conditions are likely to be the biggest challenge for the GP2 and GP3 drivers at Abu Dhabi, and this means that drivers have to adapt their driving style to extract the maximum performance from the package. As the championship is decided in GP2, we can look forward to a straight fight for victory, with nothing else at stake apart from race wins. In GP3, the title is yet to be completely settled, so how the protagonists decide to manage their tyres will

be crucial to the race. Track evolution affects the support championships even more than Formula One, as they are first onto the track. In GP2, the big challenge as ever will consist in getting the most out of the softer compound in qualifying, despite not having driven on it extensively beforehand due to the limited allocation available. There is likely to be quite a significant gap between the medium and supersoft compounds, meaning that the teams are likely to use the supersoft almost like a qualifying tyre, although of course both compounds must be used during Saturday’s race. With both GP2 and GP3 drawing to a close, we’re delighted to take part in a number of promotional activities in Abu Dhabi that showcase both series, such as the GP2 pit stop challenge on Thursday, and of course the Pirelli scholarship cheque that we will hand out to the highest placed GP3 driver at the official prize-giving on Sunday.”

The challenge for the tyres:

With a number of 90-degree corners leading onto straights, traction is one of the most crucial aspects of Abu Dhabi. While the surface is only mildly abrasive, drivers must take extra care to avoid wheelspin, which takes life out of the rear tyres.

After the races, there will be a GP2 and GP3 test from Thursday to Saturday next week.

The set-up used for Abu Dhabi tends to be medium downforce in order not to compromise top speed on the straights. This places the emphasis on mechanical grip from the tyres through the 21 corners.