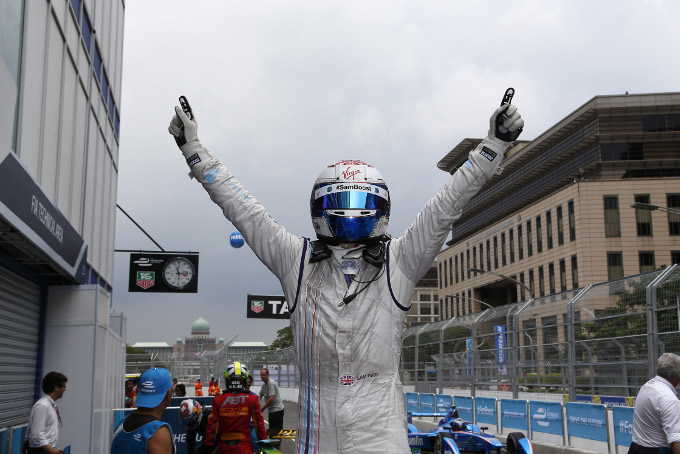 Bird dedicated his win to former GP2 team-mate Jules Bianchi, who was severely injured in the Japanese Grand Prix: “I have to dedicate this win to a good friend of mine who is very ill. It’s very sad what’s happened to him and this one is for Jules. The weekend went really well, we were quick from the first outing and we were quickest in practice. Qualifying didn’t quite go our way as I think we were not in the best group for doing a fast lap time but we put that right in the race. The first stint I was able to get a very good gap which meant we could take it easy and not make any silly mistakes, do some lift and coasting, and coast to the finish.”

Audi Sport ABT driver Lucas di Grassi and e.dams-Renault’s Sebastien Buemi both managed to fight their way through the field to stand on the podium despite starting at the back of the grid.

Di Grassi, who started 18th, said: “For sure this was beyond my expectations. Everyone is here to win, everyone is pushing to the limit as this track has proven once and for all this car is very tricky to drive even if you have done all the testing. The tiniest margin can ruin your whole weekend and that’s what happened in qualifying from my side and then to come all the way from the back of the grid on a street track to second is an amazing feeling. I felt I had a much better race than in Beijing where I won.”

“I’m really happy I have to say,” said Buemi, who lined up 20th. “We were really good in testing and then when we came to the first race it just didn’t go well. It went bad today in the qualifying which is quite strange, we did some set-up changes that didn’t work so well but I felt the strongest in this car and finished third.”

Bird’s win means he moves up to second place in the championship standings just three points behind Beijing race-winner di Grassi. Nicolas Prost continued the strong form he showed in qualifying to finish fourth. The Frenchman started from 11th position after carrying over a 10-place grid penalty for causing an avoidable collision in Beijing. Oriol Servia, who inherited pole position, made a good getaway to retain the lead at the start but was soon overtaken by Bird, who pulled off a well-judged move before streaking away to victory. Dragon Racing’s Jerome d’Ambrosio showed his reliance rising from the back row of the grid to come home in fifth. D’Ambrosio qualified in the top-three only to be penalised for exceeding the maximum power usage.

There were mixed fortunes for the FanBoost winners. Amlin Aguri’s Katherine Legge was involved in a first-lap tussle with Michela Cerruti that effectively ended her hopes. Venturi’s Nick Heidfeld crashed out of the race while battling with Andretti’s Franck Montagny.

Bruno Senna used one of his FanBoosts to overtake e.dams-Renault’s Nico Prost for fourth, but the Mahindra Racing driver lost out on the final lap as he was preparing to overtake Buemi for third and hit the wall. Senna said: “I saw Buemi and had an opportunity to get a podium but I made a mistake. I just went for it and got out on the marbles when I lost the car.”

Overall the feeling was that the local promoter has done an excellent job with creating a brand new street circuit. “Well done to everyone who has helped this track happen,” said Bird. “It was extremely challenging and a great layout and made for some exciting racing.”