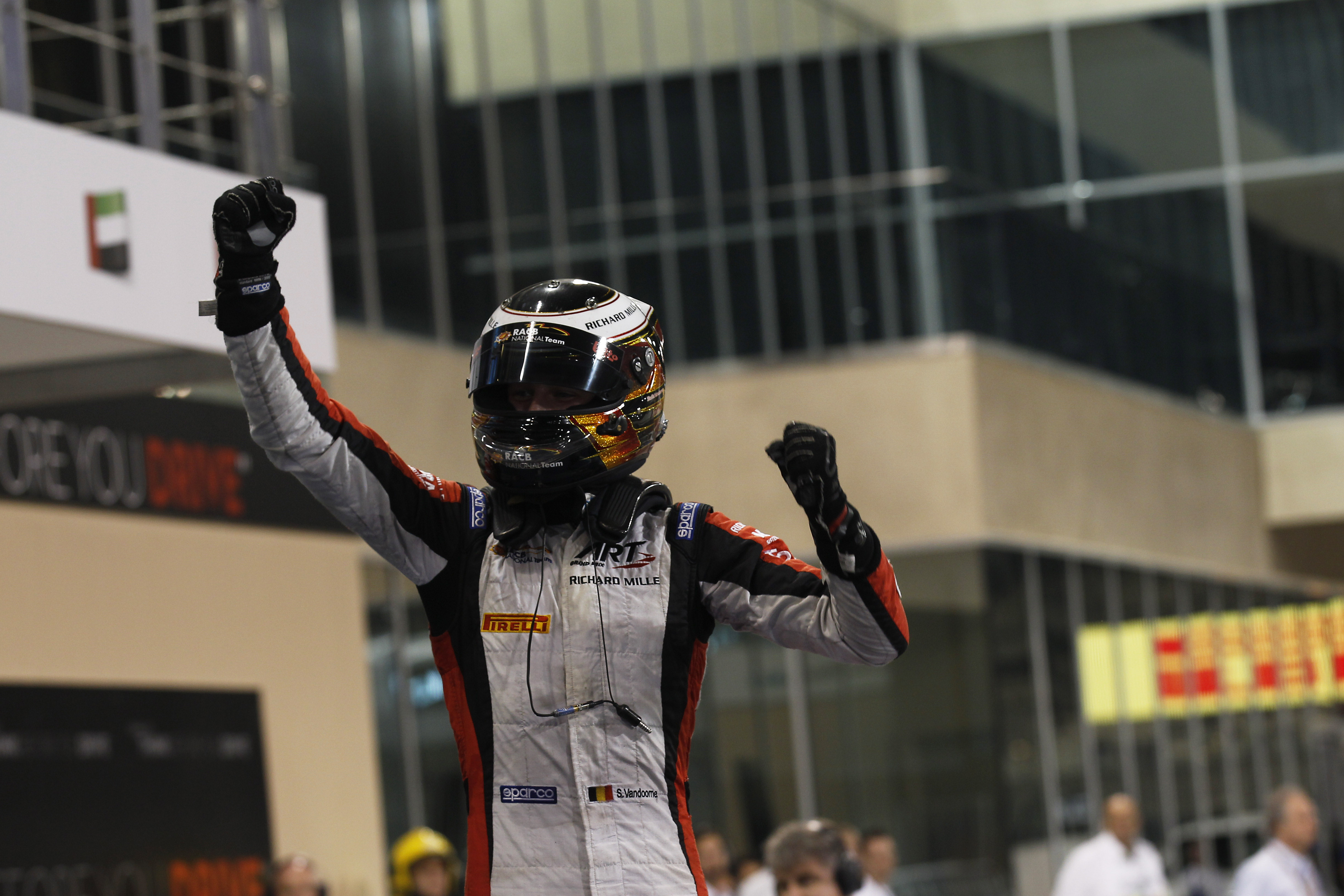 McLaren reserve driver Stoffel Vandoorne continued his weekend-long display of speed and guile with a crushing win in this evening’s feature race at Yas Marina, picking the right strategy and executing it to perfection for victory by 12 seconds over GP2 Series champion Jolyon Palmer and Mitch Evans. The Belgian’s start from pole was inch perfect, with fellow front row starter Palmer dropping back into the clutches of teammate Stéphane Richelmi and a fast starting Felipe Nasr, who split the pair into turn 1 with Evans following before also making short work of Palmer into the harbour complex, just before a tangle between Rene Binder, Jon Lancaster and Marco Sorensen prompted a 2 lap safety car period to clean up the mess.
Vandoorne and Nasr on super softs pulled away from the prime-shod Palmer and Evans at the restart, but the Briton was soon pushing hard on the Carlin driver’s tail, muscling inside and through into the harbour section just before Vandoorne and Nasr led a group of soft shod drivers into the pits on lap 6, with Richelmi and Arthur Pic heading the rest in next time by to complete the set. The fight was now on the clock: Palmer slowly pulled away from Evans, Johnny Cecotto and Stefano Coletti, but all eyes were on the gap back to Vandoorne as the first of the pitted drivers, who soon ate up the gap to the back of the prime-shod drivers and was up for the fight, overtaking at will to keep the gap to the lead around the 30 second mark.

But as the race ran on the gap started shrinking, and Palmer’s team needed to calculate the loss of time on track versus the expected life of the super softs, and eventually had to bring him in with 9 laps remaining, with Evans following him in: the Briton had a slower stop and nearly lost the place to the New Zealander, but back on track Palmer soon pulled away and was eating into the gap up to now race leader Vandoorne. The gap dropped for lap after lap, but it soon became clear that the tyres weren’t going to last: Palmer started losing time with 4 to go, allowing Vandoorne to clear off for his fourth win of the season, well ahead of Palmer and Evans. Behind them Nasr and Richelmi took advantage of being on the right strategy to push up to P4 and 5 in the closing laps, ahead of Cecotto and Coletti, who just held off Pic at the line for 7th, while Rio Haryanto and Daniel de Jong rounded out the points, the latter stealing P10 from Raffaele Marciello on the last lap.
Palmer’s second place sealed the teams’ championship for DAMS to sit alongside his drivers’ title, in which Vandoorne moves to second place ahead of Nasr, 221 points to 212 with just tomorrow’s sprint race remaining for the Brazilian to claim back his place.