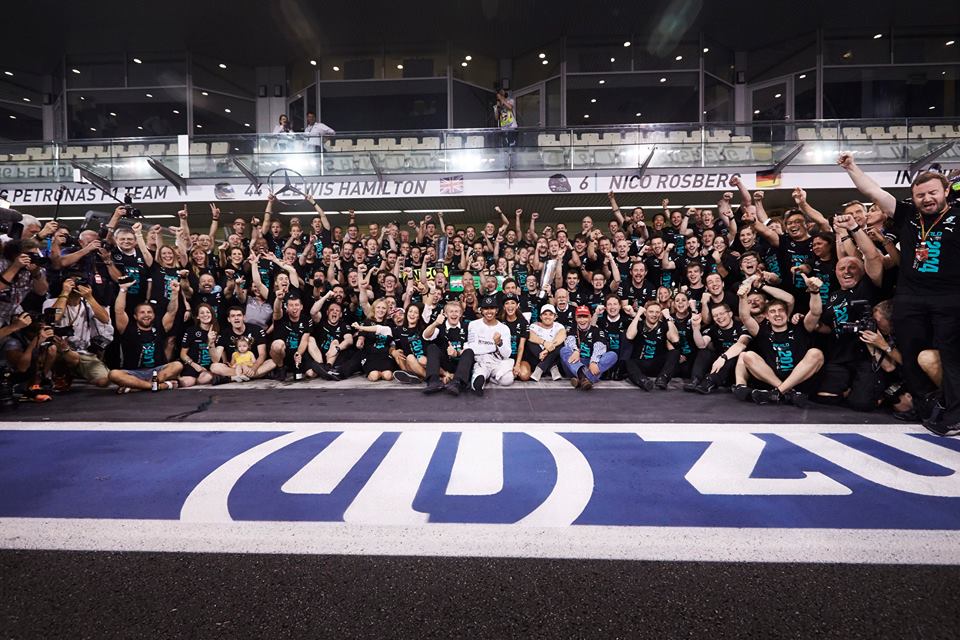 A triumphant end to the 2014 Formula 1 season for Mercedes-Benz as MERCEDES AMG PETRONAS driver Lewis Hamilton wins the concluding race of the campaign at the Yas Marina Circuit in Abu Dhabi to take the Formula 1 world championship title for the second time in his career. His team-mate Nico Rosberg ends the season as runner-up. Between them, Hamilton and Rosberg accumulated 16 wins, 18 pole positions, 12 fastest laps and 31 podium finishes. With eleven one-two wins in a single season, the team surpassed the previous record set by McLaren in 1988. The 16th victory of the season in the Abu Dhabi Grand Prix means that MERCEDES AMG PETRONAS no longer share the record with any other team for the highest number of wins in one season.

“Congratulations to the new Formula 1 world champion Lewis Hamilton,” said Dr Dieter Zetsche, Chairman of the Board of Management of Daimler AG and Head of Mercedes-Benz Cars. “He has truly earned that title with a fantastic performance this year. At the same time, I would also like to congratulate his team-mate Nico Rosberg and all of our staff in Brackley, Brixworth and Stuttgart on this fascinating and highly successful season. Formula 1 is a team sport, and they have all achieved a magnificent result from their joint efforts this year. The fact is that world champions drive Mercedes-Benz. Motorsport has a long tradition at Mercedes-Benz. The very first Mercedes in 1901 was a racing car. Ever since the invention of the first automobile by Karl Benz, our company has been a force for innovation in the automotive industry. Right from the start, Mercedes-Benz regarded racing as a proving ground for some of our most important developments. The new Formula 1 regulations on hybrid power units has taken the sport in the same direction that the automotive industry was already heading. Formula 1 is carrying out pioneering work in areas that will also be of great importance in the car industry of the future.”

Mercedes-Benz already clinched the F1 constructors’ championship in the Russian Grand Prix at Sochi. MERCEDES AMG PETRONAS became the first team to win the trophy in the new Formula 1 hybrid era. The knowledge gained from using this advanced technology has already proved of immense benefit in car manufacturing. A prime example is the latest series of hybrid and plug-in hybrid vehicles from Mercedes-Benz, namely the S500 PLUG-IN HYBRID.

“What a great season! Congratulations to the new Formula 1 drivers’ champion Lewis Hamilton and to the constructors’ champions MERCEDES AMG PETRONAS,” said Professor Dr Thomas Weber, Member of the Board of Management of Daimler AG responsible for Group Research and Mercedes Benz Cars Development. “The success of our Silver Arrows works team in developing the Mercedes-Benz W05 F1 Hybrid is not only restricted to the racetrack, however. Formula 1 serves as the fastest research laboratory in the world. Nowhere else are new technologies so systematically and rapidly developed as in the highest echelon of motorsport. This is where racing and series production derive mutual benefit. In

designing the world championship-winning F1 W05 Hybrid, the engineers in Brackley, Brixworth and Stuttgart made full use of existing synergies to ensure that the Silver Arrow would take the title in the first year of the new regulations. Conversely, Formula 1 itself comes up with new solutions that have general applicability. In this way, we have shown the world what is possible. The technology transfer between Formula 1 and series production is highly beneficial. In the past, technologies such as petrol direct injection have found their way into series production via the Silver Arrows of the 1950s. Today, the knowledge gained from Formula 1 can help with the similarly complex challenge of designing pioneering road vehicles such as the S 500 HYBRID PLUG IN. The objective is the same in both areas, namely the conversion of efficiency into superior performance.”

Winning both the drivers’ and the constructors’ world championships represents two special milestones for Mercedes-Benz in what was already a very special year. In 2014, the brand with the three-pointed star celebrates 120 years in motorsport and the 80th anniversary of the legendary Silver Arrows. In the 1954 and 1955 seasons, Juan Manuel Fangio in a Mercedes-Benz W 196 R won the drivers’ championship in the premier class of motor racing.

A giant TV screen was erected in the Mercedes-Benz Museum so that hundreds of Mercedes-Benz employees could watch the Abu Dhabi Grand Prix and cheer on the two Silver Arrows. The new Formula 1 world champion Lewis Hamilton and team-mate Nico Rosberg will be attending Stars & Cars on 29th November 2014, a special event in and around the Mercedes-Benz Museum in Stuttgart to mark the end of the sporting year. In addition to the Formula 1 champions and Mercedes-Benz DTM squad, the guest list for Stars & Cars will also include many other current and former celebrities from the motor racing world. Admission for the general public is free of charge.