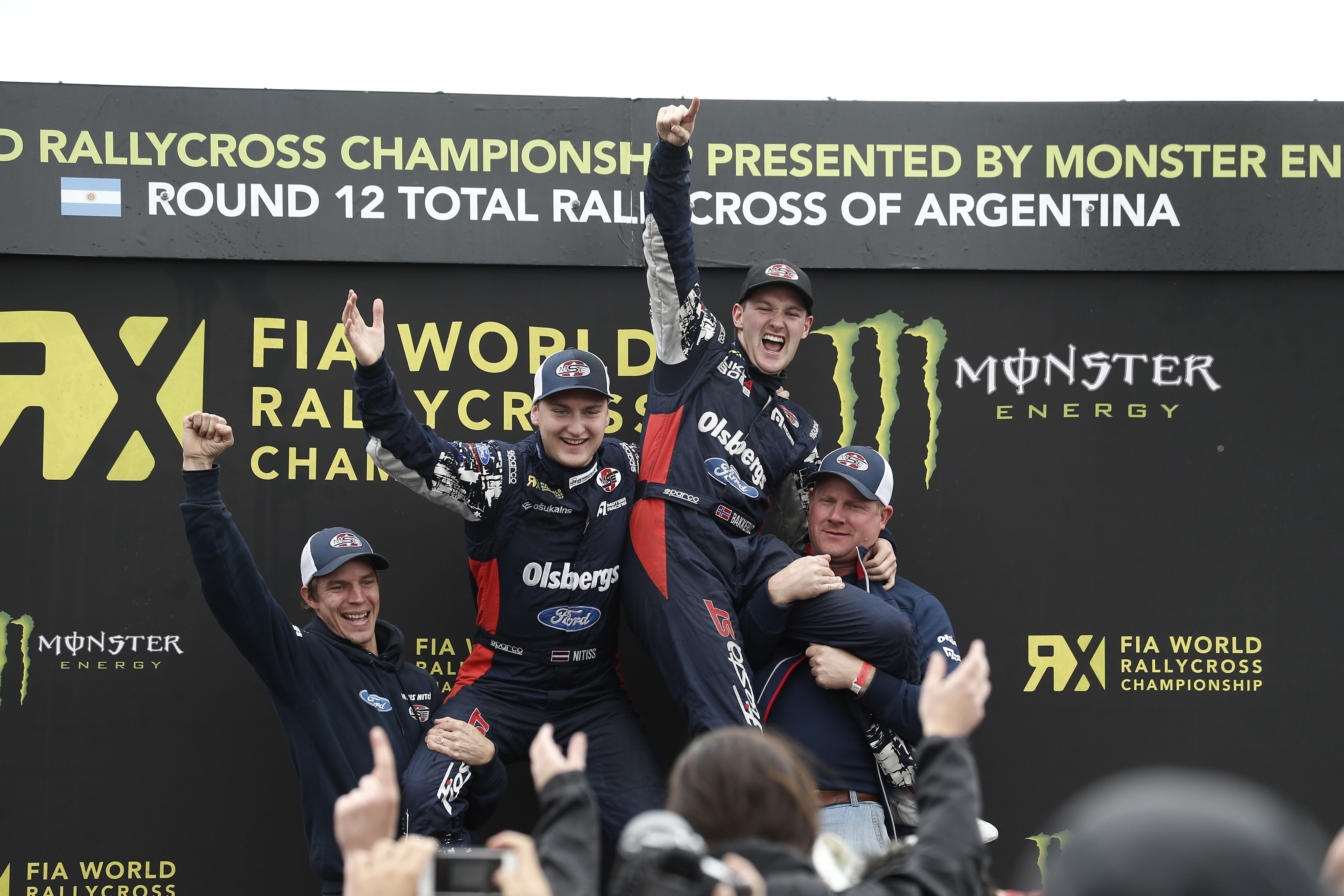 “This is a dream come true.  We started the season with a win in Portugal, and to finish with another win in Argentina feels really amazing,” grinned Solberg who was also awarded the Monster Energy Super Charge Award after his rapid start from pole position. “This Championship has so many talented drivers and I am extremely impressed with the high standard of driving we have had this year – especially from the younger guys. Now I’m looking forward to Doha for the FIA Awards Ceremony but I will be back and fighting for more seasons to come. I’d like to thank my whole team for working so hard throughout this year – there will be a big party tonight, that’s for sure!”

There was a three-way battle for the Teams’ Championship going into Argentina with Volkswagen Marklund Motorsport, Ford Olsbergs MSE and Team Peugeot-Hansen all still capable of winning the accolade. Peugeot-Hansen was knocked out of winning contention when Timmy Hansen and Timur Timerzyanov failed to score enough points at the Intermediate Classification stage. Tension mounted further when Topi Heikkinen’s engine failed in heat four and VW Marklund were forced to repair the Polo RX Supercar before the semis.

A fraught two semi-finals were to follow, but the Ford squad sealed the silverware when Anton Marklund was denied a spot in the final and both Ford team-mates went through.  “I am so proud of my team – to win this trophy with Olsbergs who have worked so hard all year is such a good feeling,” beamed 18-year-old Nitiss.

Speaking on behalf of VW Marklund, team driver Anton said: “It’s always disappointing to be second but actually our aim at the start of the year was to finish in the top three so this is something we must all remember.  I think we have learned a lot for next year and we will be back and fighting hard.  Topi finished second in the drivers’ standings to finish the year with two second places is something our whole team are really happy with.”

After another impressive drive in the Peugeot 208 Supercar, 22-year-old Timmy Hansen finished fourth in Argentina for Team Peugeot-Hansen.  The talented driver also ends the season fourth overall. Team-mate Timur Timerzyanov showed good pace in San Luis but retired on the first lap of semi-final two following a technical issue with his car. Despite showing good speed, Britain’s Liam Doran had a troubled return to World RX. The Monster Energy World RX Team driver failed to qualify after a technical infringement cost him a spot in the semi-finals.   Team-mate Henning Solberg was also denied a place in the semis after the driver struggled with car issues on day one. The year ended on a high for Scottish-based team Albatec Racing who had both drivers in the semi-finals for the first time this season. Elsewhere local driver Miguel Baldoni had an impressive RX debut as the former Argentine Rally Champion entertained the local fans by finishing the event ninth overall.

Martin Anayi, World RX Managing Director for IMG Motorsports, concluded: “It’s been a sensational year for the FIA World Rallycross Championship and it’s remarkable to think that our season has started in the same way it ended – with a victory for Petter Solberg. I’ve witnessed first-hand how hard Petter and the PSRX Team have worked this year and their win is thoroughly deserved.  The Teams’ Championship could have gone one of three ways this weekend and all three of our teams would have been very worthy winners.  Very well done to the Ford Olsbergs MSE who came out trumps. I firmly believe we have some of the most talented drivers on the globe competing in World RX and it’s incredible to have two 18-year-olds on the podium in Argentina this weekend [Eriksson and Nitiss].  The future of the sport is looking very bright but now we are concentrating on making 2015 even better. On behalf of IMG Motorsports, I’d like to thank the drivers, teams and everyone involved in helping to make World RX a huge success in what has been an incredible season for the FIA’s newest World Championship.”