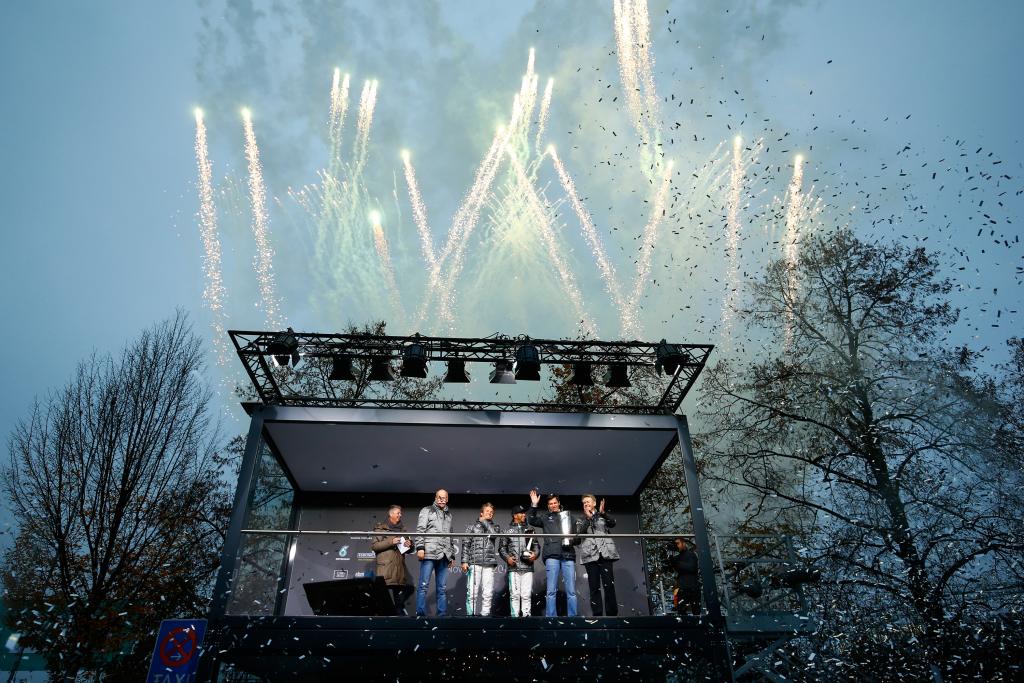 Mercedes-Benz organised a spectacular conclusion to the 2014 sporting year on Saturday, November 29th with Stars & Cars in Stuttgart. 50,000 visitors came to the event based around the Mercedes-Benz museum in Stuttgart to honour Formula 1 World Champion Lewis Hamilton, his team-mate and world championship runner-up Nico Rosberg and Silver Arrows constructors’ champions MERCEDES AMG PETRONAS.

“The reception from the fans here in Stuttgart was absolutely indescribable,” said Formula 1 world champion Lewis Hamilton. “I celebrated my first world title with spectators here at Stars & Cars back in 2008, but this year, they have topped even my expectations. The atmosphere was fantastic and a fitting

conclusion to this incredible season. I never thought in a million years that I would receive such support. Winning this title was the best moment of my life. The team turned in an extraordinary performance, for which I would like to thank all my colleagues in the factories at Brackley, Brixworth and here in Stuttgart. Our progress since last year has been absolutely phenomenal.”

This was the double world champion’s first appearance in a Silver Arrow since winning the world championship last Sunday in Abu Dhabi. Hamilton, Rosberg and many other current and former racing drivers thrilled the audience by performing demo laps on a temporary 1.1 km track close to the Mercedes-Benz museum, driving Mercedes-Benz racing cars that represent 120 years of motor racing history.

Nico Rosberg: “2014 has been an incredible year for me. I am proud to be part of this fantastic team. Driving my Silver Arrow this season has been enormous fun. It was an amazing experience for me. I’ve been

particularly inspired by the huge support from my fans around the world. It gave me extra strength yet again. I’ll be back on the offensive next year.”

A total of 64 vehicles took part in 20 car runs. The oldest vehicle was the grand prix racing car from 1914 with which Mercedes achieved a legendary triple victory in France. The most modern car was the Silver Arrow of world champion Hamilton. In the past Formula 1 season, Hamilton and Rosberg took the Mercedes AMG F1 W05 Hybrid to a total of 16 grand prix wins – more than has ever been achieved by any team in one season. Eleven of them were one-two victories, which is also a new record.

The most spectacular run of the day was dedicated to the three letters SLR. The six SLR vehicles driving on the track around the Mercedes-Benz museum, among them the Uhlenhaut Coupé, are valued at well in excess of 100 million euros. Many VIP guests attended the event, including legendary motor racing greats Hans Herrmann, Stirling Moss and Klaus Ludwig and sports stars like professional golfer Martin Kaymer, head national football coach Joachim Löw and manager of the German national football squad Oliver Bierhoff.

Head of Mercedes-Benz Motorsport Toto Wolff: “This event was the most fitting way to bring to a close this wonderful anniversary season, celebrating 120 years of motorsport and 80 years of the Silver Arrows. We could not have devised anything better. Stars & Cars gave us the chance to say thank you to our loyal fans for their

great support after a long motor racing season. It was just brilliant to hear the engines of current and classic Silver Arrows firing up around the Mercedes-Benz museum. Once again this year, Stars & Cars provided a unique blend of modern and classic motor sport.”