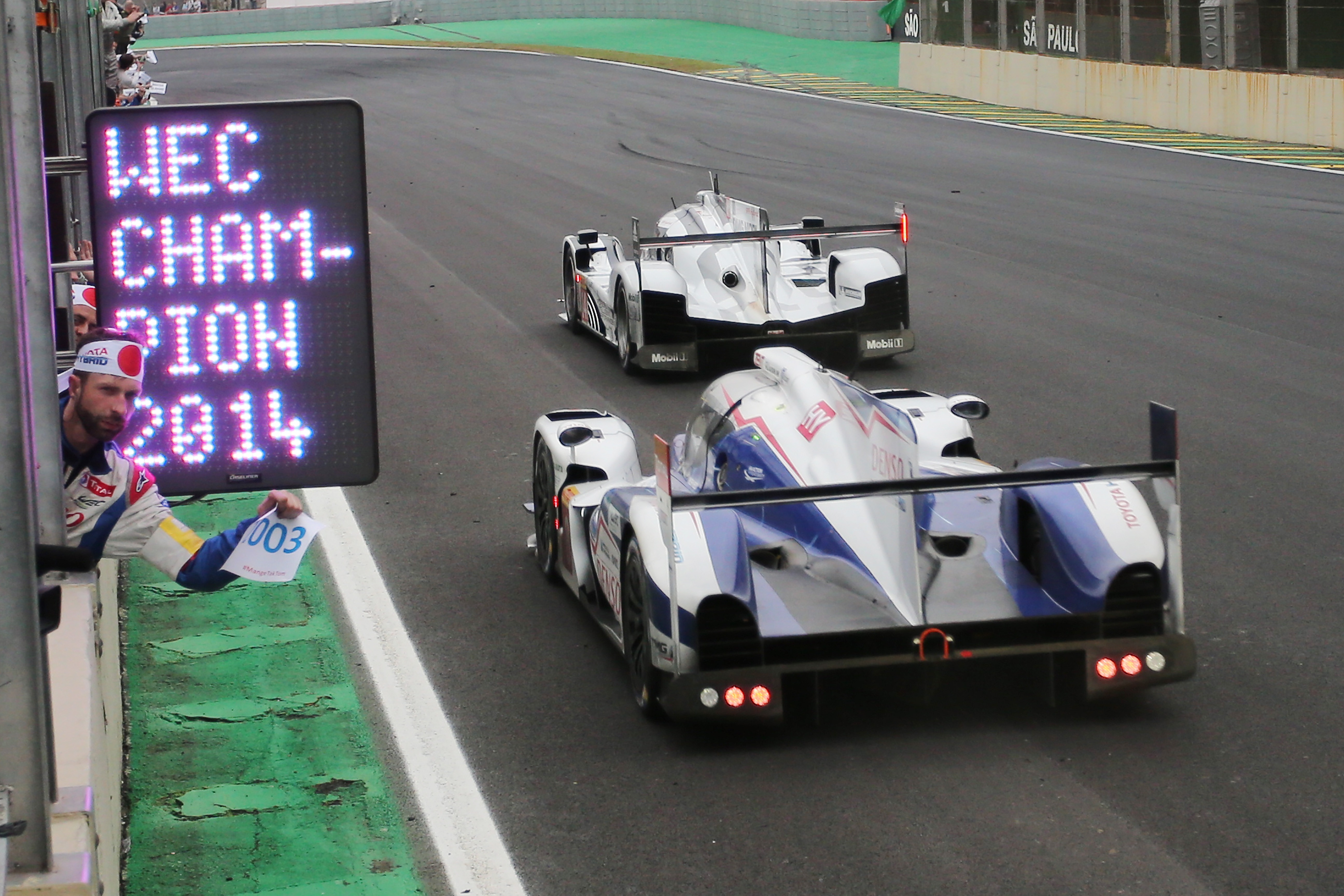 TOYOTA Racing is the 2014 drivers’ and manufacturers’ World Champion after a successful conclusion to the FIA World Endurance Championship season in the Six Hours of Sao Paulo, at Interlagos. The eighth and final race of the season was a thrilling one, with the #8 TS040 HYBRID of World Champions Anthony Davidson and Sébastien Buemi finishing second after a late safety car halted a

potentially-successful battle for victory. The #7 of Alex Wurz, Stéphane Sarrazin and Mike Conway were handed a harsh drive-through penalty which meant they finished fourth. That also dropped Alex and Stéphane to fifth in the drivers’ championship. But the focus was on the team result today, with TOYOTA ending a 15-year wait for a title, following the 1999 World Rally Championship triumph.

Today’s result marks a historic moment in sportscar racing history as it is the first time a Japanese manufacturer has won the World Endurance Championship in any of its guises since its inception in 1953. It also marks a significant milestone for the TOYOTA HYBRID System – Racing. The project to pioneer a motorsport hybrid system began in 2006 and in July 2007 a TOYOTA Supra became the first-ever hybrid winner, in the Tokachi 24 Hours. That pioneering super capacitor technology has been extensively developed, reducing weight and increasing power, leading to the 1,000PS, four-wheel-drive TS040 HYBRID which has simultaneously reduced fuel consumption by 25% compared to 2013. In the new efficiency-focused LMP1 regulations, TOYOTA technology has triumphed, with the TS040 HYBRID winning five of its eight races and taking four pole positions, 12 podium finishes and four fastest laps. Nevertheless, that success has been far from easy and the team appreciates the close and fair competition from Audi and Porsche which has made the 2014 season exciting and very rewarding.
Today’s race marked the end of an era in endurance racing as Tom Kristensen retired from the sport. What he has achieved is truly remarkable and everyone at TOYOTA Racing wishes him the very best in his racing retirement.

Akio Toyoda, President, TOYOTA Motor Corporation: “After only three years in the FIA World Endurance Championship, I’m overjoyed that TOYOTA Racing was able to win both the drivers’ and manufacturers’ World Championships this season with the TS040 HYBRID. I must express my sincere gratitude to our fans for their encouragement and our partners for their support. I would also like to say congratulations and thank you to all the drivers and racing team staff who worked so hard and closely together throughout the season. TOYOTA will use these experiences in the FIA World Endurance Championship to help revolutionize hybrid technology and to help make ever-better cars that delight people around the world.”

Yoshiaki Kinoshita, Team President: “Today’s race was truly one of the most exciting I have been involved with. I am very proud of the result, especially considering the power loss we suffer at this altitude. Happily our hybrid system worked well which helped particularly with traffic management. Everyone pushed to the limit to find the final tenth of a second. To win both World Championships is one of our biggest achievements in motorsport. Thank you to everyone who has supported us and worked with us to achieve this incredible result. Our team and drivers have been superb this season; everyone has played their part, including Kazuki Nakajima and Nicolas Lapierre who are not with us here in Sao Paulo. We have been fighting against strong competitors who have an incredible history in endurance racing. This makes our achievement even more valuable to us. We will enjoy this moment but immediately we will be working hard to retain our titles in 2015.”

TS040 HYBRID #7 (Alex Wurz, Stéphane Sarrazin, Mike Conway)
Race: 4th, 248 laps, 7 pit stops. Fastest lap: 1min 18.778secs
Alex Wurz: “It has been amazing as a team to win the manufacturers’ World Championship, which is well deserved for TOYOTA Racing. It was really fun racing today; I enjoyed it. The car was good, especially in my second stint but less fun was to get a drive-through penalty for what I consider just racing. Never mind, I respect as always the decision of the race stewards but it’s hard to take as it dropped us from third in the drivers’ championship. We had some very fast race weekends but didn’t have the luck this year.”
Stéphane Sarrazin: “It is a very good season for TOYOTA and me. We are World Champion manufacturers, just amazing. The whole team has worked so hard not only this year but since the very beginning of the project and this is a fantastic reward. Our car has been strong in every race and that is really a credit to how well the team has performed. For us in our car we are very disappointed because we thought the penalty was harsh. That cost us positions in the race and the championship which was disappointing.”
Mike Conway: “As the race was unfolding it was a huge fight between TOYOTA, Porsche and Audi. It was really close. We saw a few different strategies but ultimately we were looking at a podium. We pushed flat-out all the way to try to get the car up there but it’s just a pity we couldn’t have had a restart because I think both cars could have made up positions. Obviously it is a great day for TOYOTA. World Champions; that was the objective this weekend, so huge congratulations to everyone. It’s great to be part of the team.”

TS040 HYBRID #8 (Anthony Davidson, Sébastien Buemi)
Race: 2nd, 249 laps, 6 pit stops. Fastest lap: 1min 18.399secs
Anthony Davidson: “It wasn’t the way we wanted to win the manufacturers’ World Championship but it was good fun trying to win the race today. We didn’t expect to be fighting for victory so that was in a way a bonus. It also shows why we are the champions because we didn’t give up at all today. We pushed Porsche all the way to the end. Although we were denied the chance to fight to the flag, it was still good fun. Congratulations to Porsche who did a great job all weekend. I want to say big thanks to the team for all their hard work this year. It has been good fun being part of it.”
Sébastien Buemi: “I am really happy because together with Anthony we did a great race. We did a few mistakes but we were pushed to the absolute limit by the Porsche guys and I think they deserved the win. We are a little disappointed because we thought we could have fought hard at the restart. But we are really happy overall with the performance and winning the two titles. It’s been a great year for us. We are drivers’ and manufacturers’ World Champions and now we look forward to next year.”