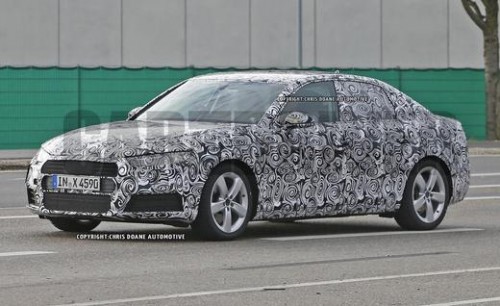 Spy pictures have emerged of the new 2016 Audi A4 Sedan. This is the new car form Audi which is aimed at entry level but

luxurious. It has been pictured in prototype form and it is well disguised. It is expected that the car will compete against the Mercedes-Benz C-class as well as the BMW 3-series plus new vehicles from Lexus and Cadillac. The luxury brands are highly judged even their entry level models and so this could be a significant vehicle. The A4 is a big model for Audi even though the Q5 is more popular than it according to US sales figures. It therefore sees pressure to sell well as well as the A3 sedan being launched internally which it needs to make sure it can compete with. It will  also need to make sure that will be better than the Mercedes-Benz new C-class and have  higher MSRP. The new vehicle will use the second generation MLB modular architecture. This is an evolution of the A4’s platform and it will have more lightweight items on it so that it will be at least 200 pounds lighter.

MLB means modular longitudinal architecture when it is translated back from the German and it has the engines positioned in a lengthwise way which is like a rear wheel drive car but it is front drive. The A4 is expected to look rather edgier than its current look. The disguised model pictured here looks like it has a sportier roof line which looks rather like the current A4 model. It also looks like it has some pointy edges and a pair of air intakes on the front fascia. The side mirrors are angular and more chiselled than they were before. The headlights are also different looking longer and more squinty than the current ones and the back lights are similar in shape as well. It is expected that inside there will be a TFT digital gauge cluster and the latest MMI infotainment controller that was in the 2016 TT. However, there will be centre stack display. This will be featured in just a few of the new Audis.

t will be powered by a 2.0 litre gasoline four cylinder engine which will be turbocharges. There will also be a S4 which will have a 3.0 litre V6 which will be supercharged. It is thought that the RS4 will change its V8 for a V6. It is thought that there will also be a four cylinder diesel option and a plug in hybrid model. These options will depend on where in the world it is sold of course. Some places may see a 1.4 and 1.8 litre four cylinder engine option as well as diesel options. It is expected that there will be a choice of transmissions with a sex speed manual or a seven speed dual clutch automatic option. It is possible that there might be a front drive model as a base but expected that most of the A4’s will have a Quattro all-wheel drive system. It is expected that the 2016 Audi A4 will be appearing later this year as there has been a delay. It should appear in the US early in 2015. It is thought that the pricing will start at $35,000 as this seems to be the starting area for prices in this segment of the market at the moment.