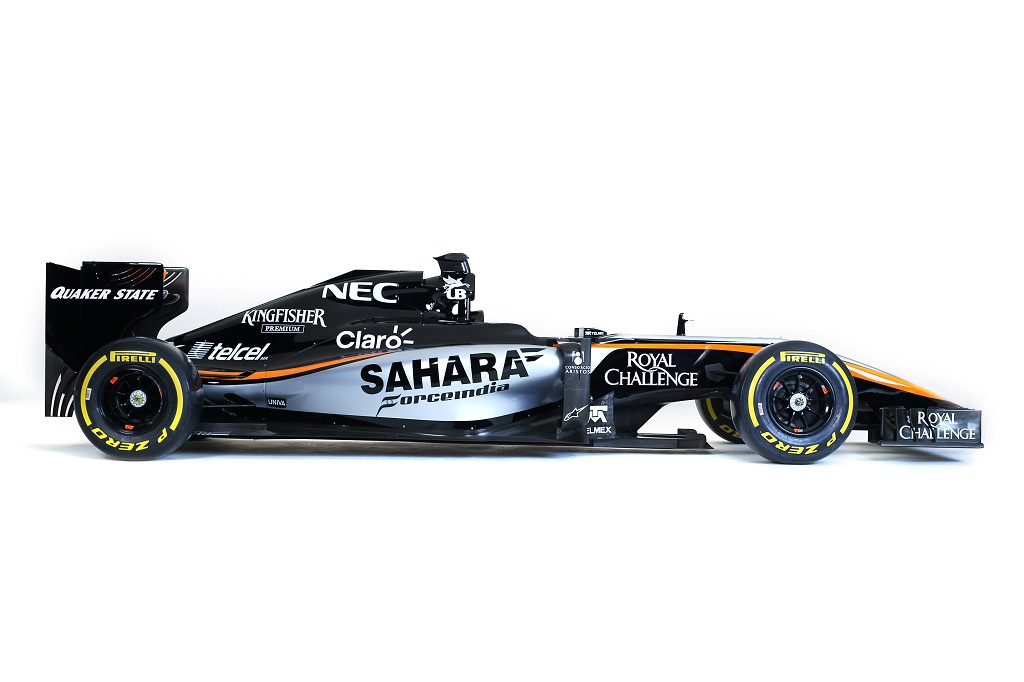 Sahara Force India launched its 2015 season today offering fans and media a first impression of how the VJM08 will look when it makes its track debut next month. A spectacular event at the Soumaya museum in Mexico City saw Sergio Perez and Nico Hulkenberg pull back the covers to reveal the team’s fresh new look for 2015.

The new car livery is guaranteed to get heads turning. The chassis features an elegant combination of silver and black with the team’s traditional colour of orange streaking from the nose cone to the rear of the car in two symmetrical curves.
Key to the new livery is the introduction of several commercial partners for 2015. Prominent NEC branding appears on the engine cover to signal the beginning of a relationship with the global ICT firm based in Tokyo, Japan. Also on the engine cover are the logos of telecommunications brands Claro and Telcel as America Movil begins its second season supporting the team.

Branding from world-famous tequila brand, Jose Cuervo, features on the car’s headrest, while logos from Latin America’s leading insurance broker, Inter, appear on the front wing end plates. Motor oil brand, Quaker State, also partners with the team placing its logos on the rear wing end plates. The team is also delighted to extend its partnership with Smirnoff for a second season, in addition to the continuation of long-time partners United Spirits, Kingfisher and Royal Challenge.
Team Principal, Dr Vijay Mallya, was the first to praise the team’s new livery: “It’s another evolution of the contemporary look we introduced last year, which reflects the growth of the team and the global brands with which we are working. I love the addition of silver, which makes the car appear more sleek and aggressive and I’m sure it’s something that will appeal to the fans as well. Our traditional team colours remain integrated in the livery, but we’ve given it a very modern twist.”

With relatively stable technical regulations, the VJM08 has been designed with evolution rather than revolution in mind. The most significant changes from the outside will appear at the front of the car with the lowering of the front of the chassis and nose. “The front of the car looks very different from what we had developed previously,” explains Technical Director Andrew Green. “It is a redesign that involved a lot of work over the winter, as the new regulations caused a loss in terms of downforce and we’ve been working to claw back all that performance.”

The VJM08 will also feature several subtle changes, including modified sculpting of the sidepods and new cooling intakes. Underneath the skin there will be a completely new rear suspension layout with a new hydro-mechanical system replacing the original torsion springs. The VJM08 is expected to make its track testing debut in Barcelona next month with the VJM07 running at the first test in Jerez.