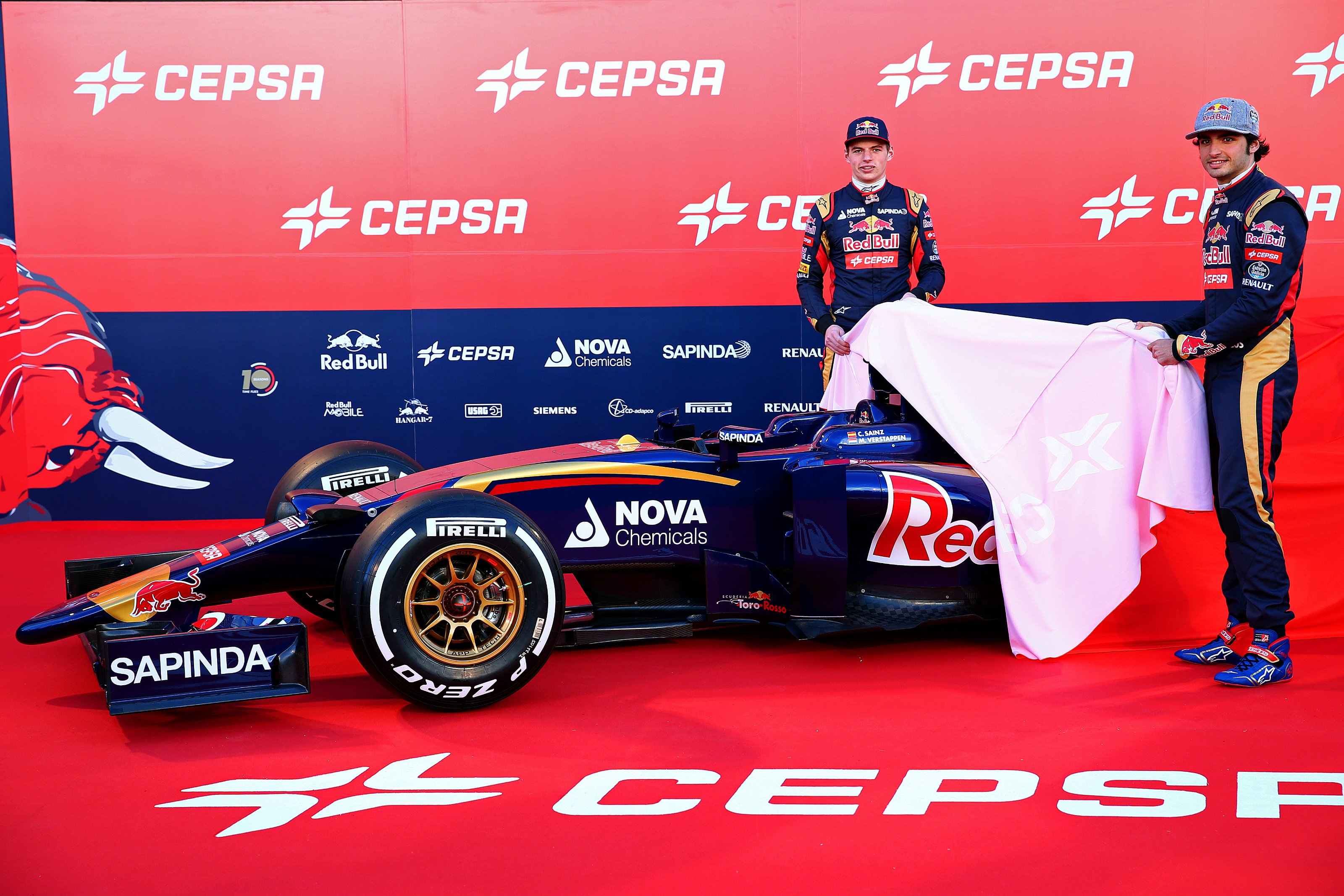 The STR10 was revealed today at the Jerez de la Frontera circuit in southern Spain. As the car’s codename implies, 2015 will be Scuderia Toro Rosso’s tenth year in Formula 1 and CEPSA, who hosted today’s launch, has sponsored the team for the past 4 years.

The drivers Max Verstappen and Carlos Sainz whipped the sheets off Scuderia Toro Rosso’s challenger for the 2015 Formula 1 World Championship in the Jerez pit lane, the day before the serious business of testing gets underway with four days of track action. The STR10 has been produced under the technical directorship of James Key, Chief Designers Paolo Marabini (Chief Designer – Composites & Structures) and Matteo Piraccini (Chief Designer – Mechanical & Systems.) Built by the team in Faenza, Italy, it owes its shape to the efforts of our Wind Tunnel staff in Bicester, UK. Carlos Sainz, will have the honour of being the first to drive the new car tomorrow, here in his native Spain. Our other rookie Max Verstappen will drive on Monday and Wednesday, with Sainz back in on the Tuesday.

Franz Tost Team Principal
“The launch of the new STR10 car today here in Jerez de la Frontera marks the start of a new and hopefully thrilling F1 season. We are delighted that CEPSA has hosted us again and I’d like to take this opportunity to thank them, as well as our other long-term partners, Red Bull, Nova Chemicals and Sapinda, for their continuous collaboration over the years and I’m especially pleased that they are with us again this season as Scuderia Toro Rosso marks a decade in Formula 1. I’m also happy to welcome our new sponsor Estrella Galicia 0,0, who has just joined us today.”
“The 2015 season is a new challenge for all of us. We’ve put a lot of work into the STR10 and we are convinced that we will have a successful year. Our objective is to finish fifth in the constructors championship and we are ready to do our best to achieve it. Our engine partner Renault has also worked very hard to come up with new modifications and I’m sure that our joint effort will give us a package which will certainly be very competitive. All in all, we have a much stronger team as well as a very competitive STR10 and fast drivers; it’s a great combination.
“Another point that also makes me happy is that we have a very high-skilled young driver pairing which makes this season even more exciting. They both showed fantastic performances throughout their career, winning races and championships, and it’s because of their driving skills that Red Bull has decided to bring them to Scuderia Toro Rosso. I’m really sure that they are very well prepared for this challenge, as is the rest of the team. We are ready for it!”
Carlos Sainz
Car number 55 – driving duties: 1st & 3rd February
“I am very happy to be making my first official appearance as a Formula 1 driver here in Spain and I am looking forward to trying the car for the first time tomorrow. I have worked very hard over the winter on my personal fitness, as well as spending time in Faenza to familiarise myself with the team, having also done some days in the simulator. Now we have

just 12 days to prepare for Melbourne, so going through all the race weekend procedures will be a priority for me, as well as putting in as many miles as possible behind the wheel.”
Max Verstappen
Car number 33 – driving duties: 2nd & 4th February
“I can’t wait for the season to start and tomorrow will seem like a very long day, watching Carlos in the car! With two days in the 2014 car at the Abu Dhabi test and the Friday mornings I did last season, combined with time spent in the simulator, I feel well prepared and I’m really up for this challenge, which is very exciting.  Six days on track here in Spain and then it will be time to head for Australia and my first Grand Prix, something I have been looking forward to ever since I started karting.”