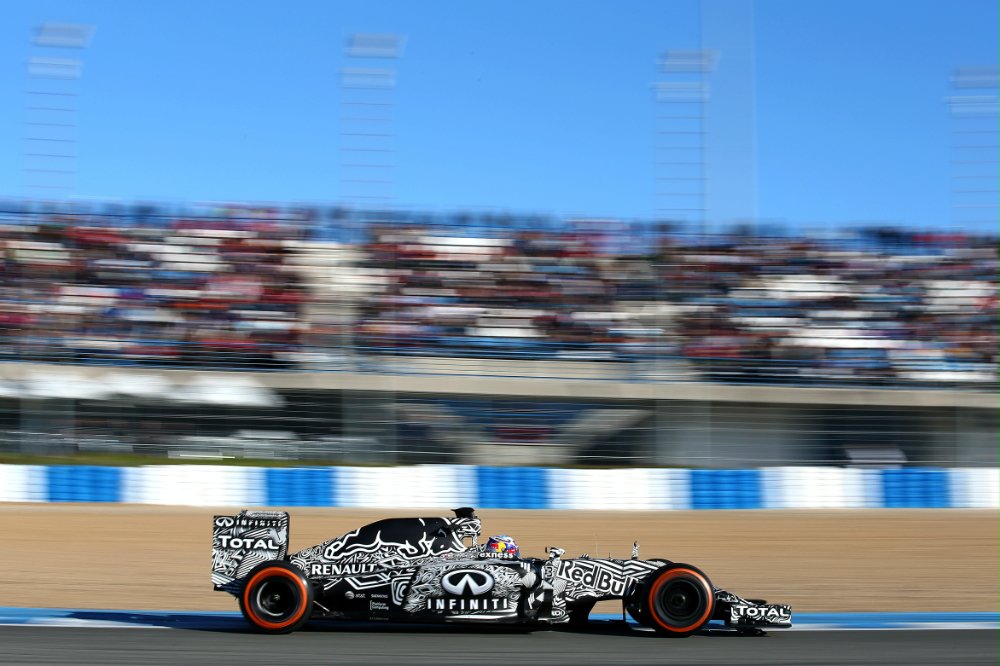 Infiniti Red Bull Racing’s 2015 challenger, the RB11, made an eye-catching debut at the first pre-season test of 2015 in Jerez on Sunday 1 February, with the team’s new car taking to the track in a striking black and white “dazzle” livery, similar to those used to camouflage prototype road cars.

After starting testing bang on 9am, there was a sense of achievement felt among the team at the end of the day as a solid set of sessions saw Daniel Ricciardo rack up 35 laps and the day’s fourth best time. “We got going pretty well this morning and I got a few laps under my belt,” said Daniel. “So the first impressions are good. We’ll get a few more laps over the next few days, but so far everything seems pretty encouraging. I can feel a step forward. I won’t go into too much detail but it’s there. We didn’t do a whole lot of laps but definitely more than at this test last year! In general everything is behaving as it should. Obviously we had a couple of issues, but once the car is running it’s all going pretty normally. A good first day, there are some positive signs there.”

Commenting on the interim livery Daniel added: “The livery’s cool. It’s a testing specification for us but I think it looks really good. Maybe I need a matching helmet.”

Head of Race Engineering Guillaume Rocquelin added: “It’s no exaggeration to say that today represented a good day for the team and for the RB11. The car preparation has been good, the day’s running was by and large excellent and we’ve already gathered a lot of information. The day generally went according to plan, starting cautiously, building up the length of the runs and learning all the time. We had a small issue with the brake controls system around lunchtime but you’re always going to have little niggles like that on day’s like this. We stopped running late in the afternoon with a technical issue, but it wasn’t too serious. An alarm went off on the engine and at that stage of the day, knowing that an investigation would take time we chose to stop. Aside from that, everything went pretty as we hoped.”