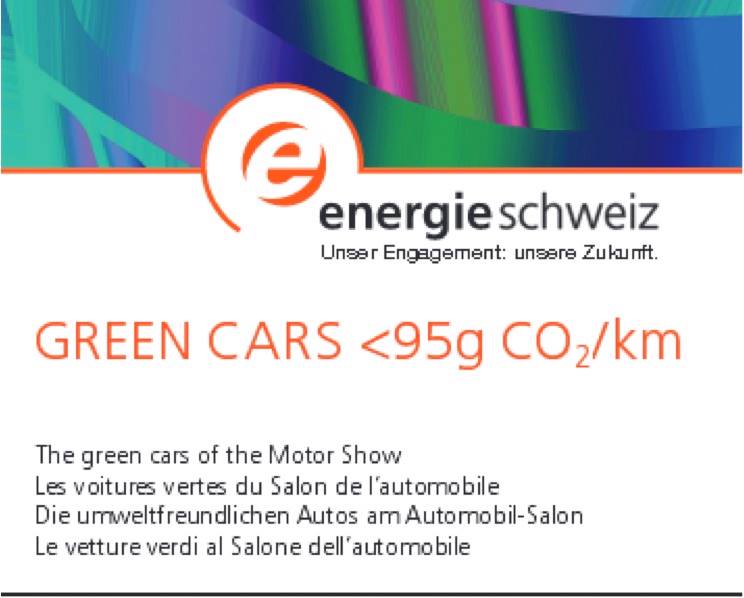 For the second consecutive year, the Geneva International Motor Show, in collaboration with the Swiss Federal Energy Office, as part of “SuisseEnergie”, a national platform for the promotion of energy efficiency, will publish a leaflet containing all the ”Green” cars exhibited at the Show,. This document lists all models on display at the Salon which emit no more than 95 grams of CO2 per kilometre, regardless of their means of propulsion. This figure complies with the average emission level due to be imposed by the European Union on all new cars from 2021. Of 900 or so cars on show, around 100 already meet these criteria today.

The leaflet will be distributed at the entrance to the Motor Show and on the Association e’mobile stand (Hall 5, Stand 5141). The list can also be found online at the Motor Show website www.salon-auto.ch.

The Swiss National Counsellor, Mrs. Doris Leuthard, who will officially open the Geneva International Motor Show on 5th March 2015, has made her choice. Some time ago she swapped her official car for a Tesla. It remains to be seen whether she will be at the wheel of this 100% electric car for her visit to the Show.

Although automotive engineers and craftsmen have always focused on improving all aspects of cars as a whole, the public was primarily interested in their performance, thereafter in their safety imposed by an increase in traffic, and finally by advances in more economic and ecological propulsion technologies. The 2008 economic crisis of compelled the automobile industry to redouble their efforts in this domain.

In order to respond to the demands of a new generation of car owners, manufacturers put their foot on the accelerator to develop a full array of alternative drive systems (electric, hybrid – petrol/electric, diesel/electric, hydrogen, natural gas, biofuel), to which the “downsizing” of the combustion engines was also used as a means of decreasing fuel consumption.

In fact, Toyota launched its first hybrid model, the Prius, back in 1997, followed by Honda with their Insight model in 1999. Ford commercialized the first hybrid SUV, the Escape, in 2004, followed by Dodge with their RAM pickup truck and Chevrolet with their Silverado. New concept cars always seem audacious and sometimes far-fetched when first presented. In 2009, they were presented all together for the first time in a dedicated “Green Pavilion” at the Geneva International Motor Show, providing visitors with an overview of the evolution, or even revolution, that the automobile world was about to experience.

Today, all the major manufacturers produce «clean» cars. The brands of sports cars (Ferrari, Lamborghini, Lotus, Porsche), high-end cars (Audi, BMW, Lexus, Mercedes) and more recent arrivals (Tesla) have followed in their footsteps. The Nissan Leaf, a 100% electric car, was voted Car of the Year in 2011, and the Opel Ampera/Chevrolet Volt, an electric/petrol hybrid, received the same accolade in 2012. A new FIA International motorsport championship, Formula E, has been launched for single-seater racing cars which are 100% electric and is already in its first season in 2014-2015.