La Force India in marcia per i test di Barcellona 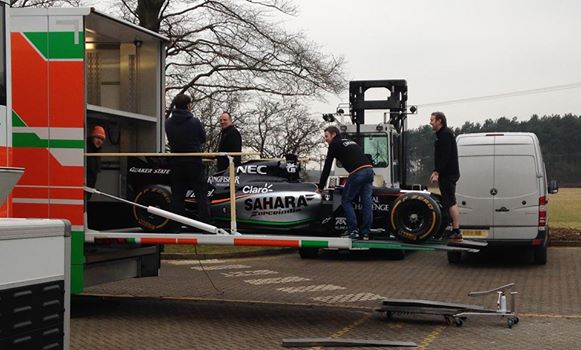 Signs of life emerged from Force India on Friday. The Silverstone based team sat out the opening test of the winter at Jerez amid rumours of financial problems and crippling debts to suppliers. Team racer Nico Hulkenberg has at least been filling his idle time with track action, testing the new Porsche in Bahrain this week ahead of his Le Mans debut later this year. And it looks as though the delay in readying Force India’s unseen new car, the VJM08, is set to continue as the rest of the sport prepares for next week’s second test in Barcelona. But Force India will at least be there at the Spanish grand prix venue.

It emerged on Friday that the Vijay Mallya-led team has packed up its transporters and is currently bound for Barcelona, albeit with only the 2014 car in the baggage. Indeed, the 2015 machine has not yet seen the light of day, with Force India having ‘launched’ in Mexico City last month with a 2014 show-car fitted with a new-style nose. Team figures, however, deny that Force India is in such trouble it might be in doubt for the Melbourne season opener. But deputy boss Bob Fernley told the British broadcaster Sky that funding issues for midfield teams at present are “very critical”.

So it was with some surprise that Force India recently blocked Marussia’s bid for dispensation so it can start the 2015 season with its old car. Fernley denied that was simply a grab for a share of the ailing team’s official prize money millions, but he did admit: “Have we got some of our own issues? Yes we have, but we’ll deal with those. It’s tough. It would be wrong for me to say we’re all having a wonderful time – we’re having a tough time and costs are rising”.