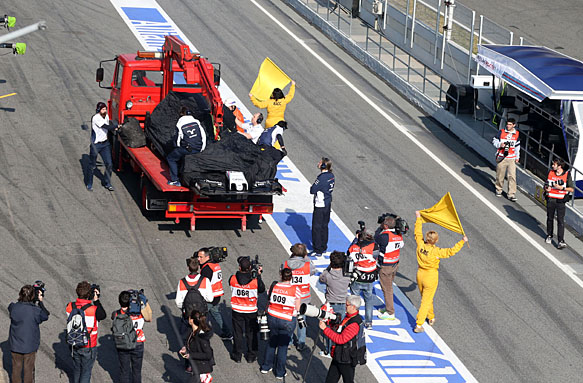 Susie Wolff declared her collision with Felipe Nasr in Barcelona Formula 1 testing a “stupid” incident, as the two drivers blamed each other for the tangle on Thursday. The Sauber racer and Williams test driver came together at Turn 5 while Wolff was on an out-lap and Nasr on a flying lap. Wolff said Nasr had moved across before completing the move, with circuit video footage showing the Sauber flying over the front of the Williams.

“I stayed completely on my line, I didn’t expect him to move across as aggressively as he did,” said Wolff. “He hit my front left with his rear. I went straight over to him and asked what the hell went on? He was a bit speechless. And to be honest I was a bit speechless. It’s stupid. For me what’s clear is that I’m staying straight, I don’t know if he expected me to move over or whether he was trying to optimise the corner entry. But if you know I’m there, he could have just gone into the corner. I’m not here to say I blame him, it happened. It was a stupid, unnecessary thing to happen.”

Nasr argued that Wolff had appeared to be making space for him and then ran into the back of his car. “I caught up with her at Turn 4 and I could see her moving to the right so I thought that she knew I was coming,” he said. “Then I committed myself to the braking into Turn 5 on the inside, and I felt a big hit on my rear suspension. I asked her if she saw me and she said ‘no, she didn’t see me coming’.”

Both cars were repaired before the end of the day, but Wolff’s subsequent running was limited by an oil pressure problem and Nasr was asked to stop on track by Sauber when it spotted an abnormality in the data. Wolff had completed comfortably the most laps in the field prior to the incident and ended the day on 86, while Nasr managed 79.