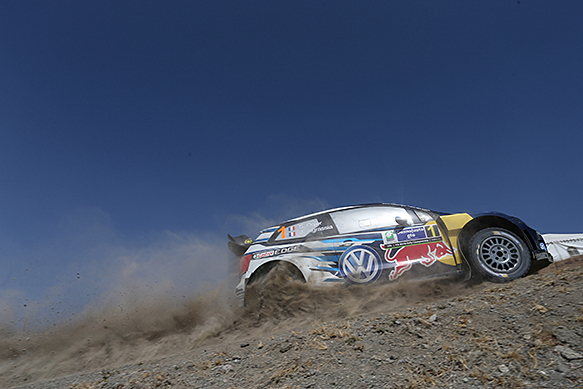 Sebastien Ogier mate it a hat-trick of victories at the start of the 2015 World Rally Championship season with a dominant Rally Mexico win. The Frenchman’s third successive triumph on the South American event looked a sure thing from the moment Volkswagen team-mate Jari-Matti Latvala reached the end of SS12 with the left-rear wheel missing on his Polo R WRC. Ogier made his own luck though, leading the rally at the end of each day despite insisting beforehand that even a podium finish would be a tough ask due to being first on the road at the beginning. But as Latvala, Citroen’s Kris Meeke and Hyundai’s Thierry Neuville suffered disastrous events, Ogier completed a perfect rally and delivered a crushing powerstage victory to end up more than a minute clear of the squabble for second between Mads Ostberg and Andreas Mikkelsen. The DS 3 and Polo were separated by just five seconds going into the final day, and ultimately it was the superior pace of Ostberg that clinched the position ahead of his fellow Norwegian, who took his third consecutive third-place finish of 2015.

Ostberg took wins on SS9, SS16 and the 46-mile Guanajuatito stage compared to Mikkelsen’s sole fastest time on SS18, though he failed to pick up additional points on the powerstage as the VW man followed team-mate Ogier home in second. The attritional nature of Rally Mexico handed Elfyn Evans the opportunity to match his career-best WRC result of fourth, a finish he earned on the same event last year and then repeated in Germany.

M-Sport’s Welshman did a superb job to keep his head while other, more experienced drivers lost theirs, and he was relieved of additional pressure from Dani Sordo when the Hyundai i20 WRC picked up a puncture on SS15 and had to settle for a lonely fifth. Back in the top 10 positions, Martin Prokop survived an off on the penultimate stage to bag an excellent sixth in his privateer Ford, with Dakar Rally winner Nasser Al-Attiyah clinching WRC2 glory and seventh overall after long-time class leader Yuriy Protasov suffered an engine problem on Saturday.

Al-Attiyah’s WRC2 classmates Nicolas Fuchs and Jari Ketomaa bagged top 10 positions, while Neuville claimed 10th in the second Hyundai and picked up an additional point with the third-best powerstage time. The Belgian, who had won two of the opening five stages before picking up a puncture and rolling on Friday, was the top returnee as the likes of Latvala, Meeke and Robert Kubica ended up more than 25 minutes further back.

Another Rally 2 runner, Ott Tanak, dominated the headlines for much of the event thanks to his crash into a lake on Friday. His car spent more than nine hours under water but returned on Sunday under Rally 2 regulations and, running first on the road, the Estonian was a popular figure as he completed the rally.