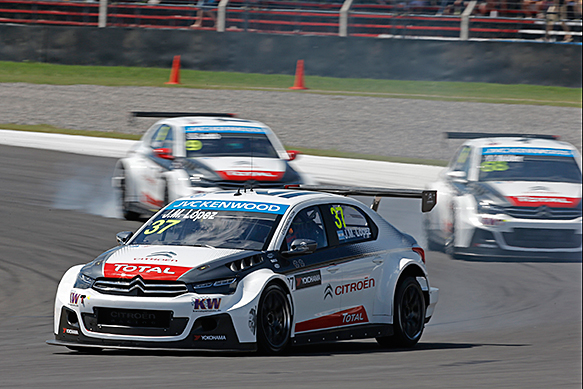 Defending champion Jose Maria Lopez won the opening race of the 2015 World Touring Car Championship in Argentina from Citroen team-mate Yvan Muller. Sebastien Loeb finished third, 7.5 seconds behind the winner, to complete a Citroen 1-2-3. Lopez earned the win courtesy of a hard-fought opening lap. He was slower away from the start than Muller and was second into the first corner, but then edged his team-mate onto the dirty side of the track for the following bend.

“We touched a little bit,” said Lopez. “He gave me a bit of space but it was very on the limit. This race was going to be difficult because we had very similar pace.”

Having reclaimed the lead Lopez built a gap of up to 2.5s, which diminished slightly in the closing laps until Muller backed off on the final tour. There was drama further down the field as fourth-placed starter Ma Qing Hua stalled briefly on the grid, forcing those behind to take evasive action.

Mehdi Bennani, who crashed his Citroen during qualifying on Saturday and started 12th, parlayed the confusion into seventh place, only to come under attack from 11th-place starter Rob Huff in the Lada. Huff briefly got by but on the fourth lap Bennani counter-attacked, launching a late dive under braking at the end of the main straight. The impact broke the Lada’s right-rear suspension and sent Huff limping back to the pits.

Huff’s team-mate James Thompson was also eliminated in an early accident with John Filippi, incurring minor rear-end damage. As the leading Citroens stretched away, the works Hondas of Tiago Monteiro and Gabriele Tarquini held station in fourth and fifth, not quite in the same race.

Chevrolet privateer Tom Chilton mounted a stirring defence of sixth place for several laps before Bennani, Norbert Michelisz and the recovering Ma came by. Bennani was then handed a drive-through penalty that consigned him to a 13th-place finish. Stefano D’Aste steered clear of the drama to finish ninth, while Rickard Rydell – who does not expect to get up to speed in his new Civic for several races, and who qualified 16th – completed the top 10.