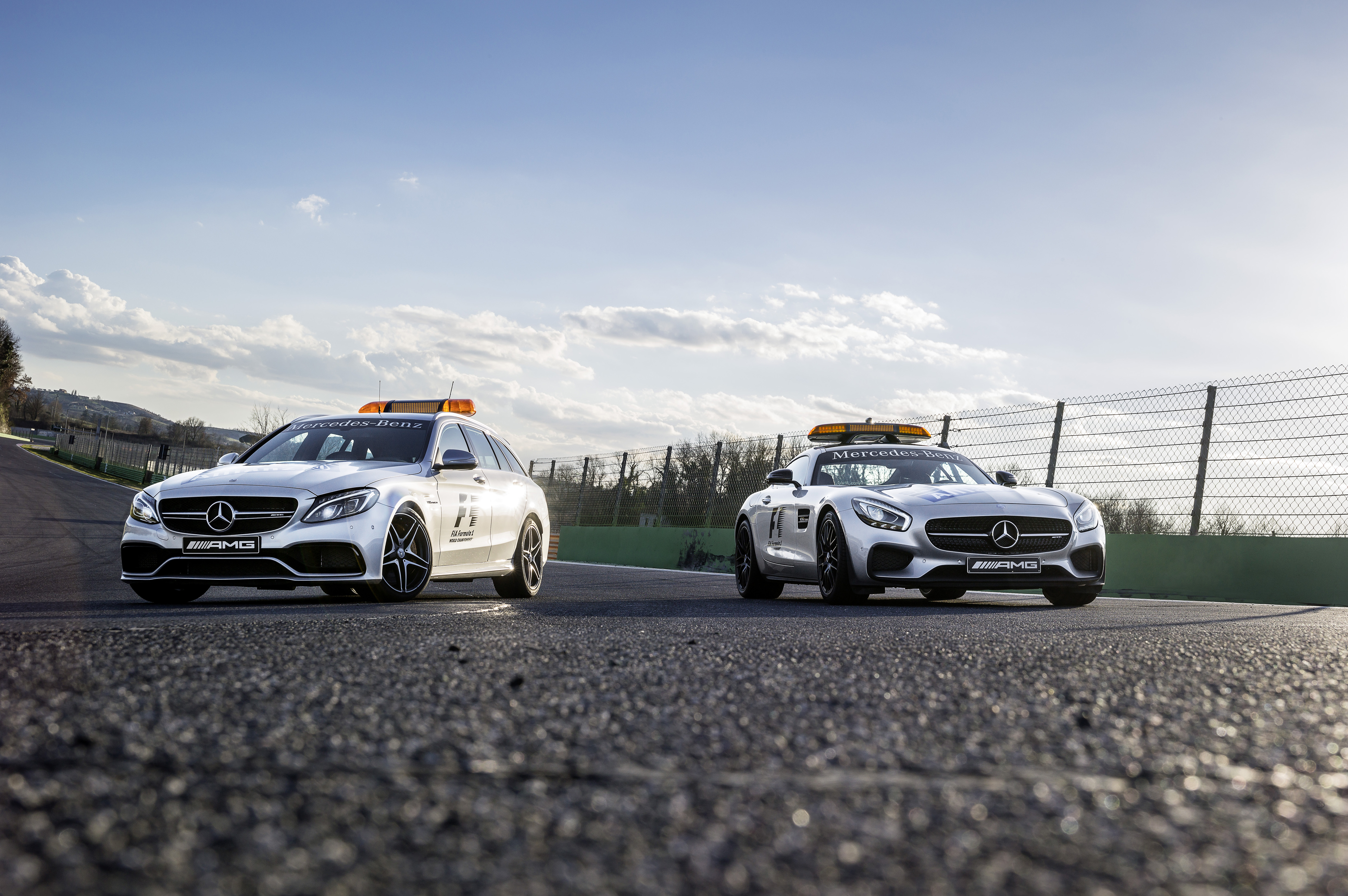 The new GT S is the perfect vehicle to guide the Formula 1® field safely around the track when bad weather conditions or accidents necessitate deployment of the Safety Car. The second sports car developed independently by Mercedes-AMG boasts ideal credentials for this tough job in the premiere motorsport competition. The front mid-engine concept with transaxle, the V8 biturbo engine with dry sump lubrication, the dual clutch transmission and the cutting-edge sports suspension with aluminium double-wishbone axles provide the basis for fast laps on the race circuit. Excellent driving dynamics are in the DNA of the Mercedes-AMG GT S: the intelligent aluminium lightweight design guarantees not only a low vehicle weight but also a low centre of gravity for the vehicle and an advantageous weight distribution of 47 to 53 percent between front and rear axle.

Bernd Mayländer (GER, age 43), driver of the Official Safety Car of the FIA Formula One World Championship™ since 2000, notes: “The gull-wing SLS AMG was my official car in Formula 1® for five years. Now I’m looking forward to the new Mercedes-AMG GT S, which I have been fortunate enough to get to know during its development phase. The new AMG sports car won me over immediately with its high-calibre race track performance.” The former DTM driver also works as an instructor for the AMG Driving Academy and as a Mercedes-Benz brand ambassador at selected events.

High cornering speeds, dynamic bursts of speed and fast lap times – the Safety Car is subject to a stringent catalogue of requirements drawn up by the FIA (Fédération Internationale de l’Automobile). After all, it has to be capable of guiding the racing cars from the top class of motorsport around the circuit in extreme situations. And the Safety Car must not go about its work at too low a speed either, in order to avoid the tyres and brakes of the Formula 1® cars cooling down to an excessive degree and to ensure that the engines do not overheat. Bernd Mayländer, who shares the cockpit of the Safety Car with FIA Fuel Analyst Peter Tibbetts (GB, age 59), explains: “We are on stand-by in the Safety Car in the pit lane, waiting for instructions from the race organisers.” When bad weather or any incidents pose a threat to safe continuation of the race, the Safety Car team is duly deployed.

The drivetrain of the Official Safety Car of the FIA Formula One World Championship™ corresponds to the system featuring on the road-going version of the AMG GT S. With a maximum power output of 375 kW (510 hp) and peak torque of 650 newton metres, the 4.0-litre V8 biturbo engine guarantees high-end performance: the GT S dashes from a standing start to 100 km/h in 3.8 seconds and attains a maximum speed of 310 km/h. As music to the ears of the Formula 1® fans in the stands and in front of their TV screens, the GT S is fitted with a modified Performance exhaust system for an even more striking and emotive AMG V8 engine sound.

The Mercedes-AMG GT S clearly has race track performance in its genes, as only a small number of modifications were required to transform it into the Official Safety Car of the FIA Formula One World Championship™. The AMG SPEEDSHIFT DCT 7‑speed sports transmission corresponds 100 percent to the series production unit, for example. The DYNAMIC PLUS package with which the Safety Car is equipped is optionally available to any GT S customer for a further increase in driving dynamics. It comprises dynamic engine and transmission mounts and a specific engine application in “RACE” DYNAMIC SELECT transmission mode and in manual transmission mode “M”. The package also includes tauter spring and damper tuning, more negative camber at the front axle as well as an adapted speed-sensitive sports steering system. The Performance steering wheel in black DINAMICA microfibre and yellow highlights in the instrument cluster round off the AMG DYNAMIC PLUS package.

The Safety Car runs on particularly light cross-spoke forged wheels with fully integrated wheel bolt covers. The forged wheels painted in matt black with high-sheen rim flanges are fitted with tyres in standard size 265/35 R 19 on 9 x 19 (front) and 295/30 R 20 on 11 x 20 (rear). This wheel/tyre combination is also optionally available to customers for the Mercedes-AMG GT and the GT S. The high-performance ceramic composite braking system is also optionally available for the road version of the GT. The advantages of this system are lower weight, a longer service life and even better fade resistance thanks to the ceramic brake discs with a diameter of 402 millimetres at the front and 360 millimetres at the rear.
In terms of appearance, the Mercedes-AMG GT S Safety Car differs from the series production vehicle above all by virtue of the striking FIA and F1® logos and the light bar on the roof. The latter is positioned on a carbon-fibre air scoop that is designed such as to offer the least possible airstream resistance while at the same time providing for an aerodynamically optimised flow of air towards the rear aerofoil. The positioning and design of the carbon-fibre air scoop and the light bar are the result of extensive wind tunnel tests. The rear aerofoil corresponds exactly to the aerofoil included in the Aerodynamics package; it forms part of the particularly exclusive “Edition 1”.

All signalling functions on the light bar are performed by fast-responding, energy-efficient LEDs. Overview of functions:

Mounted on the light bar is a TV camera such as is also used on the Formula 1® racing cars. Another camera is located on the stowage tray behind the seats. The special number plate at the rear with Safety Car lettering and orange/green LEDs is synchronised with the light bar and provides for added safety in the dark or in rain. The headlamps and tail lights perform an additional important signalling function: whenever the Safety Car is on the track, a stroboscopic effect makes the car even more conspicuous.
While Bernd Mayländer is fully focused on the race track and keeping an eye on the Formula 1® field in the rearview mirror, Peter Tibbetts is in radio contact with the race organisers. Mayländer and Tibbetts also communicate with each other by radio. A second radio system is integrated in the cockpit as a back-up solution for emergencies. Peter Tibbetts monitors the Formula 1® vehicles by means of two iPads®. The display of the extendable iPad® on the left shows the International Feed of the Grand Prix, for example. The right-hand monitor can optionally show an animated presentation indicating the current positions of the vehicles on the track or current lap times. Data management for the visual communication solutions is performed by an InCar Hotspot with WLAN.

Various FIA-specific systems, such as are used in every Formula 1® racing car, are also installed – the transponder system for timing purposes, the high-resolution GPS and the standard telemetry, for example. Also on board is the “Marshalling System”, which shows the driver the flag signals for the current section of the circuit by means of three coloured LEDs. In the Safety Car and Medical Car the system is equipped with an additional function – the so-called “Medical Warning Light”. Should an accident occur on the track in which a critical G-force threshold is exceeded, the LEDs will flash several times, prompting Bernd Mayländer and Peter Tibbetts to prepare for imminent deployment.
In order to ensure that the racing weekend goes off smoothly, all systems undergo thorough testing with the Safety Car and Medical Car before and during the event. Six-point seat belts and sports bucket seats with the AMG emblem provide maximum support for the Safety Car’s crew. The interior of the GT S otherwise corresponds to that of the production vehicle.
The new Mercedes-AMG GT S is replacing the SLS AMG, which served as the Official Safety Car of the FIA Formula One World Championship™ from 2010. The gull-wing model was deployed in ten out of 19 races last season and entered the race track 14 times in all.

The Mercedes-AMG C 63 S is debuting on the race track as the second Official Car alongside the GT S, succeeding the C 63 AMG Estate in this role. The new Official Medical Car of the FIA Formula One World Championship™ is on hand to provide fast emergency medical care and is crewed by up to three medics. At the wheel is racing driver Alan van der Merwe (RSA, age 35). His co-driver is the official FIA head physician, Dr Ian Roberts (GB, age 51). The rear accommodates one or two assistant medics from a selected specialist hospital near to the race circuit concerned.
The Medical Car follows the Formula 1® field in the starting lap, as the racing cars are grouped particularly closely together in this critical phase of the race. In the event of an incident, the medics are thus able to reach the scene of the accident as quickly as possible and administer first aid immediately. During the race, the Official Medical Car of the FIA Formula One World Championship™ is lined up alongside the Safety Car in the pit lane.

The Medical Car of the FIA Formula One World Championship™ offers exceptional race track performance to ensure that no time is lost in emergencies: the 4.0-litre V8 biturbo engine of the Mercedes-AMG C 63 S Estate generates a maximum output of 375 kW (510 hp) and peak torque of 700 Newton metres. Acceleration from zero to 100 km/h takes 4.1 seconds. As with the Safety Car, V8 engine, AMG SPEEDSHIFT MCT 7-speed sports transmission, dynamic engine mounts and electronic rear axle differential lock correspond to the road-going version. The Medical Car is also a delight to the ears: the Performance exhaust system has been modified to treat spectators and viewers to an even more striking V8 engine sound.

The engineers have adapted the AMG RIDE CONTROL suspension to the special operating conditions, as the Medical Car carries three to four occupants and emergency equipment in high-speed deployment on the race track. The high-performance ceramic composite braking system at the front axle is also available as an option for the series production version of the C 63 S. The ceramic discs are 402 millimetres in size. The brake callipers feature a special paint finish and striking “AMG Carbon Ceramic” lettering. A high level of grip is provided by the tyres in standard size 245/35 R 19 (front) and 265/35 R 19 (rear), fitted on light-alloy cross-spoke wheels in 8.5 x 19 and 9.5 x 19 featuring a matt black painted finish with high-sheen rim flanges. This optional equipment is also available for every Mercedes-AMG C 63.

Similarly to the Safety Car, the Medical Car is also fitted with an LED light bar on the roof. FIA and F1® logos, headlamps and tail lights with signalling functions and the illuminated rear number plate bearing “Medical Car” lettering distinguish the Medical Car from the series production vehicle. The 490-litre luggage compartment safely accommodates the complete scope of emergency equipment, including defibrillator and respirator.

To provide the occupants with ideal support and safety, the speedy estate is fitted with four sports bucket seats including AMG emblems and six-point seat belts. A radio system enables communication with the race organisers. To enable monitoring of racing activities, two iPads® including InCar Hotspot and WLAN are also installed in the cockpit.
Official Safety and Medical Cars for the FIA Formula One World Championship™ from Mercedes-AMG since 1996
As previously, both Official Cars from Mercedes-AMG will be on hand once again at all Grand Prix meetings of the 2015 FIA Formula One World ChampionshipTM. During the race weekends they guarantee maximum safety not o

nly in Formula 1®, but also at all support races. Two highly qualified AMG technicians oversee the deployment of the Safety Car and Medical Car throughout the season. Mercedes-AMG, Mercedes-Benz’s sports car and high-performance brand, has been actively supporting Formula 1® with Official Cars since 1996.
Redazione MotoriNoLimits