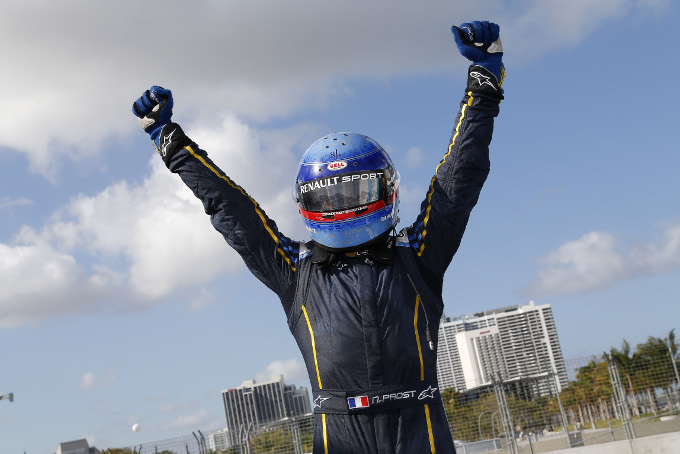 Nico Prost held off a late charge from Scott Speed to take victory in the Miami ePrix. It meant e.dams-Renault became the first team to score a second win, but five races in and we’re still waiting for a driver to do the same.

Prost didn’t look like a potential winner during the first half of the race, as he was muscled out of second place by Virgin Racing’s Sam Bird. Bird chased down poleman Jean-Eric Vergne (Andretti) as the lead pair established a small margin over the chasing pack.

The Brit pulled off a fine overtaking move to take the lead, but almost immediately had to slow to avoid over consuming his energy. The slow lap back to the pits dropped him to eighth place and out of the fight for the win.

Vergne’s hopes were dashed by a long pitstop and then fading energy. With his pace compromised he slipped two laps behind and came home 18th – the last of the classified runners. As Vergne and Bird hit trouble, so Daniel Abt moved into the lead, just pipping Prost as the e.dams racer rejoined from the pits. With Lucas di Grassi close behind, the lead trio circulated in close company, but without ever threatening each other. The action was further back in the top-10, where Speed was in inspired form. Having dispatched team-mate Vergne, he set about and passed Jerome D’Ambrosio (Dragon Racing) and then di Grassi in short order.

Having pitted a lap earlier than his rivals, Abt was running low on energy, and with Speed looming large in his mirrors, Prost knew he couldn’t afford to get stuck behind the German. He took the lead with a superb lunge, but Speed also took advantage of the compromised Abt, and forced his way into second.

The American had Prost in his sights, but there was just a lap left to go. With both drivers giving 100 per cent, it was an enthralling final lap, with Prost doing just enough to hold on for his first win and to take the championship lead in the process.

“It didn’t hit me that I’d won until I got back to the pits because they forgot to give me the chequered flag!” he smiled. “I was still pushing like crazy. It was a really good race. When I got out after my change Daniel and I were side-by-side but then I knew he had to do one more lap so I was still saving a lot of energy thinking that I might get a shot. Daniel was running out of energy so I could overtake him.”

Given he had to race in a plain white helmet such was the last-minute nature of the deal, Speed was understandably thrilled to have driven such a competitive race.

“In qualifying we got held up on both of our flying laps so we had much more speed than 10th,” he said. “The problem we had at the end wasn’t the battery – I had plenty of energy left – but we kept overheating. He [Prost] played his strategy very good too so both of us for the last two laps were at 100 per cent power and I think no one else had that same power so it was a really great race. I think for both of us having to go into the corners at full speed on the last couple of laps when you don’t do that all race was quite tricky and we both had lots of close calls so that made the racing really nice. Having a guy like Michael Andretti calling my race – with his experience – was fantastic and I think for what we had we really maximised our possibilities.”

While Abt was left to rue what could have been, he was very pleased to have scored his first podium. “I’m extremely happy to be on the podium. You know I thought I had it in the first race but was handed a penalty and I also had other chances in previous races but now we finally managed it in Miami. I was leading the second stint after a slightly different strategy but I had two options: stay ahead and use too much energy or give a bit up and be safe for a podium, that’s what I did.”

D’Ambrosio drove a strong race to fourth – his best Formula E result, while Nelson Piquet Jr bagged the two bonus points for fastest lap on the final tour as he came home sixth for China Racing. The Brazilian led during the pitstops as he was able to eke an extra lap’s worth of energy from his battery.

Buenos Aires winner Antonio Felix da Costa claimed sixth for Amlin Aguri, while his team-mate – and FanBoost winner – Salvador Duran bagged his first Formula E point in 10th. The other two recipients were Vergne and Bruno Senna, whose Mahindra Racing car was forced out with a suspension problem.

With the track construction running late, free practice was reduced to a single half-hour session. This hit series debutants Loic Duval and Tonio Liuzzi hardest (Speed had tested the car in Donington so had half an idea of what to expect). After struggling in qualifying, Duval showed his Le Mans-winning class in the race, fighting his way up to seventh for Dragon.

Liuzzi made a strong start and initially ran well, but he struggled with an overheating battery and faded to 16th for Trulli. Di Grassi ultimately came home in ninth, which means for the first time, he’s not leading the championship. With half the series still to run, the fight to become the first-ever Formula E champion is more intense than ever.