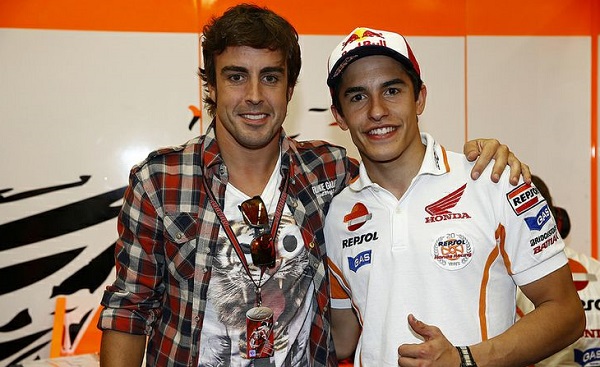 Reigning MotoGP champion Marc Marquez has backed Honda to succeed in formula one. Riding for the Japanese marque’s official factory team Repsol-Honda, the 22-year-old Spaniard has been dominant since stepping into the top

two-wheel category. He told the sports daily Marca that he knew countryman Fernando Alonso would be joining McLaren-Honda in 2015 before the news became official, but that the former Ferrari driver told him to keep it “secret”. Now, as Alonso prepares for his first Honda-powered race in Malaysia following his Barcelona testing crash, Marquez backed the new project to succeed.

McLaren-Honda had a disastrous start to its campaign in Australia, however, as the only running silver car driven by Jenson Button was

lapped twice. Marquez said: “In the end, I trust them. Honda is Honda, and logically, a new project like that has an adjustment process.”

He said he is not worried the McLaren-Honda crisis could mean Repsol-Honda boss Shuhei Nakamoto, once a leading technical figure in F1, could be recalled to the F1 paddock. “No, I don’t think so,” said Marquez. “I think F1 is a project that could even be good for us. The technology that is used in formula one, maybe someday we can be using in MotoGP.”

Finally, Marquez ruled out ever switching from MotoGP to F1. “No. Maybe I would like to experience it, but it would be only a few laps and no more,” he insisted.