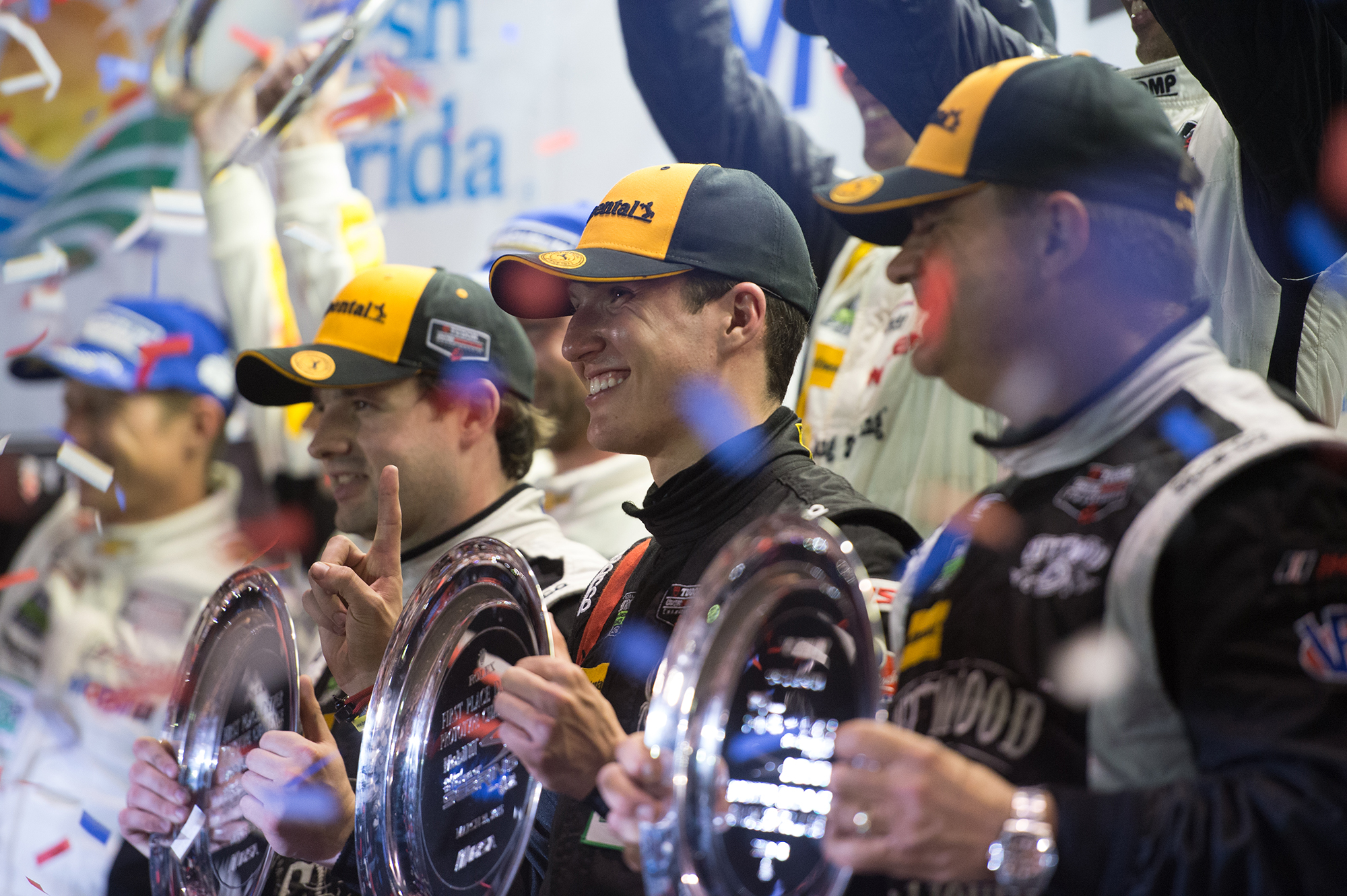 Andrew Palmer made it two Prototype Challenge class wins in as many TUDOR United SportsCar Championship rounds on Saturday by adding another endurance racing classic – the 12 Hours of Sebring – to his list of rookie victories. It also saw the Pomona College, CA, student complete the coveted ’36 Hours of Florida’ grand slam within just two months after triumphing at the North American Endurance Cup curtain raiser at Daytona in January. And all at the age of just 20.
But by Palmer’s own admission Sebring’s result was far sweeter after he and co-drivers Tom Kimber-Smith and Mike Guasch controlled much of the race aboard their PR1/Mathiasen Motorsports Oreca-Chevrolet to come home a remarkable sixth overall and 11 seconds clear of their nearest PC class rivals. The trio lined up third in class on Saturday afternoon, albeit less than two-tenths shy of pole. Kimber-Smith initially tracked the leaders throughout his opening stint before making way for Guasch, who continued the good work.
Palmer’s first taste of the ex-USAF airbase in racing conditions came at the quarter distance mark after Guasch had completed his opening stints behind the wheel. The timing of the stop had coincided with a caution period and Palmer re-joined in second place, before taking the class lead at the restart with a decisive move into turn one. He was then able to edge clear of the pursuing pack over the course of his double stint, before first Kimber-Smith and then Guasch cemented the car’s half-lap advantage until Palmer climbed aboard again for the hours of dusk.
But the crew’s hard work would almost prove in vain as the race entered its final hour when another caution period slashed their lead to just half a second. The team’s decision to spurn fresh tyres in favour of fuel only and a faster final pit-stop gave them track position and breathing space. And despite their freshly-shod pursuer’s best efforts, that ultimately allowed Kimber-Smith to take the chequered flag in relative comfort.
“Winning Sebring felt completely unreal,” explained Palmer afterwards. “Daytona was great but because we took the lead so late it didn’t feel like we’d actually scored victory. This is totally different; all the emotions were there when Tom crossed the line and we could celebrate together as a team. It’s a super special feeling. As a crew we always thought we’d have the pace and car underneath us to challenge. Tom knows what it’s like to win big races, but also how lucky you need to be over 12 hours around such a narrow, bumpy and fast circuit. We had a couple of scrapes but nothing major, and the car ran like clockwork throughout. For that I take my hat off to PR1/Mathiasen Motorsports because they’ve done a fantastic job, not just during the good times but also when we looked down and out at Daytona.”
As Saturday nights out go, Palmer’s should stack up pretty well in comparison to his Pomona College classmates who he re-joined on Monday morning. Not that he’ll be back behind a desk for long. “We couldn’t have asked for a better start to the North American Endurance Cup campaign and fingers crossed we’ll pick up where we left off when the championship continues at Watkins Glen in June,” he said. “But for the next few months my focus switches back to Lamborghini Squadra Corse’s Blancpain Endurance Series programme in Europe. We’ve got a two-day private test scheduled at Vallelunga in Italy early next month when we’ll be shaking down the cars for the opening round. Plus I’ve got a mountain of college work to get through!”
The opening round of this year’s Blancpain Endurance Series takes place at Monza in Italy on April 11/12.