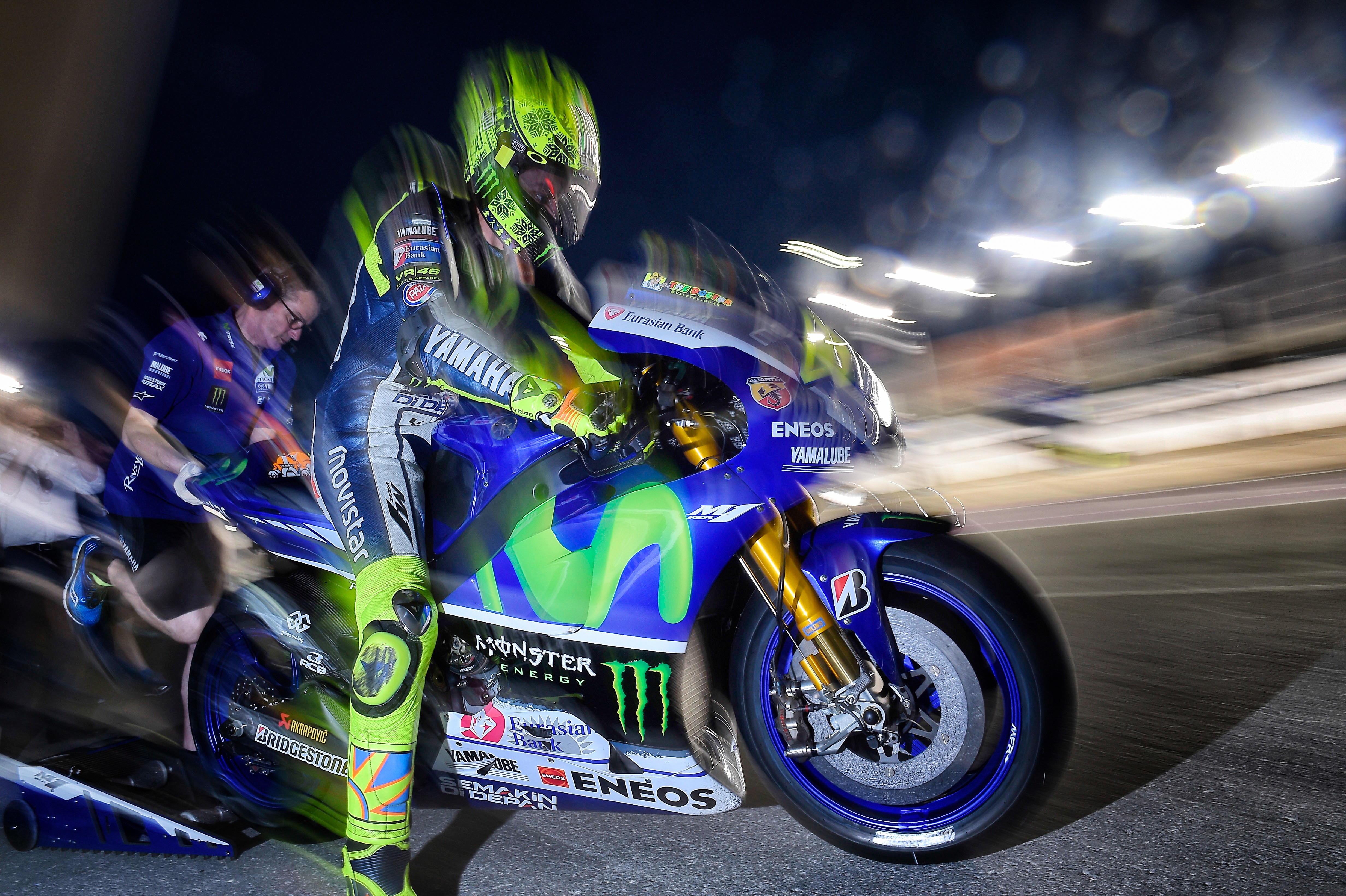 After more than four months since the last GP, the waiting is finally over. Movistar Yamaha MotoGP heads to Qatar to kick off the first MotoGP Grand Prix weekend of the 2015 season this weekend, held under the famous floodlights of the Commercial Bank Grand Prix of Qatar. It was only a week ago when riders Valentino Rossi and Jorge Lorenzo were at the Losail International Circuit to complete the final pre-season test, which was cut short due to a sudden rainstorm. Despite this unfortunate turn of events, both riders had very positive results during the winter tests. The 2015 YZR-M1, with a new gearbox, has shown great promise in both Qatar and Sepang and the teammates find themselves in good shape for this season‘s title challenge.

Nine-time World Champion Rossi is looking forward to riding at the Losail circuit and is ready to put on a show like he did in the previous two years when he had some fantastic battles with rival Marc Marquez. This year the Doctor aims to further improve his already great record of three wins and four second places at the opening round.

Teammate Lorenzo also arrives in Doha with great confidence and is eager to fight for victory at the starting race. The double premier class World Champion certainly knows his way around the track, having taken Qatar victory in 2012 and 2013. He also claimed

The Losail International Circuit was built in little over a year on the outskirts of Doha, before being added to the MotoGP calendar in 2004. It wasn‘t until four years later that the track became the first and only circuit in MotoGP to host a night-time Grand Prix. The MotoGP field will race 22 laps on the 5.4km track. The combination of medium and high-speed corners and the fast flowing nature of the circuit is well-suited for the nimble YZR-M1, while the iconic, over a kilometre long, main straight and steep first corner are

bound to cause some spectacle when twenty-five riders dive into the first corner together for the first time this season. As the only night race of the year, the schedule of the race weekend is slightly different from the usual. Besides the Friday Free Practice session there will be an extra session on Thursday to make sure riders are ready for action.

Valentino Rossi: “I am very happy to leave for the first race of the season after many days of testing. I am very satisfied about the tests. The bike has improved a lot, but we still have a lot of work to do. Unfortunately we could not finish the test due to rain and it will be important to resume work on the bike where we had stopped. It seems that in Qatar there will be many fast riders, so we‘ll all be very close in times. At least that’s what the tests told us. I am very excited to start this season. I’m ready, I feel good and also my team is ready. They are all very motivated!”.

Jorge Lorenzo: “The pre-season is over and I look forward to racing as soon as possible. We‘ve completed a very positive preseason with some benefits in terms of new, mechanical parts and also in terms of performance. We did a great job in both the Sepang tests and we got some clear ideas how to improve the bike. Then we visited Qatar a few days ago but unfortunately there, a track that usually suits our YZR-M1 better, we struggled a bit to get the best set-up. Finally we lost the final day because of the rain and that was a pity, but now we face the first challenge of the championship, the real game, and we go to Losail eager to fight for the first victory. I want to forget what happened there one year ago with the crash in the first lap of the race. Fortunately this year we‘ll arrive in a better shape and we can do even better in the first part of the season so we are quite positive for the starting race”.

Massimo Meregalli, Team Director: “After the winter tests we are finally going to kick off the championship and we‘re really looking forward to it. We had some good tests in Sepang and Qatar so we are ready to begin. We are going to start from where we stopped last week, so our schedule is already set. Because of the rain on the last day of testing in Qatar last week we couldn‘t test what we wanted to prepare, so that‘s going to be our starting point. Losail is a circuit that suits the Yamaha well so for this reason we are feeling very confident and so are the riders. Vale and Jorge are in great physical shape and the team is excited too. The competition is going to be closer than ever this year, so fans can expect really exciting racing from the first round. Let‘s start the season!”.