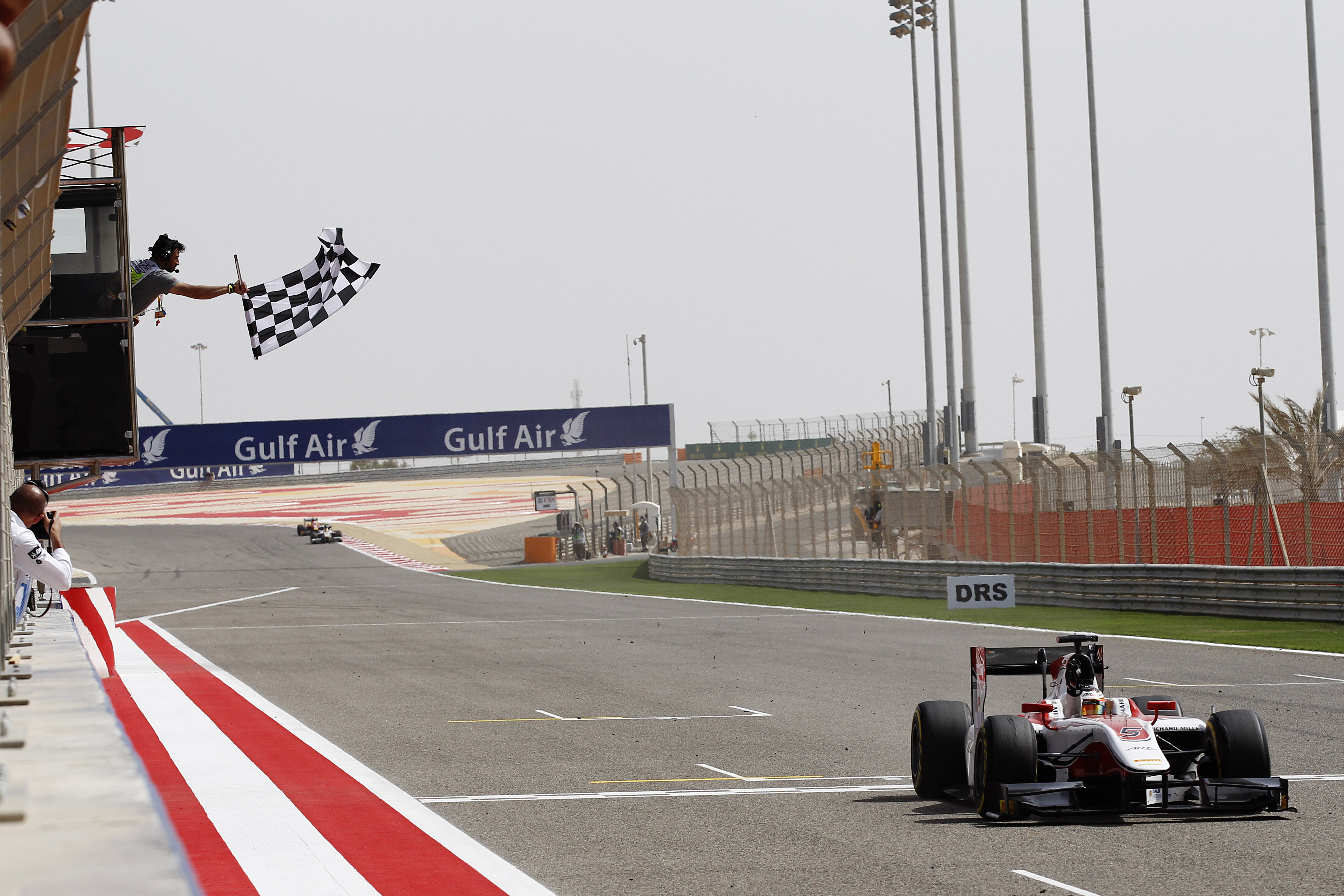 McLaren F1 test driver Stoffel Vandoorne won this afternoon’s feature race in Bahrain from pole position, but the victory came against the odds: an early safety car period gave his soft shod rivals a free pitstop, but the Belgian kept his nerve to drive back into contention and claim the win late in the race ahead of Rio Haryanto and Alexander Rossi.
Vandoorne had an easy start when teammate Nobuharu Matsushita bogged down next to him on the front row, with the Belgian easily holding back Alex Lynn and Norman Nato, while Raffaele Marciello and Arthur Pic lined up behind them. With Vandoorne tearing away at the front the battle was heating up behind him: Marciello and Nato were fighting fiercely, which allowed Pic to sneak through, but the pair came together and tapped Pic into a spin, while a following Pierre Gasly had nowhere to go, with the four drivers into the wall and a safety car out for the clean-up.

This gave the soft shod drivers a free stop: Lynn came in from second as Vandoorne watched forlornly, and looked to have the advantage until fast work by the Racing Engineering team got Rossi out ahead of the Williams test driver, with Mitch Evans behind the pair. At the restart the Belgian streaked away again, taking Haryanto with him as they tried to build as big a lead in clean air as they could, while the pitstopped drivers carved their way through the field on fresh rubber.
Rossi did a great job of this, although an impact between Lynn and the American (and between Evans and Marlon Stockinger) saw his rivals struggle to keep pace. Rossi was up to P4 and just 10 seconds back by the time Vandoorne stopped on lap 22, with Haryanto in the next time through, and the Belgian was almost 20 seconds behind with 10 laps to go. The race looked to be done, but no one told Vandoorne: he sliced his way back into contention lap by lap, taking the lead with two to go as the American’s tyres couldn’t help him anymore.
Vandoorne rolled across the line five seconds ahead of Haryanto, who stole Rossi’s position in the final complex before the chequered flag, with teammate Jordan King driving a strong race to finish P4 on his debut. Fellow rookie Robert Visoiu drove a great race on Vandoorne’s strategy for 5th, ahead of a solid recovery drive by Matsushita, with Evans struggling home on shot tyres holding off tomorrow’s poleman Nathanaël Berthon, while Julian Leal and Andre Negrao rounded out the points ahead of tomorrow morning’s sprint race.
2015_04_BRN_GP2_R1_Timing_Race1PreliminaryClassification_V01