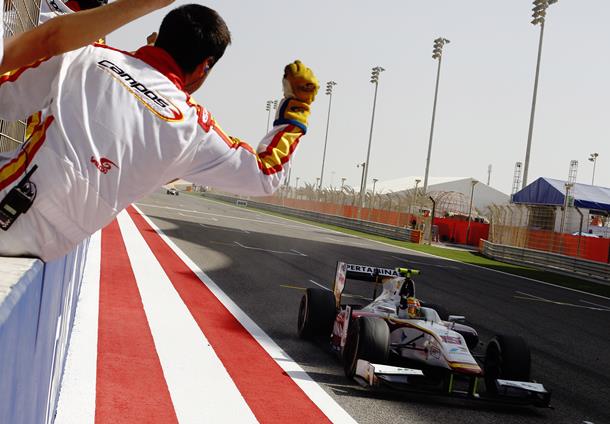 Rio Haryanto claimed his long overdue maiden win with a mature drive in Bahrain, overtaking early in the race and then cruising off into the distance to win by 3 seconds from McLaren test driver Stoffel Vandoorne and Nathanaël Berthon. The win was set up at the start with an impressive getaway from seventh on the grid: poleman Julian Leal made a decent start while fellow front row starter Berthon stuttered, with Mitch Evans just failing to pass the Colombian into the first corner and Haryanto sweeping into P3 ahead of André Negrao, Robert Visoiu, Nobuharu Matsushita and Vandoorne.

Haryanto was soon on a charge, blasting around the outside of Evans at turn one on lap three while Vandoorne started to slice through the field as he chased a second podium for the weekend. Four laps later the Indonesian made short work of Leal as he blasted into the lead on the outside of turn one once again, and started building a gap over his pursuers.
Evans had a go at Leal the next time through but the pair came together, with the New Zealander having to limp back to the pits after picking up a puncture on Leal’s broken front wing endplate: the Colombian was unable to hold back his rivals and was concentrating on bringing home something for his efforts, with Vandoorne slicing through them all, with Alexander Rossi following in his slipstream.

As the laps rolled down tyre management was coming to the fore, but Haryanto used his experience to hold position: Vandoorne didn’t have enough to catch the Indonesian but his second podium secured his lead in the points, while a fast charging Berthon had bided his time and put his fresher rubber to good use by moving from P7 to P3 in the closing laps, stealing a podium from Rossi on the last lap. Leal did a good job to finish fifth after his struggles, ahead of Matsushita, Visoiu and Negrao.
Vandoorne leads the drivers’ championship after the first round ahead of Haryanto, 43 points to 33, with Rossi in third with 23 points ahead of Berthon on 16, Jordan King and Visoiu on 12, Leal on 10 and Evans on 8 points as the grid looks towards the next round of the championship in Barcelona.
Redazione MotoriNoLimits
2015_04_BRN_GP2_R2_Timing_Race2PreliminaryClassification_V01