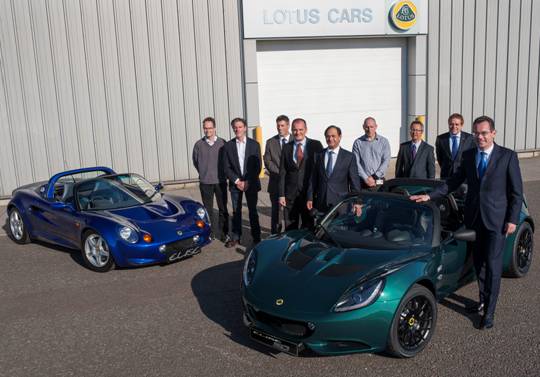 Since the unveiling of the pioneering and ground-breaking Lotus Elise in 1995, Lotus has reached another production landmark. No less than 40,000 examples have been produced of its technologically advanced “small car platform”, epitomised by the brilliant Lotus Elise, which has maintained exceptional standards in light weight and efficiency, while producing a benchmark in handling, to result in a pure driving experience.

The “small car platform” and its sheer production flexibility is defined by the various models based on it, which have included the Lotus Elise, Exige, Europa, 2-Eleven, 340R and racing variants. In being the first carmaker to use extruded and bonded aluminium, Lotus revolutionised the industry and it has become a method that is being widely adopted amongst the rest of the motor industry. In the meantime, Lotus continues to refine and develop its own lightweight structure currently weighing just 68 kg.

The landmark has not been achieved without considerable effort, as outlined by Jean-Marc Gales, CEO, Group Lotus plc: “The small car platform was a landmark development in 1995 and developed at the right time in the company’s history. Yet, in an environment of continuous improvement, while a correlation exists between today’s platform and the first of the lightweight, bonded and extruded aluminium structures, it has altered radically. It remains a benchmark in light weight and efficiency and is as advanced and market-leading today as it was 20 years ago.”

The small car platform underpins the current Elise and Exige models, with the same aluminium extruded and bonded technology used in the new Lotus Evora 400. Outstanding structural rigidity ensures that

Lotus benchmark handling is uncorrupted, which underscores the pure driving experience that enthuses owners, racers and the motoring media.

Jean-Marc Gales continued, “We are especially delighted that the 40,000th version of our small car platform will underpin, appropriately, an Elise 20th Anniversary model, the latest Elise model that celebrates our landmark achievements. Looking to the future, the platform will continue to be developed, improved upon and form a solid and dependable base for future new models demonstrating the production flexibility of the technology and its importance to Lotus.”