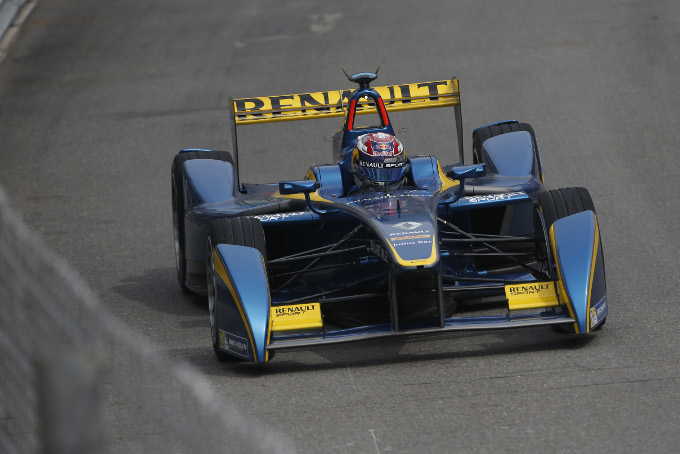 Two records ended in Monaco. Firstly, for the first time ever, the driver on pole position managed to convert his qualifying advantage into a win. Secondly, there is finally a double winner in Formula E. The driv

er to break this jinx was Sebastien Buemi. The e.dams-Renault racer made a good start from pole, which meant he was well clear of the carnage that took place behind him, and held firm despite a concerted attack from Lucas di Grassi after the pitstops, to take a well-deserved win.

“To win in Monaco is a great feeling,” said Buemi. “I knew about this thing of everyone starting on pole and not winning the race, so it was good in the end to finally manage that, especially here as we could see it’s very difficult to overtake. “

The race was just one corn

er old when chaos descended. Daniel Abt and Nico Prost went wheel-to-wheel through the first turn, but as they ran down the new piece of track that leads towards the exit of the tunnel, Abt was squeezed into the wall. As his car ground into the barrier, Bruno Senna was left with nowhere to go and vaulted over the back of the Audi Sport ABT entry, flying through the air before crashing down to earth. It wasn’t exactly Derek Daly in 1980 (ask your father), but it was a big hit. “I’m a bit sore, but otherwise OK,” said Senna after his spectacular exit.

With the already narrow track blocked, many drivers were left with nowhere to go. Among those to pick up damage were Jaime Alguersuari, Vitantonio Liuzzi, Salvador Duran, Jean-Eric Vergne and Loic Duval. Buemi nailed the restart and he and di Grassi started to edge away from the field. Behind them Nelson Piquet Jr pulled a nice move on Dragon Racing’s Jerome D’Ambrosio for third. As the pit window approached, so Piquet started to reel the leaders in. At this point di Grassi opted for an aggressive strategy, pitting early in the hope of making the undercut on Buemi. A fabulous in-lap by Piquet meant it was a three-way fight for the lead as the car-swap order unfurled.

“I decided myself inside the car and told the team, I said ‘look guys I am going to go for a very aggressive first stint, going to try to gain track position, going to push like hell with the second car and after that I see what happens,” said di Grassi.

Buemi just exited the pits ahead of di Grassi. The Brazilian tried a move around the outside of the Harbour Hairpin, but Buemi held firm. Di Grassi’s earlier stop meant he had to conserve more energy, and having defending the attack from the Brazilian, Buemi was perfectly placed to add to his Punta del Este win. Piquet instantly went into conserve mode after the stops and with 10 laps remaining he had 10 per cent more battery remaining than di Grassi. At this point he was given the order to push by the NEXTEV TCR team and he responded instantly.

He closed down di Grassi using FanBoost and had a lunge that almost resulted in contact into the hairpin. But with di Grassi resolute in defence he had to settle for third. But with temperatures also a concern as he backed off so Virgin Racing’s Sam Bird closed in. The Brit hassled the Long Beach winner over the final two laps, but couldn’t make a move.

“I underestimated a little bit the track,” admitted Piquet. “Most of the tracks overtaking wasn’t that much of an issue. I thought that maybe Monaco, because a lot of people would be coasting and saving energy, we could try to overtake, but it was a little bit harder. I did manage to take a car in the beginning of the race, but I think people were more relaxed and in saving mode.”

D’Ambrosio came home fifth to keep his strong recent run going, while Prost took sixth to keep himself in the title mix. Having avoided the opening lap melee, Stephane Sarrazin scored Venturi’s best result of the season so far in its home race in seventh. Scott Speed picked up a damaged front wing during the first lap incident, but stayed out. Some fine passing on Charles Pic and Antonio Felix da Costa (Amlin Aguri) took him up to eighth, but the Andretti driver had exceeded his energy usage and was given a 33-second time penalty. This moved Pic into eighth for his first points for NEXTEV TCR and da Costa to ninth. Nick

Heidfeld was boosted into 10th, giving Venturi a double points haul at home, which has taken them above Trulli and into ninth in the teams’ championship.

In the drivers’ standings, di Grassi has stretched his lead over Piquet to four points, while Buemi has moved up to third a further six points back. Vergne made the best of a bad lot with his damaged car to score the two bonus points for fastest lap, earning himself the inaugural Visa Fastest Lap trophy in the process.