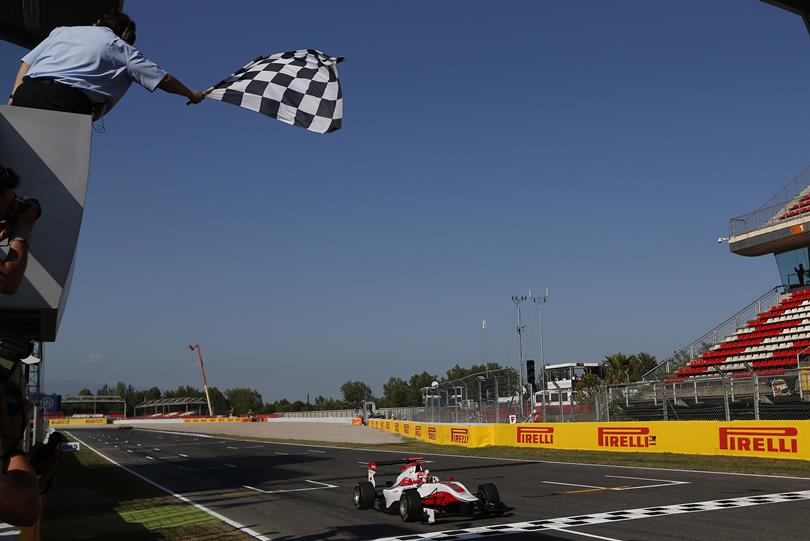 Stoffel Vandoorne held off late pressure to win a tactical feature race in Barcelona this afternoon, having just enough to deny Mitch Evans and Alexander Rossi at the end despite their softer tyres to claim the top step on the podium and extend his lead in the championship. The race was always going to be a gamble between tyre strategies: on the grid the top three (Vandoorne, Alex Lynn and Pierre Gasly) started on softs while immediately behind them Evans and Rossi were on the harder compound. With temperatures soaring once again the difference between strategies was a coin toss.

When the lights went out Vandoorne just denied Lynn into turn one, with the latter then mugged by his teammate at the next corner, while behind them the hard tyre pair held station ahead of fast charges from Arthur Pic and Norman Nato, who were split by Rio Haryanto at the end of the first lap. Vandoorne and Gasly came in from the lead as soon as they could on lap six, with Lynn pushing hard for one more lap but emerging behind the pair: all three now had to slice their way through the field to make the strategy work. The Belgian would not be denied, taking no prisoners as he fought his way forward, with the others trying to cling on to his coattails.

All eyes were on the gap between Evans, now in the lead, and Vandoorne as the leader of the formerly soft shod men, and although it was extending slightly because of the traffic it looked as though the McLaren tester was doing enough to make his strategy work. And so it proved: Rossi pitted on lap 26, Evans next time round, and the pair emerged behind Gasly and had work to do. The American led the way by the Frenchman and was soon hunting down the Belgian, 5.6 seconds up the road with 9 laps remaining. The pair caught the leader with 4 to go, but Evans had bigger ideas that a support role: he ran inside Rossi at turn one next time through and was soon hunting for more.

Unfortunately for him his soft tyres were losing their edge, and Vandoorne was in no mood to give anything away: the Belgian held on for his second win of the season from a frustrated Evans, with Rossi rounding out the podium a few seconds behind. Haryanto made good use of his softs at the end to finish in P4, ahead of Lynn and Raffaele Marciello, who both gained a place when Gasly went deep at turn one in the closing stages. Nato will be delighted with P8 and tomorrow’s pole after mugging Pic on the last lap, while Richie Stanaway claimed the final point of the race.
Vandoorne extended his lead in the drivers’ title race over Haryanto, with the Belgian on top by 72 points to 45, with Rossi on 38, Evans on 28 and Nathanael Berthon on 16 ahead of tomorrow morning’s sprint race.