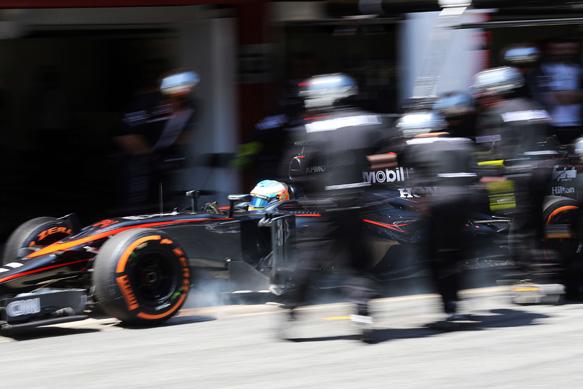 McLaren racing director Eric Boullier has raised concerns about the disposal of Formula 1 visor tear-off strips after a freak incident caused the end of Fernando Alonso’s Spanish Grand Prix. Alonso was forced to retire with a brake issue, resulting in “a scary moment” as he overshot his pit box, sending the front jack flying. The cause has now been confirmed by Boullier as a tear-off strip that lodged in the right-rear brake duct, blocking the air intake and so boiling the fluid.

“It was a tear-off, and we have video footage that shows this,” Boullier told AUTOSPORT. “It went straight into the brake duct, obstructing the airflow, so there was no more cooling and that was why, in two laps, the temperatures went through the roof. The brake fluid boiled and we lost the brakes, so it was a complete fluke the tear-off should get lodged in there”.

It is not the first time Boullier has encountered such a problem as the same occurred to Kimi Raikkonen during his time at Lotus in the 2013 Belgian GP. “To be honest, I remember the same stupid thing happened with Kimi, that a tear-off went into the front brake,” added Boullier. “Obviously the drivers need them, but we need to maybe think about how and where we throw them. Maybe we need to think about something for the future.”

Boullier has expressed relief the front-jack man was uninjured after showing lightning reflexes to avoid being run over by Alonso. “Everybody knew Fernando had brake issues,” added Boullier. “The brakes had started to fall off the cliff when he came into the pitlane. Obviously it was a very good reaction from the front-jack man. Thankfully nothing happened to him”.