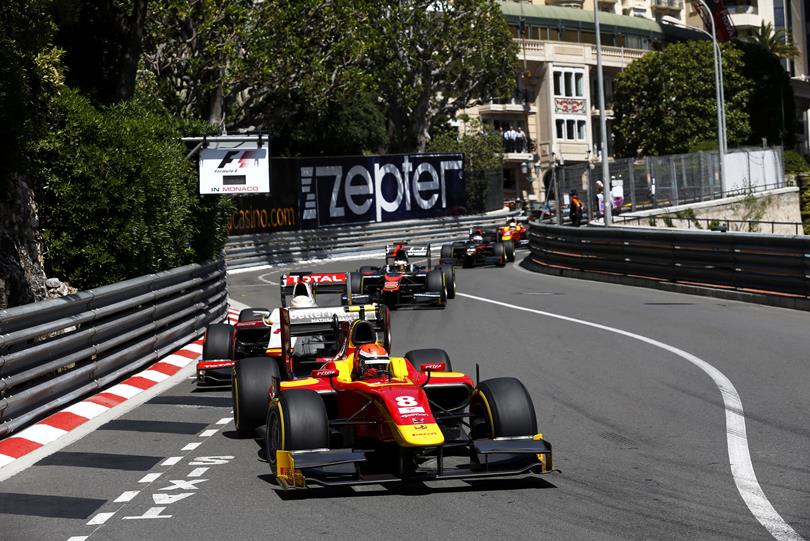 It’s a happy day for Richie Stanaway: the rookie has claimed his and his team’s maiden GP2 win controlling the race from start to finish with a display of maturity and calm driving. Behind him, Raffaele Marciello and rookie Sergey Sirotkin completed the podium. The victory was set at the start when Stanaway had the perfect getaway whilst poleman Marciello was sluggish away from the line. The Kiwi made quick work to build a two second gap which was enough to keep the Italian at bay. Behind the pair, Sirotkin made a great start to move past Julian Leal and take third.

As the pack went down turn 6, Rio Haryanto was squeezed in between Rene Binder and a charging Norman Nato. The contact was unavoidable and sent the Indonesian into the barrier. There was more drama at turn 7 with a collision between Zoel Amberg and Johnny Cecotto, with both men retiring. After a brief Virtual Safety Car period, Stanaway focused on building a four second gap to Marciello, whilst the Italian was busy keeping his deficit to Sirotkin. Behind them, Leal was under pressure from Sergio Canamasas who was clearly hungry for more than fifth place: just as he did yesterday to Arthur Pic, the Spaniard found his way past Leal at turn 1. After his bold move, he was unable however to close in on Sirotkin and had to settle for fourth.

There was a second Virtual Safety Car period in the closing stages when Jordan King tried to overtake Pierre Gasly at the exit of the tunnel, but went airbone after tagging the Frenchman’s car. But this did not mess with Stanaway’s concentration and the GP3 graduate punched the air in delight after taking the chequered flag two seconds ahead of Marciello. Sirotkin finished third and enjoyed his first rostrum in the Series. Canamasas, Leal, Pic, Alexander Rossi and Stoffel Vandoorne took the remaining points. Thanks to his eighth place and the bonus points for fastest lap, Vandoorne has extended his lead in the drivers’ standings over Rossi, 114 points to 70. Haryanto remains on 49 points ahead of Evans on 28 – the Kiwi was unable to take part in the race following electrical issues. Alex Lynn is fifth on 25 points ahead of Marciello on 24 points.