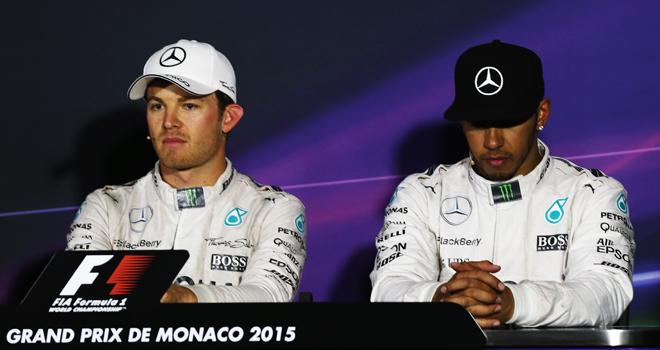 Nico wins in Monaco to make it a hat-trick of wins in the principality, with Lewis completing a double podium in P3

Nico Rosberg: “That was my luckiest experience in racing so far. What a crazy race. I was surprised when I saw no one else behind the safety car than me. I didnt know what was happening in that moment. But I concentrated on getting temperature into the tyres as they felt like ice. Until the safety car Lewis has done a perfect job, he was better than me over the weekend, so he definitely deserved the win. I know how horrible he must feel now. This weekend was a warning for me that I have to work even harder for the next race in Montreal. For sure I also feel happy to win again here in Monaco. It’s always so special, and one part of me will celebrate that victory today. A win is a win”.

Lewis Hamilton: “I can’t express the way I feel at the moment. I saw the team out in the pit-lane on one of the screens and thought Nico was pitting. I came in with full confidence that the others had done the same. This is a race that’s been close to my heart for years and it’s special to me, so I really wanted to win. The team have been brilliant all year, so I don’t blame them. We’ll analyse and work out what went wrong, but we’ll do that collectively and try to improve for the future. I always say to my team and my fans, we win and we lose together. You live to fight another day”.

Toto Wolff, Head of Mercedes-Benz Motorsport: “What a crazy day. I don’t think there has ever been a more bittersweet feeling than this one. We have won the Monaco Grand Prix and we have lost the Monaco Grand Prix all at the same time. First of all, we must apologise to Lewis. We win and we lose together and what I am proud of in this team is that we take collective responsibility. But this is a day when we simply have to say sorry to our driver, because our mistake cost him the victory here. What happened? In simple terms, we got our numbers wrong. We thought we had the gap for Lewis to take fresh tyres and come back out in the lead behind the Safety Car, ahead of Nico and covering off any

risk of another competitor taking fresh tyres. But the calculation was incorrect and he came out in third place. It was our decision to call him in and our mistake, pure and simple; in these situations, a driver trusts his team. Lewis had driven flawlessly until then and really delivered a perfect weekend, with a stunning pole lap and a masterful race. There’s nothing more to say other than to highlight the grace with which he handled the situation; he was a leader and a true sportsman this afternoon. As for Nico, he didn’t put a foot wrong all day, and it would be wrong if we didn’t take the time to recognise his achievement: a third consecutive win in Monaco is something only three other drivers in history have

achieved before. It is a very special moment indeed and one for him to savour. He didn’t have the pace of Lewis today but, in this sport, you take the victories any way they come. This, too, is motor racing. We now need to stay calm and analyse how we made the mistake this afternoon. We will be harshly self-critical behind closed doors and this experience will make us a better and a stronger team in the races ahead. There is still a very long way to go in this championship and today showed that we have the performance in our car to do the job this year”.