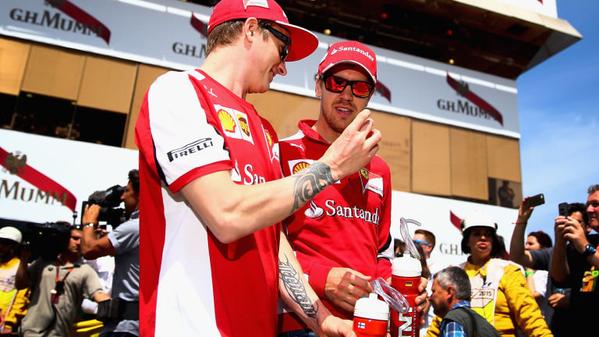 Sebastian Vettel has thrown has voice behind Kimi Raikkonen’s bid to keep his seat at Ferrari. The pair united as friends at the fabled Italian team in 2015, but while German Vettel has become the star driver, Finn Raikkonen is still struggling to regain his form of old. So the candidates to replace him are lining up, even though boss Maurizio Arrivabene said Red Bull’s Daniel Ricciardo may not be among them.

“Perhaps he does not have my number,” the Italian told La Gazzetta dello Sport. But “If I gave you the list of drivers who have called since the start of the season, (Valtteri) Bottas is just one of many,” said Arrivabene, confirming the hottest of the speculation. The Ferrari chief said that, at present, both Ferrari seats are “full”, but it is well known that Arrivabene and president Sergio Marchionne are considering not triggering the option in Raikkonen’s expiring contract. Results, Arrivabene admitted, are king. “Raikkonen’s fate is in his hands,” he said. “He has to prove that he deserves a Ferrari, as it is something you have to earn in each race.”

In this key period in his career, 2007 world champion Raikkonen, now 35, has made apparently basic driving mistakes not only in Canada but again in Austria. “When he deserved compliments, I did that,” Arrivabene said, “and when it was necessary to reprimand him, I did that too.”

But if teammate and friend Vettel has a word in the matter, he made clear he is backing Raikkonen. “Kimi will soon return to being the driver we all know,” the German was quoted by Sky Italia during a promotional visit to Budapest. “He is going through a season of ups and downs, but we are talking about a talent that can do his job to perfection. It’s true that this year he has made some small mistakes but in certain circumstances he was also unlucky, so I think the situation should be considered in proportion. Obviously I’d like to continue with him. We have an excellent relationship and we motivate each other, but it’s not for me to decide and I don’t know the details. What is certain is that Ferrari will make the right assessment for the future”.