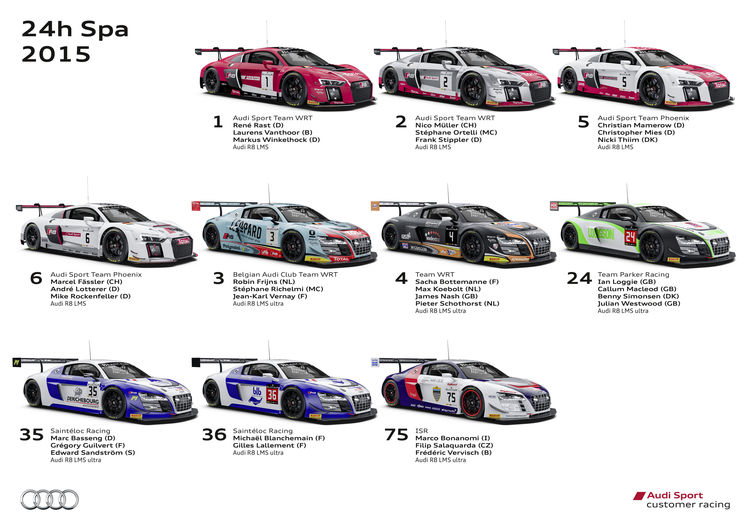 The new Audi R8 LMS is facing its toughest test so far: the 24-hour race at Spa, Belgium. On July 25 and 26, the race car has to stand its ground in a large field made up of 58 GT3 race cars from eleven marques. The 68th running of the endurance race will be the final test before production of the Audi R8 LMS starts.

In September, Audi will start producing the new Audi R8 LMS for its customers. The fundamentally redesigned production-based race car instantly won its first 24-hour race at the Nürburgring in May. Now the second test in endurance racing is coming up on the Spa-Francorchamps circuit in the Belgian Ardennes. Only after this test will Audi determine the final specifications.

“The races at Spa and at the Nürburgring are not comparable. The Spa 24 Hours are part of the Blancpain Endurance Series in which, due to the regulations, a different rating of the various race cars applies than at the Nürburgring,” says Romolo Liebchen, Head of Audi Sport customer racing. The teams work together with a different tire manufacturer who is mandatory for all the participants in this series. These differences should not be underrated, according to Liebchen. “Still, we’re going to try everything we can to continue our success and have put ourselves in a strong position in terms of technology, the teams and the drivers. Following the race at Spa, we’ll be ready for the production launch.”

Audi won the iconic event at Spa in 2011 and 2014 with Vincent Vosse’s Belgian Audi Club Team WRT and in 2012 with Ernst Moser’s Phoenix Racing team. Each of these two squads is fielding two new Audi R8 LMS cars this year. Four high-caliber driver lineups will be tackling the challenge in the production-based mid-engine sports car. Last year’s winners René Rast, Laurens Vanthoor and Markus Winkelhock will compete in car number ‘1.’ In the sister car of WRT, Nico Müller, Stéphane Ortelli and Frank Stippler, who are bringing a wealth of experience from further 24-hour victories at the Nürburgring, at Spa and Le Mans to the event, will be taking turns at the wheel.

Ernst Moser relies on six 24-hour race winners as well. Three Le Mans winners – Marcel Fässler, André Lotterer and Mike Rockenfeller – are forming a driver squad at Phoenix. In addition, Fässler mounted the top step of the podium at Spa in 2007. Christian Mamerow, Christopher Mies and Nicki Thiim, who are sharing another cockpit at Phoenix, have previously recorded Nürburgring victories in their career histories.

Thanks to its customers Audi is equalizing its top number of ten race cars fielded at Spa in 2012. The four teams, WRT, Parker Racing, Saintéloc Racing and ISR, are fielding six other Audi cars. They are battling for success and championship points in the Pro Cup, Pro Am Cup and Am Cup classifications with their drivers. The customer teams rely on the successful Audi R8 LMS ultra. In total, more than 30 Audi drivers will be on the grid of the Spa 24 Hours. Audi Sport customer racing supports all teams with services, spare parts and customer racing consultants.