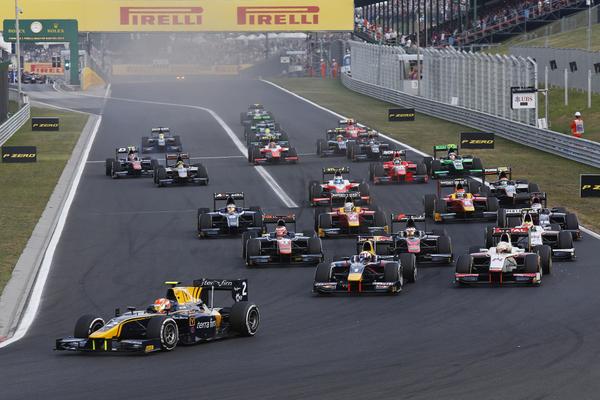 Alex Lynn put on a crushing display of speed and guile to claim his first GP2 feature race victory in scorching conditions this afternoon at the Hungaroring, leading for most of the race and picking the right tyre strategy to win ahead of DAMS teammate Pierre Gasly and Sergey Sirotkin.

The Williams test driver made great use of pole position, blasting away when the lights went out and taking an easy early lead as fellow front row starter Stoffel Vandoorne stuttered: Red Bull tester Gasly made a brilliant start from P5 to follow his teammate into turn one, while Arthur Pic and Raffaele Marciello went either side of the the McLaren man to follow the leaders through.
The Italian jumped the Frenchman next time by, just before a brief safety car period to recover Sergio Canamasas’ broken car, and the race

was live for just two laps before the pitstops started for the soft compound drivers: Vandoorne was the first man in, followed by Julian Leal, but the series leader was judged to have been released unsafely and was handed a 5 second time penalty for his efforts, while out on track Lynn, Gasly, Marciello and Sirotkin were pulling away from their rivals.
With all eyes on the time gap between Lynn and Vandoorne the question was could they maintain a gap large enough to hold onto the lead? By the time the Briton came in on lap 23 it was clear that they hadn’t: Lynn emerged behind Pic in (effectively) P, but he had the advantage of fresh soft rubber and wasn’t going to hang around. Lynn slid past the battle between Pic and Alexander Rossi almost immediately, and easily claimed Haryanto a few laps later for what was effectively the lead, given Vandoorne’s penalty.

It wasn’t enough for the Briton: he blasted by Vandoorne with 5 laps remaining to lead on track, and with the other soft shod men coming the question was how would the Belgian hold them back? Haryanto wasn’t helping his cause – the Indonesian was looking for a way through all round the circuit – but Gasly sliced by them both on the penultimate lap for P2 behind his teammate, with Vandoorne third on track but dropped to P5 on the timesheets behind Sirotkin, who clattered his way past Haryanto at the second last corner, removing the Indonesian’s front wing in the process.
Jordan King had a solid race for P6, jumping Marciello on fresher rubber, with Nobuharu Matsushita, Robert Visiou and Daniel de Jong also taking advantage of stopping for softs late in the race. The result didn’t affect the top of the drivers’ championship substantially – Vandoorne now leads Rossi by 180 points to 105, with Haryanto on 103, Sirotkin on 93, Lynn on 85 and Gasly on 60 points – but there is plenty of scope for more to come in the sprint race tomorrow morning.
Redazione MotoriNoLimits