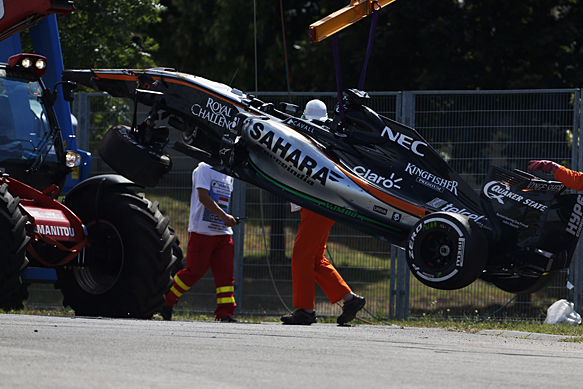 The Force India Formula 1 team’s reliability and design integrity has not been compromised by its two failures at the Hungarian Grand Prix, says deputy team principal Bob Fernley. The team introduced a B-spec car at the British Grand Prix, with Sergio Perez and Nico Hulkenberg giving the machine a double-points scoring debut. But the Hungarian GP weekend was tougher. Perez rolled the car in first practice after a right-rear suspension failure and Hulkenberg crashed during the race after his front wing failed.

Force India identified the problem that afflicted Perez and introduced a fix for the following day and Fernley echoed chief operating officer Otmar Szafnauer’s belief the team will find a fix for the issue on Hulkenberg’s car. When asked if he was completely confident there will be no repeat, Fernley told AUTOSPORT: “Completely. Reliability and design integrity are two of the key strengths of Force India, and I don’t think that has been compromised. It’s just unfortunate it was a weekend when we had a couple of incidents that were high profile.”

There are three-and-a-half weeks until the next race, which takes place in Belgium, and Fernley is confident that will give the team enough time for a complete analysis into the incidents, despite the mandatory two-week factory shutdown falling within that period.

“We’ll have those all finished off this week, and we don’t expect anything major,” he said. “We can expect a slight strengthening of the parts in different areas and then we will be fine.”